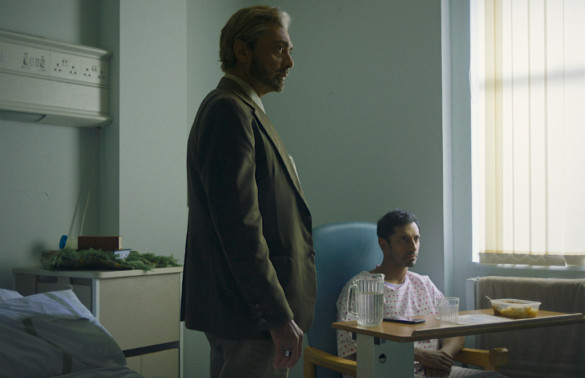 Synopsis: On the brink of his first international tour, Zed, a British Pakistani rapper, decides to fly home to the UK to visit the family he has not seen in two years. While trying to reconnect with his parents, he is suddenly struck down by an autoimmune disease.

Passion projects are usually hit and miss, but with Riz Ahmed’s latest film, Mogul Mowgli, I can’t remember when I last saw a project made with this much passion.

Ahmed co-penned the screenplay with director Bassam Tariq about a British-Pakistani rapper named Zed (Ahmed), who’s about to make it big before he’s forced to return home to the family and culture that he’s been quietly ostracizing for several years. It’s then that his health takes a drastic turn, and he’s diagnosed with a chronic muscle-related autoimmune condition. Opting for an experimental, chemo-like treatment in the hopes of making his upcoming tour, Zed fights to regain his strength while fighting a looming crisis of identity and has to confront how he’s been trying to remove himself from his family’s life. Identity and disability come crashing together for Zed in a movie rich with pain, shame, and transgenerational trauma.

Ahmed’s performance is potentially his best yet. During the opening moments, after we filter through the noise of a moving train and unfocused falling ash, a memory that holds significance that neither Zed nor the audience fully understands, he is seen backstage of a gig, performing his rap in a quiet, breathless voice. He then explodes onto the stage, accompanied by the beats of his music and the screams of an enraptured crowd. This characterizes Ahmed’s performance in the film – being able to maneuver with ease between the smaller, more vulnerable moments driven by an internal intensity, and when the script calls for him to be more expressive and commanding. When he raps in bed while waiting for sleep, it’s with the same edge in his voice that you heard when he was shouting into a microphone. This is how he most genuinely and honestly communicates.

Because this is so well established, it feels all the more debilitating when Zed’s ability to perform is stripped away from him. Zed’s illness is captured with uncomfortable, intrusive shots of Ahmed, whose physicality communicates the struggles Zed is having to assert control over his own body. When Zed attempts to relearn how to walk, Tariq cuts to his unsure feet, making clumsy steps. These insert shots feel disconnected from the rest of his body, further insisting on Zed’s disorientation and lack of bodily autonomy.

More than just losing control over his body, Zed’s mind starts unwinding as well. He finds himself lost in hallucinations, parties getting disorderly, the crowd of a rap battle turning against him, even imagining the displacement of Pakistanis that his family went through decades before he was born. In all three cases, Zed feels lost and powerless, and we clearly understand his fear of being overwhelmed. It’s an effective collaboration between Ahmed and Bassam; not only does their script clearly dramatize the internal struggles of Zed’s illness, but they creatively find ways to make the audience feel his panic and pain.

More than just being a physical ailment, Zed’s illness mirrors his own crisis of identity. It’s clear that Zed wants to separate himself from his Pakistani roots, and returning home is deeply uncomfortable for him. When he returns to his parent’s house, you get the feeling that looking through old family photos is less nostalgic and more of a chore. In addition, he is repeatedly confronted with his severance from his culture and religion, further alienating him in his own home environment. As a doctor tells Zed about his condition, “Your body can’t recognize itself, so it’s attacking itself.” His inability, or refusal, to engage with his cultural history is bit by bit destroying him. His illness as a metaphor is not particularly subtle, but it is effective, making his condition feel even more personally damaging.

For these reasons, Mogul Mowgli can be a trying watch. Scenes drag you down to Zed’s emotional and physical rock bottom, and it can be exhausting watching all the possible escapes from Zed’s hell be snuffed out one by one. Outside of Zed’s journey, we get a little glimpse of other characters or storylines, and therefore there are few distractions from his torment. It’s a film with a singular focus, but it goes about it in an inventive way, and it’s obvious to see why Ahmed invested so much effort into this worthy project.