Movie Review: ‘Education’ is the Perfect Ending to an Anthology of Strength and Reckoning 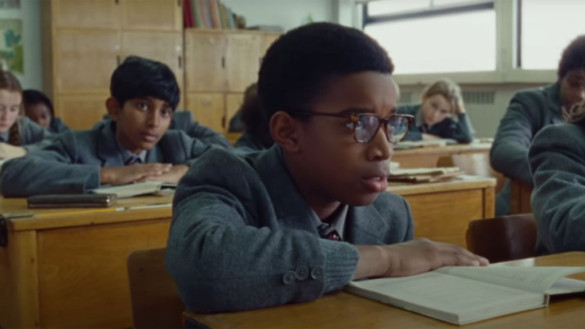 Synopsis: Part of Steve McQueen’s “Small Axe”, an anthology of decades-spanning films that presents various lives in London’s West Indian community, Education follows 12-year-old Kingsley, who is being sent to a school for those with “special needs”. West Indian women take matters into their own hands to fight against an unofficial segregation policy at play.

Steve McQueen has created a masterpiece with Small Axe, a five-film anthology that illustrates the experience of the West Indian community in the London of the 1970s and 80s. The latest and last addition to the series, Education, is the perfect final thread that illustrates the astounding ways in which Black people have been targeted by a deeply racist system. With this entry, Small Axe cements its cultural importance and resonance about past and current injustices in Britain.

Education focuses on Kingsley (Kenyah Sandy), a young boy that dreams of becoming an astronaut. Busy parents and a big sister that is focused on her future as a fashion designer from his immigrant family. His time in school is difficult because he struggles with his reading abilities and is constantly bullied by his teachers.

After a mischief, Kingsley is sent to what is presented as a special needs school. Nevertheless, after the appearance of active members of the West Indian community that have gone through the same process, the family learns that this shift in his education is actually inspired by an unofficial policy of segregation, and Kingsley – as many Black children – was actually sent to an “educationally subnormal school” under the real reason that he was affecting the academic standards of his original institute just by being a West Indian child.

Although not based on a true story, Education succeeds in presenting the reality of hundreds of Black children in the United Kingdom through an intimate story. Precisely the movie exposes the fragility of families wanting to fit in the local system by trusting blindingly in the authorities that are supposed to help them.

Through direct and cynical actions –  not teaching the students to read, laughing at their failings, carrying out the segregation policy under false pretenses –, the educational system promotes the underdevelopment of Black children, encouraging them to give up their dreams and embrace unskilled jobs. Usually, the children and their families accept this, not because they cannot do it, but because the system manipulates them into thinking this.

While the previous movies offered a critical eye on the institutions of law and order (Mangrove; Red, White and Blue; Alex Wheatle) and child protection (Alex Wheatle), Education focuses on learning institutions. The movie continues to present the injustices of a system that wants Black people to fail – a common theme throughout the series – and shares a distinctive style with the personal and discreet Alex Wheatle. Both movies show how Black children are shaped by the institutions that were created to help them.

Nevertheless, while Alex Wheatle’s life is deeply affected by British institutions, Kingsley’s story is more hopeful by counting on an effective support system that gets involved before it is too late. In this respect, and while the anthology has showcased the weight and importance of a united community, this is the story that feels like a good-natured tribute to those people that fight for others while trying to preserve their history. This story belongs to Kingsley as much as it belongs to those that save him.

In addition, Education celebrates being Black and the rich history that characterizes the Black community. While public schools teach a white-centered point of view, the movie reminds us of the history that is not usually taught in schools but that is vital for the spiritual and cultural development of children.

As with the other four movies, McQueen has created something special in Education, forming an enriching palette of experiences never seen on the screen before. The script, written by McQueen and his constant collaborator, Alastair Siddons, is affecting and moving, fortified by committed and emotional acting.

Sharlene Whyte deserves special mention as Agnes Smith, Kingsley’s mother. Her evolution of being a hard-working mom weary of her son’s misconduct to a determined and patient mother that understands the needs of her son is moving and encouraging. All the scenes that take place within the Smith household during the second half of the movie are extremely touching.

Education provides a close eye to the ways the British system mess up with Black people, this time since an early age of their lives, forever shaping their future and opportunities. Nevertheless, more than a weapon of exhibition, this last entry in the Small Axe anthology is a celebration of the Back community that is ready to protect its members in need.