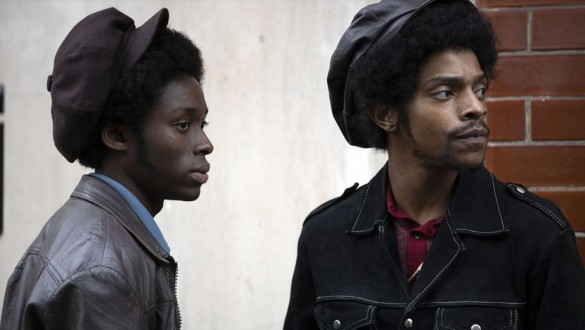 Steve McQueen has offered us a privileged view into the British Black experience during the 70s and 80s through his Small Axe anthology. His newest effort, Alex Wheatle – the fourth of five projects – continues with his crude vision, now focusing on the famous and revered British author, and exploring his early years that led him to become a successful author and recipient of an MBE for services to literature.

This movie examines the life of a Black man that is constantly affected and shaped by the public – and overwhelmingly white – institutions. This character is an example of the needs of the Black community that are analyzed in Red, White and Blue, another title of the anthology. People like Alex Wheatle were in dire need of public workers that understood their necessities and concerns, and more importantly, that offered empathy and care to those under their watch, things that Alex never received.

When we meet Alex Alfonso Wheatle (Sheyi Cole in his impressive debut), he is an illegitimate and scared child that lives under the shadow of an abusive caretaker in a public orphanage. Injustices, mistreatment, and racism shape his experience in this environment, only relieved by the African and Reggae music that he deeply adores.

Once he becomes a young adult, he moves to Brixton, London, where his life adapts to the local Caribbean community, propelled by his new friend Dennis (Jonathan Jules). Alex’s attitudes and thoughts contrast clearly with those around him. Whether it is the way he talks and walks, his out-of-fashion haircut, his complete ignorance of the current slang, or his naïveté regarding the relationship with policemen, it is evident that Alex has lived in a bubble that neglected his history and rendered him useless to the realities of life and the community issues.

Consequently, his perspective on life, love, and social justice go through a transformation, fed by his new-found liberty and the people that offer him a different way of living. He is introduced to the culture that celebrates its ancestors and origins, as well as the crude reality of institutionalized racism – although he experienced it before, he witnesses the way it affects the whole community, not just him – and race-profiling, similar to what we previously observed in Mangrove.

It is no surprise then, that after the Brixton Uprising of 1981 – influenced by a suspected arson that killed Black youths during a house party and that was poorly investigated by local police – Wheatle ends up in jail. Here, McQueen invites reflection on the unique moment of joy that we experienced in Lovers Rock and the feeble ecosystem in which the Black community developed themselves. How many lives have been profoundly wrecked by systemic racism in the United Kingdom? This question is ever present in this anthology.

During his time in jail, Alex’s perspective on life has a new and definitive transformation through the interactions with his prison mate, Simeon (Robbie Gee offering an intoxicating performance), who feels passionate about music, books, and education. This man is the final piece in the puzzle that will drive Alex into a conscious exploration of his past in order to define what he wants to be in his future.

As in previous efforts, Steve McQueen presents a memorable film through its technical achievements. The costume and production design, by Jacqueline Durran and Helen Scott, respectively, transport us back to the 70s and 80s. The music that played an iconic role in both Lovers Rock and Red, White and Blue is equally essential in this movie, highlighting the importance it had in Alex’s formative years.

The script – written in collaboration with Alastair Siddons – is intimate and small-scaled. We explore a brief and vital moment in the life of a man that would become a great figure in British contemporary history. As with Red, Blue and White, we follow a man that is constantly judged by a system designed to bring him down. Instead of providing us with an optimistic story focused on success, McQueen and Siddons present the struggle that came before that.

With Alex Wheatle, Steve McQueen continues to prove that his Small Axe anthology is ground-breaking. Through the exploration of this real-life figure, McQueen provides an intimate story of self-discovery within a context that is overwhelmingly shaped by corrupt institutions. Less showy, but more intimate and empathetic than other entries, Alex Wheatle presents inspired reflections about the path we want to follow, notwithstanding our past or context.