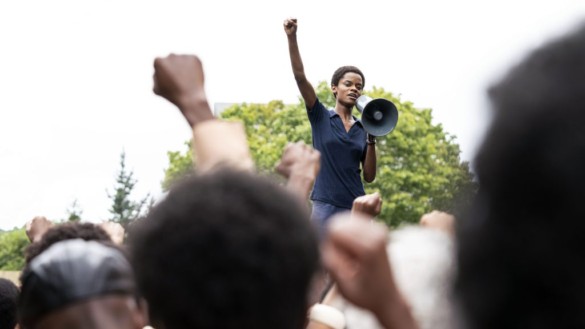 Synopsis: Part of Steve McQueen’s “Small Axe,” an anthology of decades-spanning films that presents various lives in London’s West Indian community. Mangrove tells the true story of Frank Crichlow and eight other men and women that were wrongly arrested and charged with incitement to riot and affray during a peaceful protest in 1970.

Mangrove, the second film of Steve McQueen’s anthology Small Axe, takes an entirely different path from the one we previously saw in Lovers Rock. While the latter is a celebration of Black joy and love, the former works as a cold and realistic reminder of the unfair treatment Black people experience throughout their lives. As such, McQueen triumphs in the realistic portrayal of the layered existence of a Black person in the United Kingdom.

Specifically, with Mangrove, although it takes place in Notting Hill, England, during the 60s and 70s, the struggles and injustices that are presented are still very much current, whether the country is the United Kingdom or the United States, for example. This movie works as a reminder of how little things have changed in this 50-year span, with the ongoing case of Breonna Taylor as a glaring example.

Through dark and grim tones, Frank Crichlow (Shaun Parkes) is introduced. He just opened a West Indian restaurant in Notting Hill that soon becomes the go-to place for artists, intellectuals, activists, and neighbors. Mangrove quickly becomes an essential feature in the local community. Consequently, Frank and his restaurant become the target of constant raids from the local police with Pc Frank Pulley (Sam Spruell) as the main perpetrator.

The movie invests a long time in Frank’s transition from entrepreneur, to a local leader, to activist. He is quickly joined by Altheia Jones-LeCointe (Letitia Wright), the leader of the British Black Panther Movement, and Darcus Howe (Malachi Kirby), a local activist. Their most influential act of defiance is a peaceful protest in 1970 that ends with the arrest of these three local figures and six others with charges of incitement to riot and affray.

Mangrove can easily be divided in two. The first hour shows the everyday life of the Black people in Notting Hill, where acts of racial profiling, arrests inspired by racial stereotypes, and raids based on racist remarks and abuse of power are part of their everyday existence. The rise of the activist spirit in Frank is slow and hard; a direct consequence of the constant harassment he and his peers go through every day. He is the perfect example of someone who loses his faith in the institutions and learns that self-mobilization is the only choice. Precisely this evolution can work as a lesson in today’s scenario and the impartiality of some people regarding social injustice.

In this part of the movie, McQueen brings to life the anger and horror amongst the Black community while also providing a crude insight into the motivations of the white policemen that constantly harass our protagonists through casual chats and games. His camera does not shy away from the violence and its consequences (there is a scene that lingers too long on a pot after a raid that is not easy to forget), providing reasons to increase the frustration and outrage among the audience.

The second hour transfers these injustices into a courtroom, where these nine people publicly fight for their lives and the achievement of a shadow of justice. This part of the movie is where the uplifting and inspiring acts take place through a spirit of solidarity and defiance against the biased judge, the brutal security guards, and the lying witnesses.

Also, this scenario is presented through an invigorating light. McQueen and his co-writer, Alastair Siddons, make sure that the story shows Black people in control of their destiny. Even the only prominent positive white character, Jack Lowden’s lawyer Ian MacDonald, is given little time in front of the camera and is not presented as a white saviour. In this movie, the Black people command and control their story.

Here is also where the stars of the movie show off their acting skills. The whole cast is extraordinary, of course, transforming themselves through their emphasized Caribbean accents and discreet costumes. Sam Spruell provides a cathartic moment at the end of the film that is impossible not to react to, while Rochenda Sandall is fierce and defiant the whole movie. However, Letitia Wright and Malachi Kirby are the standouts of a very impressive cast.

Wright brings everything to her scenes and works as a dramatic revelation through her passionate and resolute interpretation. Through a speech that exposes the burden of history and solidarity, she becomes the soul of the movie. Also, Malachi Kirby offers a trailblazing character who elegantly ridicules the policemen that constantly humiliated them.

Mangrove also invites to question the justice system and those in charge of carrying out the laws. How can you find justice in a scenario where those in charge of applying the law are racist and biased? Alas, the movie presents the uphill battle this group of people must go through, putting all their faith in the system that has continuously failed them and in the jury, formed by people that have never gone through their racial experience.

The film presents satisfying instances of dialogue and exposition, although these little victories are not common. However, their willingness to risk their lives for the well-being of future generations is latent and inspiring. Although the movie presents an uplifting resolution, it quickly reminds us that, in real life, the battle did not end. It was instead a short victory.

Mangrove presents a resounding contrast in the evolution of London through scenes that show its modernization while the racism and hostility against Black people remained the same. While it shows the resilience of Black people through a sense of solidarity among them, it also reflects the injustices they continue to deal with daily.