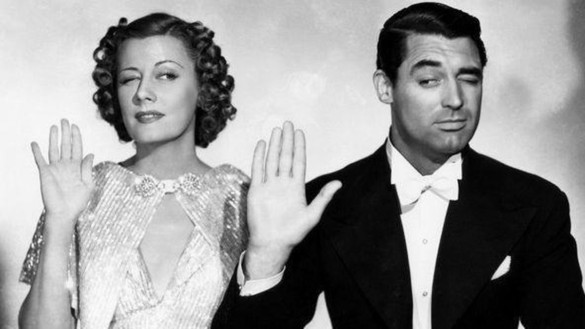 Ok, we are back for another month of Criterion Crunch Time, so it is time to guide you through four movies that are sadly leaving the Criterion Channel at the end of December. One rewarding thing about the selection on the channel is that there is an opportunity to find genres that either have fallen out of fashion or just aren’t done well anymore. In that vein, what about the screwball comedy? These films, which both satirize traditional romance, specifically by challenging masculinity, and have elements of film noir, make for interesting criticism. In many ways, this genre just doesn’t fly today. Possibly because we demand a more focused realism, especially within the genre for romance. But again, this is the joy of watching older movies. It gives us a look inward to film, as the form itself was being built and rebuilt throughout history.

One important screwball comedy, though it can even be folded under the smaller subgenre of screwball comedies about remarriage, is The Awful Truth. This film, although a cherished classic, was apparently marred by all sort of backstage shenanigans. This article will focus much more on the actual movie, but basically, the whole thing was unscripted and led to both lead actors having breakdowns and/or asking to leave the set forever. But thank goodness they didn’t because The Awful Truth is an absolute treat.

Jerry (Cary Grant) and Lucy Warriner (Irene Dunne) are married, at least for the first ten minutes. Jealousy and assumptions drive them apart, but it is possible that they still have quite strong feelings for one another. Luckily, divorces are not final immediately, and that time limit gives the film a specific endpoint, whether for tragedy or comedy. The Awful Truth is a wonderful litmus test for your appreciation of Cary Grant. There are few actors in film history who have a grasp of both the comedic and the dramatic like him. In terms of this and success in both genres, George Clooney might be the closest comparison. Much like Clooney in his comedic Coen Brothers roles, Grant is absolutely ready and game to make a complete fool of himself here. And yet, there is a sense that he is a good man underneath and we should be rooting for him.

Irene Dunne is able to match Grant and even outpace him from time to time. The script, such as it is, penned by Viña Delmar, allows Lucy to feel mostly in control, even when she has the realization that she still loves and wants to be with Jerry. Many don’t think of the arcs of characters in romantic comedies, possibly because of genre trappings and expectations, but Lucy in her initial scene is wildly different from she of the romantic happy ending. The opening scene of mutual suspicion shows her as smart and capable, but also quite proud. Yes, she catches Jerry in a lie, specifically by finding a stamp on an orange that denotes it is from California and not from Florida as he claims. But his suspicion of her and her music teacher, Armand DuValle (Alexander D’Arcy), leads to her leaving a relatively happy marriage, no further questions asked.

As with all of the best romances, there are many mistakes and close calls before they separate yet again. Cary Grant, again, provides a gift as a suave, debonair man of culture who is absolutely sure of himself.  Until he’s not.  And then he is made the fool all over again. First, he should have told his wife he wanted some alone time instead of sporting a fake tan to convince her of his Florida trip. But later, his own suspicions of her are proved false. And yet, he muffs this, as well. He knows that she was never disloyal, but he is unable to stop his own toxicity from stopping him from being happy for her or letting her live her life. Instead, his fight with well-meaning, sweet idiot Dan (Ralph Bellamy) leaves both Jerry and Lucy alone.

It is worth noting that the conclusion of the film, and admitting the awful truth that they actually still love one another, essentially breaks down both characters and removes any pride and status that they have. It is made clear early in the film that they are both members of society and never want to admit their faults. Additionally, after their second split, Jerry begins dating an heiress, an obvious symbol of that high society. And how does Lucy break up this union? Not by being prideful and reminding him of what they have lost, but instead by pretending to be his sister and performing a dance that she knows will embarrass him, and more importantly her. This is in reference to a woman that Jerry was dating previously, and they both mocked. If nothing else, this choice and connection proves how well they know one another. No one, not even an heiress, can possibly match Jerry and keep him on his toes like

Among the many things to love about The Awful Truth is that it never takes it easy on the protagonists. Many romances are simply aching to get their lovers together, for good reason, but because of this, they take shortcuts to make the audience happy. In this film, even after the embarrassment, there are extended scenes of the two of them trapped in a cabin together. When they finally reconcile, just before the deadline, there is a palpable sense of relief, rather than passion. The two are meant to be, despite their faults. And for all of its screwball antics, this might make The Awful Truth much more realistic than many other romances before or since.

Come back next week for Sleep Walk from director Sara Driver!