Movie Review: Don Cheadle is Miles Ahead of the filmmaking game 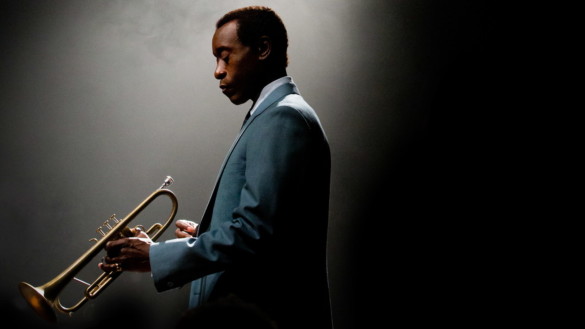 Synopsis: An exploration of the life and music of Miles Davis.

Miles Davis was one of the most important and innovative jazz musicians of his time, and arguably of all time. Like the best jazz music, Davis was someone that never played by the rules; his music varied from post-bop, modal jazz, fusion, funk, or whatever was stylistically progressive at the time. Whatever it was, Miles Davis was there innovating, and as a result he creating some of the most interesting music from the ‘50s into the late ‘70s, music that never obeyed the rules of musical conformity. Don Cheadle does the exact same thing with Miles Ahead, a fragmented and experimental biopic that refuses to obey the laws of narrative. And why would it?  Simple, because it shouldn’t. As a result, Miles Ahead is the most interesting and unique biopic in years, and certainly not for everyone. But for both Davis and jazz lovers (such as myself), this film is nirvana.

Directed, co-written and starring Don Cheadle, Miles Ahead never tells the audience about Miles Davis, but instead shows; it allows us to experience and feel the man he was. It intelligently chooses to focus on Davis as he was in the late ‘70’s, a time when he was no longer putting out great music, and was a deeply broken man. He is approached by news reporter Dave Brill (Ewan McGregor) who is tasked with writing his comeback story, a comeback being forced upon Davis by the execs at Columbia Records, most notably that of Harper Hamilton (Michael Stuhlbarg).  This period is juxtaposed by flashbacks of Miles Davis in his prime, in the late ‘50s into the mid ‘60s (a period of classic albums such as Kind of Blue and Sketches of Spain), and his romance with Frances Taylor (a brilliant Emayatzy Corinealdi). This shows us the two sides of who Davis was, where he started and what he had become, and yet the reasons why he becomes such broken man we see is irrelevant; what matters is how you interpret it, like you would a great jazz piece or any piece of fine art, and Cheadle’s decision to explain very little adds to the film’s charm.

What continues to add to the film’s charm is its narrative structure, its frantic and improvisational editing style, creating a very fragmented and jarring experience. It is here that Miles Ahead may lose many of its film goers, yet it is also here where I felt won over. Don Cheadle has said he wanted Miles Ahead to feel less like a biopic and more like a companion piece to Miles Davis’s music; jazz music is all about improvisation (just listen to the structure of Davis’s classic fusion albums, such as the extravagant Bitches Brew), which in turn allows Cheadle’s filmmaking to act as symbolism for the film overall. It represents Miles Davis and his desire for free artistic expression, something he admires but is not always reciprocated by his listeners, creating yet another juxtaposition in the varying viewpoints of jazz music.

The use of flashbacks, frenetic direction, and improvisational symbolism, all this makes for a film that is thematically about juxtaposition, the jarring and distinctive differences at two points in one’s life. What causes that? It could be many things, and Miles Ahead demonstrates many interpretations. It shows how artists change and progress over time, a progression depicted in their art, but how their audience isn’t always well versed in that change. Constantly Miles talks with his avid listeners who state how much they love his old material, creating a negative perception from Miles himself that listeners don’t have the time or patience for his artistic progression. This arguably ties to a moment in the film’s climax, where Miles indirectly states why he does not want to do a comeback, and it is surprisingly heartbreaking.

None of this drama wouldn’t work if it wasn’t for Don Cheadle’s career-best performance, already in the running for my pick for best acting performance of 2016 (even though we still have a ways to go). If I have any complaints with the film, it revolves around some of the supporting cast; great actors like Ewan McGregor and Michael Stuhlbarg just aren’t given enough to do, but much of that can be forgiven as this is a film about Miles and only Miles.  Despite this, Miles and Dave Brill do share pivotal moments together that ultimately shape both men, such as a great “boxing” scene in Miles’s basement. That’s the other thing that satisfies the Miles Davis fanboy in me, and that’s the fan service to his music; the boxing (a reflection of not just his love for boxing, but his soundtrack album A Tribute to Jack Johnson), the album covers of Someday My Prince Will Come and Miles in the Sky, the basement performance of the great tune “Nefertiti”, portrayals of great musicians such as Gil Evans and Herbie Handcock. All this shows Don Cheadle as not just a fan himself, but one who also wants to pay appropriate homage and respect to this great artist.

The film’s title (taken after his classic 1957 album) is more than appropriate, showing a man who was constantly ahead of the game. In the end, despite your perception of the artist and his art, the legacy lives on, and his influence will continue to do just that, influence. Like the best jazz music, this film will be a divider, creating its own juxtaposition in its viewers. But isn’t that the point of great art? Like the title of his most notable tune, I just have to say, “So What?” So what if you didn’t care for it, Miles Ahead still ranks as one of my favorite films of the year so far.