Movie Review: X-Men: Apocalypse fails but does so pursuing character 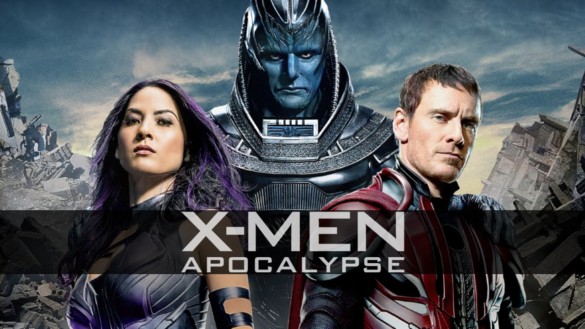 Synopsis: With the emergence of the world’s first mutant, Apocalypse, the X-Men must unite to defeat his extinction level plan.

DIRECTION
Bryan Singer may not be the most dynamic director working today but after watching X-Men: Apocalypse, one thing is clear to me; he knows X-Men. The first two X-Men films arguably set the table for the superhero buffet we get to eat from every single year, and for good reason. In fact, in some circles, X2 is one of the best superhero films we’ve seen to date. After taking a hiatus from the series after X2, he returned in 2014 to direct X-Men: Days of Future Past, which I personally think is the best film in the X-Men Universe so far. And now here we are with X-Men: Apocalypse, the ninth film in the X-Men series, also directed by Singer. Apocalypse is arguably the worst X-Men film he’s directed but the X-Men comradery is there and the poignant individual character moments that make the X-Men who they are resonate by the end. Singer knows the characters and it’s apparent here. The problem with the film is that Singer is out of balance exploring all of the X-Men characters as well as trying to give us a grander story revolving around the Apocalypse character. Singer can’t figure out the right mixture and because of that, the end result is quite messy. However, it’s an ambitious mess that spends a lot of time with the heroes, their emotions and what drives them in the middle of the conflict. Singer may be presumptuous and lacking precision, which ultimately does hurt the film, but the character pathos is handled well and it’s what Singer uses to overcome the narrative hurdle.

SCRIPT / THEMES
Apocalypse (Oscar Isaac) is the world’s first mutant, and after an event causes forces him out of a 2000-year-old slumber, he awakens to find the world in a disastrous state. He then sets out to find his Four Horseman so he can once again take over the world and create it the way he thinks it should be. Simultaneously, Magneto (Michael Fassbender) has settled down with a wife and daughter and is trying to live the life that his old friend Xavier (James McAvoy) would want him to. It doesn’t quite go according to plan and eventually Magneto goes back to what is instinctual to him. While all of that is happening, Xavier is continuing to build his school and we see new students, such as Jean Grey (Sophie Turner), Scott Summers (Tye Sheridan) and Kurt Wagner (Kodi Smit-McPhee) adjusting to their life at the school. After Magneto is recruited by Apocalypse to be one of the Four Horseman, it sets in motions a series of events that intertwines all of these characters, which forces them into a fight they may not be ready for.

As mentioned above, the juggling act of this screenplay was a bit too much for Singer to handle as a director. Singer, as well as writer Simon Kinberg, could never find the right balance of character exploration and over-arching narrative exposition for the film to come together in a coherent way. Apocalypse’s arc, if you can call it that, is scattered and lacks narrative reason. There’s a basic understanding of what he wants but it’s trite and eventually irrelevant to the film. Singer and Kinberg are more interested in the heroes, their inner turmoil and their struggle together. They are concerned with how the emotions of all these characters (especially Magneto, Xavier and Mystique) tie back to X-Men: First Class and X-Men: Days of Future Past and how that influences the new characters introduced here. Singer intentionally pauses the film to remind us of that character growth we’ve seen, and not strictly as a call back, but to show us how it plays into the actions of these characters in X-Men: Apocalypse. There is a continual progression that is rooted back to the previous films of this franchise and Singer is not interested in forgetting that progression. It mattered for the characters in those other films and it matters to them right here and now.

That kind of character work really resonates when you see Magneto experience trauma and how it impacts Xavier, whose response is now rooted in hope. A hope he had to learn in Days of Future Past and is now crucial to Apocalypse, narratively and thematically. This through line of hope, as well as overcoming shame and your past, carries a lot of weight and it’s fleshed out well in the heroes of this film. Singer and Kinberg fail in creating a whole experience but the character focus is robust and in the end emotionally satisfying.

PERFORMANCES
The performances of the film are also key to Apocalypse overcoming it’s flaws. James McAVoy and Michael Fassbender give their all here and they make their characters’ emotional journey come alive on screen. Jennifer Lawrence doesn’t have as much to do here compared to First Class and Days of Future Past but she is still more than serviceable. She brings it when necessary. Tye Sheridan and Sophie Turner are stand outs among the new cast. They perfectly set the foundation for who their respective characters and arguably do it better than their predecessors in the first X-Men film. Kodi-Smit McPhee is also very good hiding behind Nighcrawler’s accent and aesthetics, he’s pretty unrecognizable. Evan Peters is worth noting as well and if you enjoyed the “Quicksilver Scene” in Days of Future Past, buckle your seat belts once again. Oscar Isaac is fine in the Apocalypse role, despite being under utilized. Isaac is a great actor and he still manages to give Apocalypse a presence even though it is extraneous in the end.

SCORE / SOUNDTRACK
This never gets talked about enough with the X-Men franchise, which has consistently featured some of the best scores in the superhero genre. John Ottman, who wonderfully scored Days of Future Past, is back again for Apocalypse and he does not disappoint. Sure, it would have been great if Ottman kept Henry Jackman’s Magneto theme from First Class but where Ottman loses opportunity, he gains with adding a strong emotional undercurrent to these films. Ottman’s score beautifully reflects Singers emotional approach to this film and it does make for some hefty scenes throughout.

FINAL THOUGHTS
X-Men: Apocalypse is a disjointed film and it does fail to balance it’s different objectives, ultamately suffocating the over-arching narrative, but it does so trying to pursue character. A lot of blockbuster’s (looking at you Transformers and Ninja Turtles) don’t even attempt chasing character and as a result they become mindless experiences that may or may not be fun. Bryan Singer, however, does care about character and poignantly gives it to us knowing that the film may suffer for it. Personally, I’ll take that kind of ambition any day of the week.