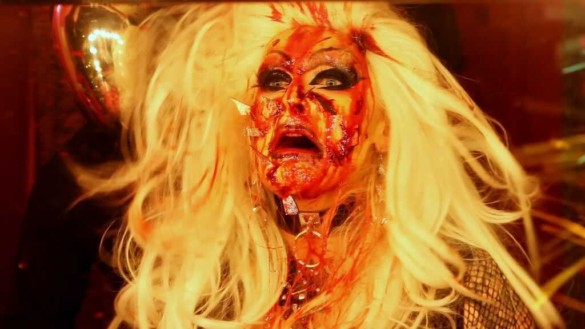 Synopsis: As a masked slasher is killing gay men and draining their bodies of all their blood, a down-on-his-luck bartender and an over-the-hill drag queen struggle to find their way.

“I douched for this!” blurts out co-star, co-screenwriter, and co-director Christopher Dalpe’s Brian when a masc4masc top derides Brian for being too fem and walks away from him at 3:00 in the morning at a Providence, Rhode Island gay club called The Out House. Hookup and dating apps like Grindr, Tinder, and OkCupid are chock full of straight-passing gay men who refuse to associate with—let alone bed—anyone remotely feminine or androgynous. Many will say they just have a “type” without an ounce of self-reflection as to why they’re only into other virile men. The inherent misogyny and internalized homophobia of the masc4masc “preference” is one of the many problematic facets of gay culture that Death Drop Gorgeous seeks to dissect over the course of its crude and grotesque 104-minute runtime.

In addition to ridiculing Brian’s demeanor, the chauvinist tells Dwayne (Wayne Gonsalves) that he isn’t interested in “blacks.” Out loud. I was genuinely taken aback when that line was delivered only because I’m not accustomed to hearing that “preference” actually spoken aloud, even though I’m well aware that it’s a very real thing. There was a time when phrases like “no fats” or “no fems” or “no blacks” were disturbingly common in app profiles, especially if the avi was a headless torso. Yet again, this is a “type” held by folks who could use a little psycho-analysis, but for a lot of them it’s too late. The damage is done. And like any good slasher film, Death Drop Gorgeous does not let bad behavior go unpunished. So, for being a prejudiced jerk and for committing the cardinal sin of wearing an inseam that’s at least three inches too long, it’s no surprise that this bloke gets a proper comeuppance.

The kills are a riot. A screwdriver, an electric carving knife, and an old fashioned meat-grinder are just a few of the weapons of choice that contribute to these grisly deaths. The lurid gore is super fun and possesses a particularly DIY charm, and coming from me that is not shade. Whereas the snobbish may write-off such unrefined special effects as amateurish or distasteful, I view them as spunky. All the loose entrails and oozing viscera, like the film as a whole, are a rejection of conventional polish. So, too, is the filmmaking. Could the overall product have benefited from enhanced color grading? Maybe. More dynamic framing? Conceivably. Smoother staging of the shots? Perhaps. But at what cost? Death Drop Gorgeous is what indie spirit is all about. It would rather say something while looking rough around the edges than not say anything at all. And raise some hell along the way.

The ingenuity and the presentation of the killer harken back to the Italian giallo pictures of the 1970’s. Early on we’re shown black leather-gloved hands (a tell-tale giallo staple) and later, a metallic mask.  If you think about it, slasher killers are, by design, in drag when they’re doing their business, so it only makes sense to set such a film in and around a drag bar. The two main queens are the seasoned diva Gloria Hole and the egotistical rising star Janet Fitness, played by Michael McAdam and Matthew Pidge, respectively. I love that in the world of this story, drag queens do not exist out of drag. As a fan of the art form, it’s amusing to watch of course, but it works to also maintain an emphasis on their appearance. Ageism and vanity are also key components to this narrative. It’s through the queens’ behavior and cutting lines toward each other that the movie explores the fear of aging and the alienation that comes with it—another giallo characteristic.

Also, like most gialli, this is a mystery; the murderer is not an anonymous adversary but rather an established character with a secret motive. And thankfully, we’ve got some handsome investigators on the case. The buddy cop canon is rife with homoerotic clue-gatherers, and Detectives O’Hara and Barry are welcome additions. Played by Michael J. Ahern and Sean Murphy, these guys definitely lean into the trope, and they’re appropriately upfront about it. When we first meet Barry, he’s biting into a big gooey eclair, then papa bear O’Hara wipes the excess filling from his partner’s face with a thumb and tastes the sweet custard himself. Not exactly subtle, and it only gets more overt from there. O’Hara and Barry may have the more suggestible material, but it’s Brandon Perras’ smarmy Tony Two Fingers who proves to be the most histrionic performance. Those on the internet who do not believe in the existence of male camp need search no further. Perras’ portrayal is so unabashedly parodic as the sleazy nightclub owner that it makes up for the lousy belly padding under his shirt.

Death Drop Gorgeous owns its messiness. There’s almost no point in mocking its wonkiness because it’s already in on the joke. Any technical note that could be dished out, the filmmakers are already aware of—they lived it. They made a feature-length movie for very little money (shout out to all the donors listed in the credits) on their terms and managed to create a boisterous ride. A bigger budget and a more experienced crew could have “improved” the production, sure, but I frankly don’t care. You can see the passion being poured into every scene. At least, I can. And to top it all off, they spoke their truth. This team called out the prejudices, hypocrisies, and double-standards that are rampant within the LGBT community while simultaneously producing a gory and glitzy horror-comedy that is first and foremost highly enjoyable. I’m not saying it’s a perfect movie, but even naysayers have to admit it’s an accomplishment. The film trips over its own hem from time to time, but I was never not entertained, and that has to count for something.