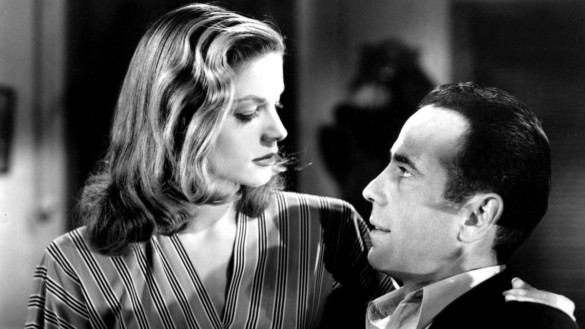 This is the big one for Bogie and Bacall fans. Yes, The Big Sleep (1946) enjoys a better critical reputation, but this film gave us the moment when Lauren Bacall states, “You know how to whistle, don’t you Steve? You just put your lips together and blow.” This line, and Bacall’s striking facial features, turned her into an iconic screen beauty who was emblematic of the toughness that 1940s audience desired out of their women. Her first film became something that she could never quite top, and the bloom came off the rose fairly quickly. When people think of Bacall, they imagine the sultry nineteen-year-old seducing a craggy, hardened older man who seems to admire her sense of humor and youthful vitality. In the minds of the public, Bacall and her character, Slim Browning, became one and the same. She’ll always be Browning in the eyes of film fans, so I was surprised to find that To Have and Have Not (1944) isn’t really about her character.

When you read about the production of the film, it begins to make more sense that you have to sit through about half an hour of Bogart dithering around before Bacall shows up and subsequently becomes the center of attention. You learn that the film’s director, Howard Hawks, quickly picked up on the fact that there was electric chemistry between the married Bogart and his young, inexperienced co-star, so the existing screenplay was re-written to mostly focus on the relationship between their characters. This is why the plot structure feels so odd, as, by the end of the film, everybody has completely lost interest in the supposed conflict at hand.

It was conceived as a rip-off of Bogart’s recent hit, Casablanca (1942), and a lot of the same plot points are present. Bogart plays Harry Morgan, a grizzled, emotionally guarded boat captain in Vichy France, who is determined to avoid getting into a serious relationship with a woman or any real involvement with French Resistance fighters. He aims to remain neutral and wait out the war years without aligning himself with either side of the conflict. He is eventually drawn into the conflict when he is forced to help members of the French Resistance travel to Devil’s Island. He rediscovers his humanity and takes the side of the Resistance fighters, whilst also opening his heart to the prospect of love when he begins to spend more time with Browning. Ultimately, he gets the girl and ends up on the right side of history when it comes to the political positions that he takes.

It really feels like everybody was on cruise control as they made this. The screenwriters took the basic framework of Casablanca, played mad libs with it, and then decided to let Bogart keep the girl at the end. There is a laziness to the fairly unnecessary subplot that takes up the first twenty minutes, that I simply could not abide by. When you have names as legendary as Bogart and Hawks, you expect something dynamic and tightly woven. Hawks was renowned for his ability to get to the point and express his ideas with a startling clarity of vision, so why did he have to lose his knack when it came to this project? He took his foot off the gas and it severely hurts a film that should be a blend between a sexy erotic drama and a tense, exhilarating thriller. Everybody is so lethargic that nothing ever quite kicks into gear.

It ends up being most notable for Bacall’s presence, which was to be expected, but even she was rather disappointing. I have come to realize that there are several stars who are more arresting as models than screen presences. I can draw more out of a promotional shot of Bacall than I can get out of her appearances in films. When she shows up on the screen, she still has that incredible face, and yet she’s always a little stiff and withholds too much from the camera. That veneer of imperious hauteur turned her into a sex symbol, but when that facade wobbles, and we notice that she appears deeply uncomfortable in her role, she loses our interest. Unlike Rita Hayworth, another screen goddess, she never fully dazzled me, and when she displays a touch of fragility, the move feels too calculated to mean anything. There was a streak of mania that ran through Hayworth’s performances, and that made her enigmatic and compelling, even when the camera was leering at her breasts. Bacall has a couple of tricks and seems completely unwilling to draw on anything that might seem too raw or immediate for audience members who want to see her as a fantasy girl. Unfortunately, she becomes less intriguing because of her limitations as an actress and her aversion to risk taking. I don’t need every movie star to be a brilliant actor, but I expect them to be less awkward than Bacall.

I criticize her performance so heavily because she is the real selling point of a film that is low-rent Casablanca on almost every other level. Bogart and Hawks, the veterans with a lot of pedigree, deserve an even larger share of the blame, as they didn’t pull their weight in a situation where they had all sorts of resources handed to them. With a better foundation to work with, Bacall might have seemed like more of a commanding screen idol.

As it is, I would suggest that people look at binders of artfully lit photographs of Bacall. She manages to radiate that enigmatic quality that she fails to capture in her films. You want to know more about the smirking teenager who gazes up at you through her eyelashes when she’s looking out at you in still image form. That’s the real Bacall experience, and it’s disappointing to see that she’s not all that she’s cracked up to be when it comes to her most famous film performance.

This presumably made the list because Bogie and Bacall are some of the most iconic couples of Old Hollywood. It doesn’t matter that we care more about them as mythical characters built up by tabloid stories; they did make a couple of films together. To leave them off of a list of iconic romances would seem like a criminal offense. They are here because they are legendary celebrities. Their place on the list has very little to do with any critical evaluation of the film at hand.