Movie Review: “Yakuza Princess” is a Robust Action/Thriller with no Substance 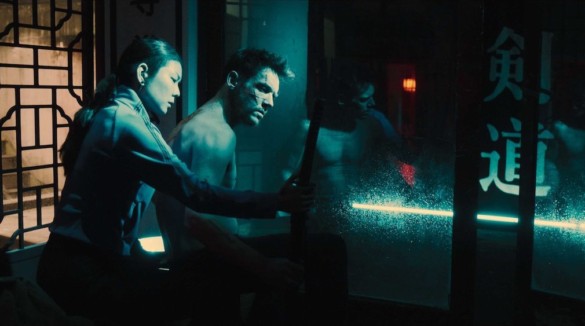 Synopsis: The heiress to half of the Yakuza crime syndicate forges an uneasy alliance with an amnesiac stranger who believes an ancient sword binds their two fates. She must unleash war against the other half of the syndicate who wants her dead.

Here’s something you might not have known: the largest Japanese diaspora in the world is found not in America, or even neighboring countries such as China or the Philippines, but in fact in Brazil. Specifically in the São Paulo region. It’s an interesting factoid and one which made Danilo Beyruth’s graphic novel Samurai Shiro so fascinating. Indeed a title at the beginning of Vicente Amorim’s big screen adaptation Yakuza Princess informs us of this fact, hinting at the salivating prospect of a cultural crossover between the two.

Unfortunately, this promise is ultimately unfulfilled. Any opportunity this movie might have had to stand out among its peers with a genuine, authentic insight into a cultural phenomenon that remains largely unexamined is wasted by homogenous filmmaking which ensures Yakuza Princess could have been filmed anywhere, making no difference to the story or even the cinematography. What we have instead is a generic action/thriller mired by clunky dialogue, an over-reliance on style, and an ineffectual performance by its lead star.

Akemi (played by Japanese singer/songwriter Masumi) is the survivor of a Yakuza turf war which saw the deaths of her parents. Spirited away to Brazil, she yearns to know more of her grandfather – to the extent she gets a tattoo of a symbol he left her with on her forearm. At night she drinks in karaoke bars and beats to a bloody pulp the men stupid enough to antagonize her.

Meanwhile, Shiro (Jonathan Rhys Meyers, turning into something of a journeyman actor these days) wakes up in a hospital, his face a jigsaw of scars. He has no memory of who he is or how he got there. His only clue is the sword in his possession, designed by legendary Japanese swordsmith Muramasa. Shiro departs the hospital leaving a trail of bodies in his wake and goes off in search of answers.

Akemi and Shiro eventually cross paths, as the sword in Shiro’s possession comes to provide the answer for both of them. They must then contend with a legion of Yakuza intent on killing Akemi who is the rightful heir to the Yakuza throne. What follows thereafter is much battle and gory bloodshed as the two cut down entire lineages on their quest for the truth.

If this all sounds very exciting and watchable, prepare to be disappointed. Kill Bill, this is not. Instead, Amorim and cinematographer Gustavo Hadba go for a style that might be best described as Tarantino-lite. Lots of neon colors – mostly variations of blue – wash the screen, intensely framed close-ups are in abundance, one tracking shot looks like it aspires to the Copacabana scene from Goodfellas. It certainly goes heavy for style, and for its money it works, yet no movie with a title like Yakuza Princess and featuring a legendary sword which is said to house a demon and drink the blood of its foes should ever be this, well, boring. Whole swathes of time pass with Akemi meandering aimlessly as she looks for answers. It slows what little story there is to a snail’s pace, and by the time the brutal, gonzo violence unfolds we’re left just waiting for it to finish. At a frankly numbing runtime of 111 minutes, Yakuza Princess is far too long for such a slight story.

It also doesn’t help that Masumi is not a capable enough actor to convince you to invest in Akemi’s emotional journey. In fact, as each piece falls into place and Akemi learns more of her fabled grandfather and his dark past, nothing seems to change in her manner at all. There is very little in the way of an emotional arc for the character, and thus it’s hard to care about what happens to her. Consideration should be given to the fact this is her first feature and so she is largely untested in this arena, but it can’t be ignored that the only saving grace Yakuza Princess might have had – a compelling lead character who you want to see succeed – is rested on the shoulders of an inexperienced actor who can’t carry it.

Rhys Meyers is a little better, although he gets far less to work with. Shiro is practically mute throughout, instead glaring intensely in every scene as he is rendered little more than plot foil for Akemi. There was a time Rhys Meyers was considered the up-and-comer, heir to the British heartthrob throne (though he is Irish). His turn in Woody Allen’s Match Point garnered critical buzz and won him a Chopard Trophy at Cannes. His career since has been twisting and turning, never going in the direction you might expect. It’s admirable and one has to commend him for it, although you find yourself wishing he had chosen a better script than this.

Ultimately, Yakuza Princess never gets going: its adherence to style over substance ensures it never builds momentum, amounting to little more than a series of stylish set-pieces which feel bereft of meaning. Most frustrating is the excellent potential within the material – a Yakuza retirement home where the old-timers lament about the lost age of honor; a culture of displaced Yakuza in the slums of São Paulo; a legendary sword; an amnesiac ronin looking for answers – which is never fully realized. In more capable hands perhaps Yakuza Princess might have been a cult hit, garnering the kind of following enjoyed by the movies it clearly tries to emulate. Yet what we’re left with is a formulaic actioner with bad dialogue – “The katana has found you. You and it are one now, as you are meant to be. Go, now. Your life depends on it” – stilted acting, and more interest in style than storytelling.