Movie Review: A Bigger Splash feels less like a big splash and more like a small ripple 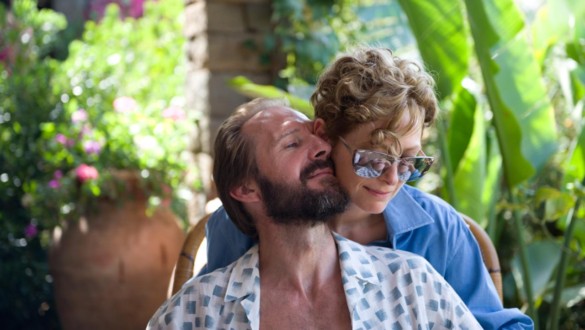 Synopsis: The vacation of a famous rock star and a filmmaker is disrupted by the unexpected visit of an old friend and his daughter.

Jealously fueled by eroticism and sexual history, within the rock n’ roll lifestyle. A Bigger Splash introduces these interesting notions with vibrancy, exuberance, and (of course) eroticism, all backed by some fantastic performances.  It also, appropriately but unfortunately, blows its load too soon and runs out of said things to say by the midway point, and simply coasts along instead of progressing. I should also preface by saying that I had not seen I Am Love prior to seeing A Bigger Splash, so this was my first experience with director Luca Guadagnino. Perhaps I was a bit unprepared.

A Bigger Splash depicts a high profile couple on vacation in Pantelleria; famous rock star Marianne Lane (Tilda Swinton, nearly channeling her inner David Bowie) and photographer Paul (Matthias Schoenaerts). Their vacation is interrupted by an unexpected visit by their old friend Harry (Ralph Fiennes), accompanied by his daughter (Dakota Johnson). Harry is a friend of Paul’s and an old flame of Marianne’s, and unfortunately his sexual urges for her may still remain.

It is here that fuels the sexual yet jealous fire of the film’s primary themes, stated above.  Harry is essentially an uninvited guest, whose baggage is packed with an unwanted tension during Paul and Marianne’s desire for a peaceful vacation. I feel Harry is someone many of us can relate to; we all have that friend that likes to “wheel” his or her way into our private getaways, uninvited mind you, and whether that is fueled by sexual history or anything else depends entirely on you relationship with that friend. In the case of Harry, his history with Marianne and braggadocio-like manner as a rock n’ roll producer (Fiennes has a great dance scene to the Rolling Stones’ tune “Emotional Rescue”), that fuels Paul’s own jealousy. As a result, an erotic journey of lust ensues between our four leads.

All these interesting notions are fully explored in the film’s effective first third, and then ceases to progress. It repeats itself too often, and thus continues to become less engaging as it aimlessly coasts along. It does become clear that the film is moving toward something arduous, and the film’s final act is indeed such, but too much repetition makes way for stale delivery. Keeping with the rock n’ roll aesthetic of the film, imagine your favorite rock album, listening to it all the way through from beginning to end, and that immersion you feel as the final note fades away. Now instead of that, imagine just listening to only one of the songs on that album over and over again; it’s great at first, then slowly you become sick of it. That’s A Bigger Splash in a nutshell.

It cannot be denied that A Bigger Splash is beautifully shot, and the performances by Fiennes and Swinton (who hardly speaks in this film) are indeed fantastic. Even Matthias Schoenaerts, who was great in last year’s The Danish Girl, has a few moments to shine here (too bad Dakota Johnson becomes too lost in the shuffle, a slight insult to her own talents). But I can’t help but feel that Guadagnino never explores the film’s erotic notions or rock n’ roll tendencies to its potential, and that makes for a disengaging experience. Perhaps I just didn’t “get” it all, but as it stands, it’s less of a big splash and more of a small ripple.