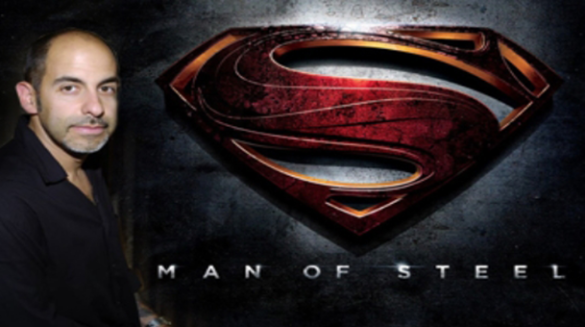 With Man of Steel coming out this weekend, lots of people are wondering what the possibilities will be going forward with Superman and his possible friends. Well in an interview with HeyUGuys, Man of Steel writer, David Goyer, offered some insight into Batman in this new universe.

“Zack [Snyder] has said that Bruce Wayne exists in this universe. It would be a different Bruce Wayne from Chris’ [Nolan] Dark Knight trilogy, and it would be disingenuous to say that Zack and I haven’t had various conversations on set, around ‘what if’ and ‘moving forward’”.

With Warner Bros. already working on a sequel to Man of Steel, it’s not far fetched to think we may see Batman or some other DC hero join in on the fun.

In another interview with DenOfGeek, Goyer discussed what Lex Luther’s involvement’s would be in a MOS sequel.

“Previous depictions of Lex Luthor on film depict him as a bit bumbling. Even though Gene Hackman’s depiction was fun, we’ve indicated with Lexcorps that you can infer that Lex in this world is more a Bill Gates or Rupert Murdoch like character. He’s probably a multi, multi billionaire. He’s not a crook.”

Let’s be realistic here, Man of Steel is going to get a sequel. Regardless of the mixed reviews, the marketing did a superb job and it will get people into the theaters. This movie will make a lot of money and as we’ve mentioned, Warner Bros. is already working on it. To them, they are most likely looking at this as the start of their big DC project which could lead to Justice League, if done right.

Look for Nate’s full review of Man of Steel which will be coming shortly. In the meantime, if you’ve seen the film, let us know your thoughts on Man of Steel in the comments below.