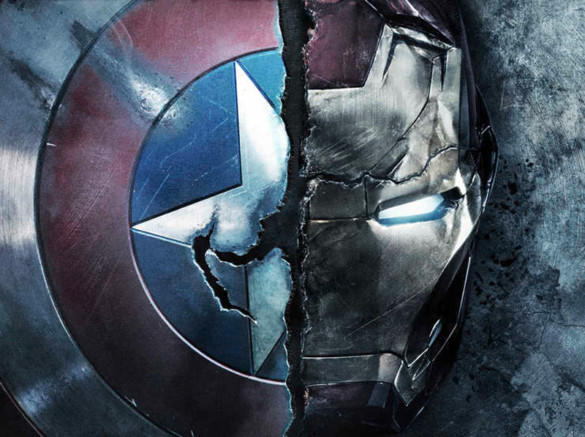 Holy Captain America, it’s Civil War week! You’ll have to forgive my geeking out, I couldn’t be more excited for Civil War this weekend. I understand that this genre and perhaps Marvel in particular isn’t for everyone, but personally, I’ve had an absolute blast with this Universe so far. Ever since Iron Man in 2008, I’ve been hooked and even though the MCU has it’s flaws, it’s never become tiresome for me. The over-arching MCU shoe-in’s have never been a problem for me either. In fact, after seeing Batman vs. Superman and The Amazing Spider-Man 2, the Tony Stark/Avengers set up in Iron Man 2 is quite excellent compared to the world building in those films. I’ve really enjoyed the continuity of the MCU, which is impressive in how Marvel has executed it thus far. There have been a few cast changes but for the most part, in today’s movie-making world, it’s crazy that they’ve been able to keep a lot of the same actors for as long as they have. And in the context of the films, the world building and continuity has mostly worked and added an element of fun that I’ve enjoyed.

Speaking of continuity, the biggest game-changer for the MCU to this point, outside the reveal of aliens invading the Earth, is the events of Captain America: The Winter Soldier. Without going into spoilers, it completely upends who is actually in control of S.H.I.E.L.D. and it takes a major turn with Steve Rogers himself. The execution of that film is damn near flawless and it raises the stakes of the MCU significantly. To date, it’s my favorite film in the MCU outside of The Avengers. And here we are this weekend, with the third Captain America film in Civil War. I haven’t seen the film yet (hence, anticipating post) but everything points to this film doing a similar thing as far as giving the MCU a face-lift. Tony Stark and Steve Rogers have had their differences over the years (in particular both Avengers films) but in Civil War they will face off like never before, causing a huge rift in the superhero community. Not only will the events of Civil War have significant impact on relationships among the Avengers going forward but there’s a good possibility one of them, or more, may die.

And since the stakes of Civil War will be high, it’s also noteworthy to mention that we will see characters that exist in this Universe that haven’t made their on-screen debut yet. Notably, this will be our introduction to Black Panther and the MCU’s version of Spider-Man. Talk about nerdgasm’s. Black Panther looks incredible. I’m a fan of Chadwick Boseman too and I can’t wait to see what he brings to that characters. As for Spider-Man, he’s my all-time favorite comic book character. Yeah, I know it’s kind of cliche but it’s true. I love the character, what he represents and how the root of his actions are tied to his emotions. And as I mentioned above, I’m already a big fan of the MCU and now you’re telling me that my all-time favorite character will be rubbing heads with Tony Stark!? How did this happen? Is this real? It seems to be so and I’m counting the seconds till I can finally see the film.

By now, you’re either smiling along in agreement of my excitement or you’re rolling your eyes at me drooling over this Universe. Hey, I can’t help myself, I love it. The MCU has been a lot of fun for me and I’ve enjoyed watching Kevin Feige’s progression of these characters and this world.

Are you excited for Captain America: Civil War? Let us know your thoughts in the comment section below!