Featured: It took Marvel 30 minutes to give us the best on-screen Spider-Man we’ve had 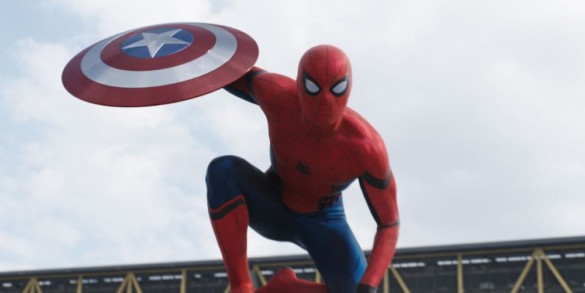 There’s a lot going on in Captain America: Civil War (duh). Anthony Mackie, who plays the Falcon, went so far as to call it “Avengers 2.5” and he’s not wrong. This film sets the tone for Phase Three much like Iron Man and The Winter Soldier set the tones for Phases One and Two, respectively. It introduces Black Panther, brings a narrative that’s been woven since 2008 into fruition and it also marks the on-screen debut of Marvel’s most famous character.

I was about 10-years-old when the first Spider-Man film was released. I was unbelievably excited because Spidey was my character. I related to him, I watched the shows, read the comics and played with the toys. The film doesn’t hold up particularly well (especially when they put that wonky CGI right up in the front of the screen), but as a kid I was blown away. Sure, Peter having webbing shoot out of his body was really weird, but I was captivated. The suit was good, Willem Dafoe was a good Green Goblin and it had one of the best teaser trailers ever – even though it was quickly pulled after the horrific events of September 11, 2001.

The next installment, Spider-Man 2 is the best Spider-Man movie we’ve gotten. But of course pressure from Sony ruined Spider-Man 3, making it a muddied mess of a film. Then we got a reboot. While many think Andrew Garfield was a good Spidey (and I would fall in that camp), the films suffered from strange narratives involving Peter’s parents and fell into the Spider-Man 3 trap of using too many villains. The best part of those films was Garfiled and Emma Stone’s chemistry as Peter and Gwen. It was perfect and completely nailed the dynamics that those two are supposed to share.

Now Spidey is back where he belongs. He’s back home.

Tom Holland, just 19-years-old, is only in Civil War for about 30-ish minutes. He’s better than Maguire and Garfield by a mile. Why? There are a handful of reasons.

In the comics, Peter is bit by the radioactive spider as a 16-year-old high school kid. Despite calling himself Spider-Man, he is very much a teenager. He was a wallflower at school. The target of bullies and a bit of a social outcast. But he was extremely intelligent and had a good heart. All of these elements come out once he puts on the mask. He’s witty and quips at over-matched bad guys as he disposes of them with ease. He finally gets to have a personality – he’s no wallflower anymore.

In Civil War we see glimpses of this. Mild spoilers to follow.

Tony Stark has seen some grainy YouTube videos of Spider-Man. Peter is using a suit that looks pretty similar to the wrestling outfit that’s used in the 2001 Spider-Man film. The footage is pretty cool to see, as it highlights his agility as well as his super-strength (an element that’s typically ignored in the films). So Stark goes to Peter’s apartment in Queens, one that he shares with his Aunt May, in order to recruit him for the upcoming battle with Cap.

There’s instant chemistry between Holland and Downey Jr. Marvel had Holland do separate screen tests with both Downey Jr. and Chris Evans, and it’s not hard to see why Holland got the role. Stark ridicules Peter’s outfit and offers him a 100-point upgrade. Then he tells him he’ll love going to Germany. Peter, visibly shaken, explains that he can’t go to Germany because he “has homework,” adding that he can’t just “skip school.”

These aren’t entirely fleshed out – and at one point I thought we were going to get the Uncle Ben speech. Instead we got Holland delivering a shaky and emotional mini (and awkward… like you’d expect a high school kid to be) monologue about how after his accident things got different. He said he’d “love to play football,” but adds that he couldn’t play before, so he won’t play now. Instead he’s interested in protecting “the little guy.” 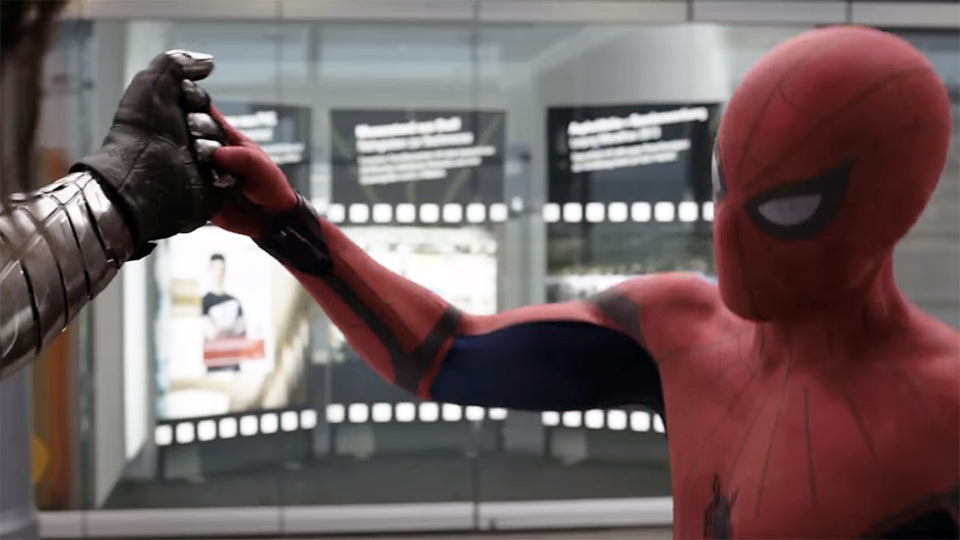 It looks like Uncle Ben’s death will be saved for Spider-Man: Homecoming, likely in a flashback scene, but Holland’s performance had weight to it – he was avoiding bringing it up because it hurts.

Spidey looks like he’s leapt from a comic-book panel and onto the big screen. He’s constantly talking, often to the chagrin of Stark and Co. He’s full of banter, quips and all-around chatter. He webs up Cap’s legs then taunts him about it. He helps defeat Giant Man by webbing his legs up a la the AT-AT’s in The Empire Strikes Back (a film Spidey refers to as that “really old movie”). He webs Falcon and Bucky, then proceeds to talk to them, so much that Falcon says “In fights, there’s usually not this much talking.”

He’s truly funny and his personality really shines throughout the battle. He’s not really “comic-relief,” but he certainly is one of the funniest characters involved. It’s perfect.

Peter makes his own webbing in this. It doesn’t come out of him organically (gross). He doesn’t steal it from Oscorp. He makes it. He also mentions how he “reads and builds computers” for fun. Make no mistake, this Peter is the genius he’s supposed to be.

Even if you haven’t seen the film yet, you’ve seen his debut trailer. The suit is great. It’s a Stark-built suit and the eyes that move aren’t used for emotion (like Deadpool), but it’s because Peter explains to Stark that his “senses are dialed up to 11.” The eyes that narrow help him focus. It also looks great in motion – and the Russo brothers put Spidey in spots to show off his skills. He weaves through cars that Scarlet Witch is throwing, swings off and climbs over Giant Man and does some other awesome Spidey-like flips, swings, contortions, etc.