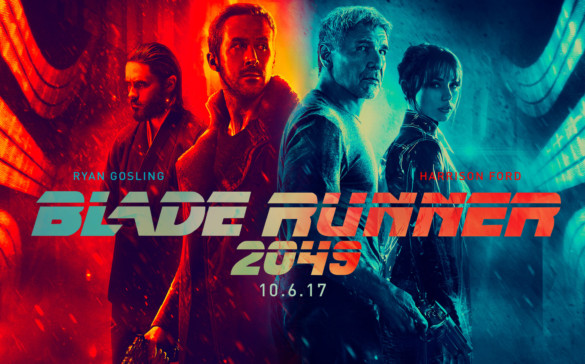 I’m not even sure where to begin with this one. If you listened to our Most Anticipated of 2017 show back in January, you would’ve seen that Blade Runner 2049 was my most anticipated film of the year. I love and adore Ridley Scott’s original Blade Runner (the Final Cut anyway), for reasons you can hear on this week’s Extra Film podcast, but more than that I’m amped for 2049 for one name only; Denis Villeneuve.

There are many directors working today that I love, but Villeneuve might be my favorite right now. Arrival, I think, will go down as one of the best sci-fi films we’ve ever seen. Ironically enough, in 30 years we may look back on that film in the same ways we do Blade Runner right now. Additionally to that, Sicario was one of the best films of 2015 if you ask me and was arguably the best directed movie of that year. Enemy and Prisoners are also good films, but let’s not forget his foreign-language masterworks in Incendies and Polytechnique. Villeneuve is easily batting 1.000 at the moment for me and is hitting either homeruns or at worst triples. The quality of his work is unmatched by most directors at the moment. Paul Thomas Anderson and Jeff Nichols are two directors that come to mind as players in his circle, but Villeneuve is equally in the game so to speak. Even greats like Steven Spielberg or even Scott himself have been hit or miss the last seven or eight years. Sure, some of this is subjective, but there is a level of objective craft that you can’t ignore. Maybe Villeneuve doesn’t speak to you in the same ways he does to me, and that’s fair, but the tension of Sicario, the emotion of Arrival, the humanity of Enemy, the performances in Prisoners and the master character work of Incendies I find powerful in his filmmaking.

I say all that to say, Blade Runner 2049 is in the perfect hands. Blade Runner relied heavily on ambiguity to tell its story, and as we’ve seen in both Arrival and Enemy, Villeneuve does ambiguity well. We also saw how much of a grasp he had on sci-fi aesthetics in Arrival, which propelled some of the best imagery of last year. And speaking of cinematography, Roger Deakins – who shot Blade Runner 2049 – was up for Best Cinematography for Villeneuve’s Sicario. So the two already have a great working relationship, and if you’ve seen the trailers for 2049, this very much could be Deakins’ year to finally win that elusive Oscar. I’m not sure if Blade Runner needed a sequel, but given that’s what studios are doing, I’m glad it’s in very capable hands.

I’m also excited to see what Harrison Ford’s role is in Blade Runner 2049. Since 1982, there has been heavy debate over Rick Deckard’s humanity and I’m curious to see if they answer the questions left at the end of Blade Runner. I don’t expect Villeneuve to fully answer that, but it will no doubt have to tackle these questions in some way given that Ford is physically 30 years older. And where does Ryan Gosling fit in in all of this? Does Rachael show up in this film? There’s so much to anticipate and I’m eager to see how 2049 compliments Ridley’s original vision.

Lastly, I have to mention Benjamin Wallfisch and Hans Zimmer. The original score by Vangelis for Blade Runner is something to behold and was quite easily one of the best movie scores of the 1980’s. There is a lot for Wallfisch and Zimmer to live up to, but if there’s another name in Hollywood I trust as much as Villeneuve, it’s Hans Zimmer. In a general sense, the scores for Villeneuve have been quite effective, so I expect nothing less for this film as well.

What about you? Are you excited for Blade Runner 2049?

Here’s what else you can see in theaters this weekend:

The Mountain Between Us
My Little Pony: The Movie
Brawl in Cell Block 99 (limited)
Una (limited)
Loving Vincent (limited)
The Florida Project (limited)