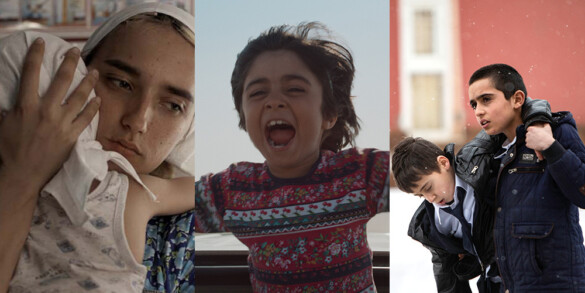 The second round of 2021 Chicago International Film Festival reviews takes us to a Ukrainian prison, the Iranian roads, and a cold Kurdish boarding school. Here’s another dispatch of wonderful international cinema.

Inspired by real-life cases, the film follows a group of mothers imprisoned in a Ukrainian jail. The main focus is Leysa (Maryna Klimova) who gives birth right as the movie starts and has to raise her son inside the prison. By the time he reaches his third birthday, state conditions dictate that he will be sent to an orphanage.

Like Tatiana Huezo, Heidi Ewing, and Teodora Mihai, Kerekes joins the line of recent nonfiction filmmakers who successfully turn to fiction. In this case, 107 Mothers imitates a documentary. Kerekes combines interviews with inmates, conducted by prison ward Iryna (Iryna Kiryazeva), with careful observations of life inside the nursery. The intimate cinematography adds weight to the verité style of certain portions of the film. It’s almost as if someone has dropped a bunch of cameras inside the prison and someone decided to edit their footage together.

Oddly, it’s not Iryna the most interesting character of the film. Despite being in charge of all these mothers, Iryna is single and doesn’t have children; she seems to be living her social life through the reading of letters sent to inmates. Eventually, she takes a certain interest in Leysa and his son, which awakens her complicated desire for motherhood.

Although 107 Mothers doesn’t have a strong narrative arc and Iryna’s life overshadows Leysa’s struggles, the film does manage to convey the monotony of prison life while highlighting the hardships of motherhood inside it. It’s a skillfully directed film that feels like a documentary, therefore, allowing us to peek into a specific place that nonfiction maybe wouldn’t have allowed us to profoundly reach.

A six-year-old boy loudly asking for his phone back isn’t a novelty in any family road trip, but in Panah Panahi’s wonderful feature film debut Hit the Road, it’s the first sign that something is off.

This charming kid (Rayan Sarlak) is traveling in an SUV alongside 20-year-old brother Farid (Amin Simiar), father (Hassan Madjooni), mother (Pantea Panahiha), and poor Jessy, their sick puppy. But this is no ordinary trip. Between the funny interactions between sarcastic father and witty son, the Batman references, and the charming family sing-alongs, the camera often lingers in dad while a melancholic piano tune plays out in the background. Little hints involving the brother’s fate are gradually thrown our way, sometimes in an amusing manner, until the purpose of the voyage becomes obvious and there’s not much to laugh about. But laughter is still the best tool to deal with it all anyway.

You could swear young Rayan Sarlak was just being filmed, documentary style, during a particularly weird car trip. That’s how authentic his performance is. Despite being very loud and borderline annoying, he lights the film up with his innocence, hilarious delivery, and overflowing energy. Hassan Madjooni and Pantea Panahiha are not far behind, as both deliver excellent performances in their own playful, loving way.

Panah Panahi’s work has the naturalistic touch of his father, the great Jafar Panahi, and a clear influence in the political oppression his family has gone through (Jafar is still banned from directing or leaving Iran). However, the young filmmaker shows unique talents of his own by spectacularly commanding long shots and balancing comedic tones with painful sorrow. The result is a beautiful and tender family love story that skillfully handles its tough themes about loss through a combination of laughter and melancholy.

The joy of Hit the Road’s protagonist child is completely absent in the entirety of Ferit Karahan’s award-winning Brother’s Keeper, a grim drama set in an all-boys Kurdish boarding school that is as cold as its snowy surroundings. Here, we follow 12-year-old Yusuf (Samet Yildiz) as he tries to get medical care for his very sick friend Memo (Nurullah Alaca), but incompetence, bureaucracy, and lack of empathy from the people in charge makes it impossible to do so.

While Memo lies unconscious in the precarious infirmary room (whose slippery entrance ironically threatens to injure those who dare to enter), a parade of institutional idiocy, from teachers to the headmaster, tries to get help from an ambulance as well as figure out the mystery behind his condition. The adults point fingers, blame the students, and show both their selfishness and their complete lack of preparation to deal with such an important situation; the weather and the school’s pitiful state aren’t helping either. Yusuf observes everything quietly, with eyes that could burst out tears at any moment.

Aided by his own experience growing up in a similar institution, Karahan smartly builds tension, frustration, and intrigue until one last piece falls into place to shine a light on the true culprit behind the accident. It’s not one action or decision. It’s the culture of fear that stopped a kid from speaking, it’s the headmaster’s negligence and the unsafe living conditions. But will the people with power accept their responsibility or use an innocent (and compassionate) scapegoat to avoid the blame? With this last question, Brother’s Keeper exquisitely puts a bow in its damning observation of social oppression.