Movie Review: ‘The French Dispatch’ Has An Enchanting Charm And A Crafty Wit That Propels It To Grand Heights 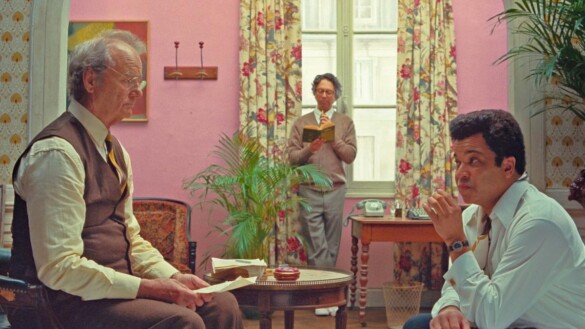 Synopsis: A story about journalists set in an outpost of an American newspaper in a fictional 20th-century French city that brings a collection of stories to our attention that were published in “The French Dispatch.”

When it comes to Wes Anderson films where do you even begin to discuss or understand their not sequential storylines and nuanced subtleties. I’ll begin by saying that The French Dispatch is a stylistic anomaly; a breath-taking piece of storytelling that is almost hypnotic in the way it expresses itself – I genuinely couldn’t take my eyes of it for fear of missing something beautiful. As we all know, Anderson is an auteur of the highest order, each film as memorable as the last in a plethora of ways. Well, this film is based on Anderson’s love for The New Yorker – in all its quirky glory – with its host of intuitive and original stories. Anderson does a superb job of tracing – but with his own unique flair obviously – this famous paper under a new name, the eponymous “The French Dispatch” newspaper, and explores three flamboyant stories written by three different employees of this fictional newspaper.

It is almost like an anthology of different stories, all based on similar real-life stories and characters. Let me break it down; the fictional French Dispatch newspaper is based in the fictional French city of Ennui-sur-Blasé (its literal translation is Boredom-on-Indifference, and yet it is far from that). Each story is unique to the previous, not only in its storytelling but also in their style; all of them are shot in a variety of ways, using different techniques as well as being the same style at times (is that even possible?), all of them possessing different areas of absorption, sucking you in with a great enjoyment and with this engrossing nature. To say I was a fan is a massive understatement.

As everyone knows, Wes Anderson’s films are shot beautifully; very distinctively, and ever so special – the symmetry and framing in this film are mesmerizing. It is a meticulous aesthetic that is adored by hard core Wes Anderson fans everywhere, and stylistically, this is up there with the best of them, of that I’m certain. The cinematography by Robert Yeoman wasn’t its only success though, the skills of Alexandre Desplat with the score and the expert editing from Andrew Weisblum (both of whom have worked on numerous Anderson projects) were both perfect and matched the pacing of the sequences, even dictating scenes as they played out. All the film’s technical aspects were a joy and worked in perfect harmony with one another.

It is probably about time I talked about the film’s premise. The French Dispatch is about a fictional American newspaper of the same name in a 20th-century French city that brings to life a collection of stories that were published in said newspaper. The editor of the newspaper, Arthur Howitzer Jr (Bill Murray) is based on Harold Ross of The New Yorker. Broken up into the three acts and filled with an ensemble cast full of anyone and everyone. Part 1 – “The Concrete Masterpiece” – surrounds the story of Moses Rosenthaler (Benicio Del Toro), a mentally disturbed artist of incredible talent, locked up for decapitating two men in a bar (as you do), his love affair with prison guard Simone (Léa Seydoux) and his dealings with obnoxious art dealer Julien Cadazio (Adrien Brody). This story is narrated and written by J.K.L Berensen (Tilda Swinton), an employee of the paper.

Part 2 – “Revisions to a Manifesto” – focuses on a student protest breaking out in the streets of Ennui, being known locally as the “Chessboard Revolution” (kids and their funny names). Lucinda Krementz (Frances McDormand) is reporting on the story whilst trying to maintain journalistic neutrality but falling for the charm and boyish good looks of revolutionary leader Zeffirelli (Timothée Chalamet). The final part – “The Private Dining Room of the Police Commissioner” – involves Roebuck Wright (Jeffrey Wright) a food journalist who revisits his most famous story whilst on a talk show. Whilst having dinner at The Commissaire’s (Mathieu Amalric) house, reporting on famous police officer and chef, Lt. Nescaffier (Stephen Park), The Commissaire’s son is kidnapped, leading to a chaotic search for the young boy.

The French Dispatch just has a bit of everything; humor, great storytelling, great animation (the animation in part 3 is sublime), memorable characters, slapstick violence. Speaking of the acting, it was just so perfectly oddball and niche like, particularly the characters of part 1. Brody, Del Toro, Seydoux, and Swinton were all exceptional, extremely humorous, and edgy – typical Anderson. They all bought into the romanticism of Anderson’s vision and storytelling ability.

It really is a fabulous film, even for Anderson it was unique; splitting it into three stories in a world of one overriding story, unusual for someone who usually focuses on singular narrative, and somewhat linear, films. I was so enamored by it; I rate it as one of his best in a great portfolio of films, all three parts were just so different to each other whilst also possessing the others glamour and charm, which is kind of strange but oddly alluring. Die-hard Anderson fans should really love it, but The French Dispatch should also win over a new wave of fans, now that is a testament to its flamboyancy and otherworldly appeal.