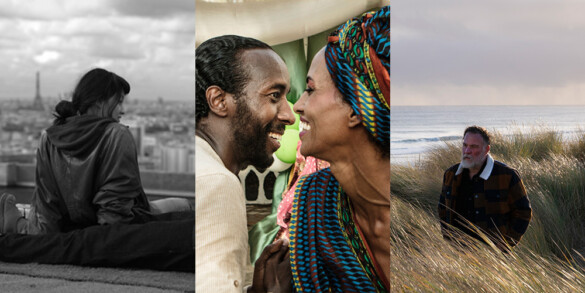 The 2021 Chicago International Film Festival offers a rich and vast array of quality international cinema, and for this dispatch of reviews, we are going to take a look into three films centered around love. One is sexy, one is tender, and one is highly emotional.

We start with Jacques Audiard’s Paris, 13th District, which intertwines three lives in one erotic package. Emilie (Lucie Zhang) is an abrasive Taiwanese Parisian who, after a week of sex, falls in love with her new egocentric roommate Camille (Makita Samba). There’s one problem: he’s not interested. Next, we meet Nora (Noémie Merlant), an optimistic 32-year-old woman who’s just arrived in Paris to pursue a law degree and escape a difficult past. However, her classmates somehow mistake her with a cam girl called Amber Sweet (Jehnny Beth) and push her to drop out which eventually leads her to resume real estate work with none other than Camille.

One could argue that this is a quartet love story, but the development of Beth’s Amber Sweet isn’t anywhere near the level of the other three, which have a lot of screen time to become sympathetic, compelling, and flawed characters. Although the story ultimately doesn’t provide any deep or meaningful love lesson, the writing team of Audiard, Céline Sciamma, and Léa Mysius do a good job of establishing interesting relationships and exploring the complexities of dating without forgetting the technological element of it all; there’s no ideal romance on sight, but desire, messy emotions, a hunger for reconciliation with oneself, and a lot of sex.

Anchored by three excellent performances from Zhang, Samba, and Merlant, as well as stunning black and white cinematography and use of color by DP Paul Guilhaume, Paris, 13th District is a satisfying and easy watch brimming with honesty and eroticism.

Next, we land in Africa with Khadar Ayderus Ahmed’s feature debut The Gravedigger’s Wife, a superb love story that also happens to be the first Somalian Oscar submission in history. There’s a lot going on in the race, but I’ll be cheering for this one to get far.

Guled (Omar Abdi) is a 45-year-old gravedigger in desperate need of money to finance a life-saving operation for his ill wife Nasra (Yasmin Warsame). Both live in relative poverty with their son Mahad (Kadar Abdoul-Aziz Ibrahim) but love each other intensely, and this love is the engine of the story.

In every embrace, you can feel the emotion and deep love between Guled and Nasra. A charming scene involving a party warms your heart because of Nasra’s bravado to sneak into it as well as Guled’s happiness watching her dance, only to suddenly break it when she starts feeling sick. The outstanding performances and chemistry between Warsame and Abdi create an authentic connection which is then translated into an immediate emotional immersion into the film.

When Guled goes on a journey to save Nasra, you will be cheering for him. Every roadblock adds to the tension of this deeply intimate story, so when a little hope comes by, it feels like a lighthouse in the middle of a storm. Help from friends and Mahad’s charming attempts at raising money almost make my soul explode in hope.

Spoken entirely in Somali and featuring a Somali-only cast, The Gravedigger’s Wife is a film brimming with authenticity that, supported by three riveting performances, highlights how love and family fuel us, and it does so without the need of being overly dramatic. Ahmed achieves a perfect, loving balance.

Finally, we go to a Scottish isle to explore romance and loneliness in Bouli Lanners’ tender and tranquil love story, Nobody Has to Know.

The director himself plays Phil, a farmer suffering from amnesia as a result of a stroke. Millie (Michelle Fairley), daughter of his boss, soon comes along to help him recover his memories. But eventually, longing eyes become words as Millie reveals to Phil that, before his amnesia, they were lovers. Although Phil doesn’t seem too reluctant to question this revelation, what should we, as the audience, do?

The film uses its setting to explain the personality of the characters. The landscapes are vast and beautiful, but also quite empty and austere. There’s no modernity in sight which is a reflection of Mill’s life in a small community next to a religious family. Despite the extension of her surroundings, there’s nowhere to escape from the oppression of tradition. Just like Phil, a foreigner who doesn’t seem to fit that well into this town, she’s lonely and both the amnesia and the love offering is a chance for them to create a happy story, get rid of isolation, and just be swept away by their emotions. In the center of this heartfelt romance is the enormous chemistry between Fairley and Lanners who deliver warming performances that subtlety transform as love grows between them.

Nobody Has to Know runs along quietly, carefully building drama, immersion into life in this small town, and romantic tension. And just when you think you’ve figured out what Lanners is doing, the devastating ending hits you like a truck.

Paris, 13th District, The Gravedigger’s Wife, and Nobody Has to Know are screening In-Person and virtually as part of the 2021 Chicago International Film Festival which runs from October 13 to 24.