Movie Review: ‘I Carry You With Me’ is When Love Surpasses Borders 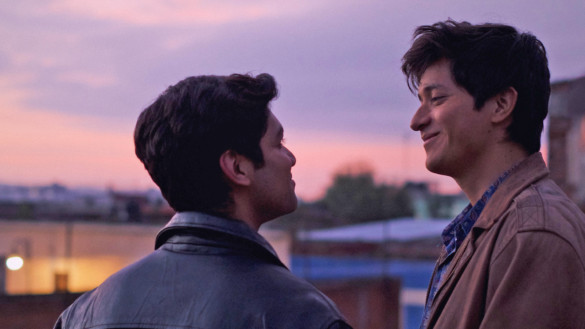 Synopsis: Based on true love, this decades spanning romance begins in Mexico between an aspiring chef and a teacher. Their lives restart in incredible ways as societal pressure propels the couple to embark on a treacherous journey to New York with dreams, hopes, and memories in tow.

Emigrating is hard. Even if leaving your home and family behind takes a lot of courage that not everyone has, thousands of people migrate to the U.S. every year looking for the “American Dream”. But as Iván, our narrator, says: “the American Dream happens in slow motion. It takes years”. Everything people go through, they do it for a better life for themselves, and especially their loved ones.

The story is about Iván —most of the time performed by Armando Espitia—, an aspiring chef living in Puebla, Mexico, and single father. After not getting a promotion in the restaurant he works in, he struggles to make a living and also support his son. One night out, at a gay bar with his childhood friend Sandra (Michelle Rodríguez), he meets Gerardo —most of the time performed by Christian Vázquez—, and they connect instantly.

Iván and Gerardo get closer and grow into a sweet relationship, but since it is set in 1994, they must keep it a secret. When Iván’s family discovers he’s dating a man, he is forced to cross the border promising both Gerardo and his son that he’ll be back. Within its dangers and painful goodbyes, Iván successfully gets to New York City, where his dreams will come true. Or that is what he hopes for.

After a year of being apart, Gerardo quits his teaching job and crosses the border to be reunited with Iván. Time passes, they finally can be together and be who they truly are. Their careers are growing and they are a happy couple, at last, but Iván hasn’t seen his son since he left Mexico and he knows he promised him to return. If he goes to Mexico, he can’t travel back to the U.S., so now he has to decide whether to leave Gerardo —who doesn’t want to go— and everything they built together or forget about his son, who can’t get an American Visa.

At its core, I Carry You With Me (or Te Llevo Conmigo) is a beautiful and tender LGBTQ+ story. But it is way more than that. It is a story that a lot of people who migrate experience and can empathize with. Based on the real story about the couple with the same names and personal friends of the director and co-writer, Heidi Ewing; it tries to cover a lot of topics and they are all well-achieved. Of course, problems like homophobia are present, but the movie chooses to emphasize their struggles as immigrants and how their love evolves throughout time. The first act is a celebration of their sexuality, even if what they have is still taboo, they manage to have fun and accept who they are, and love each other without fear.

I Carry You With Me is Ewing’s first narrative feature after working with documentaries —one of them an Academy Awards nominee— and she exploits her artistic voice blending the two genres. We’re surprised with the real Iván and Gerardo telling their own story at some point. Their scenes work better if you are aware that it is based on true events, their events. Otherwise, it can feel like two different movies in one (not that this is a bad thing, though). The idea came after Ewing’s Detropia was released at the Sundance Film Festival back in 2012, where Iván and Gerardo went to support their friend. Eight years later, I Carry You With Me premiered at the same festival.

LGBTQ+ stories are usually led by white characters, and even if it doesn’t mean that what they go through isn’t real or difficult, it is great to see this type of love story told by people of color, in this case, two Latino men. They not only have to struggle because of their sexuality at a time it was less accepted, but they also deal with class, money, and racist/xenophobic problems. It shows what it is like to grow as a gay man in a Latinamerican country. One of the most powerful scenes is where Iván calls his mother and tells her he is in a new relationship, and she asks him how is “she”. Or how both of their fathers reacted when they discovered they were gay at a young age. But as I said before, this film is more than that.

The performances of the two lead actors are fantastic and the chemistry between them honors the real relationship they are portraying. The combination of the acting scenes with the documentary footage (filmed by Ewing throughout the years) has a perfect balance, but it would have still made sense if it was either an all-narrative feature or a full-length cinema verite. The photography in charge of Juan Pablo Ramírez is stunning, physical, and atmospheric. It can drown the viewer in every scene.

I Carry You With Me is a film that will make you think about it even after you finished it, its portrayal of a lover bigger than any border will make you smile and cry in one sitting. The film will open in NYC and LA theaters on June 25. Just in time before Pride Month ends.