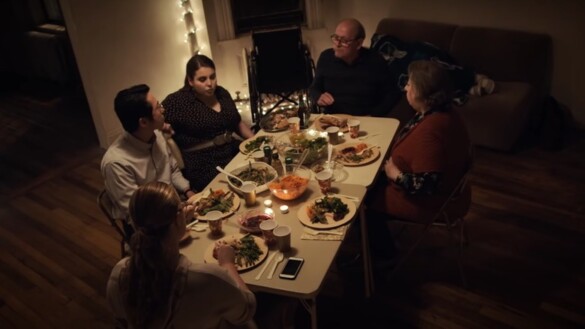 Synopsis: Erik Blake gathers three generations of his Pennsylvania family to celebrate Thanksgiving at his daughter’s apartment in lower Manhattan. As darkness falls and eerie things go bump in the night, the group’s deepest fears are laid bare.

After being nominated for a Pulitzer and winning the Tony for Best Play, writer Stephen Karam adapted and directed his dark dramedy about a dysfunctional family on Thanksgiving night in an apartment that comes more like a horror film. The walls are nothing but fat bubbles, the windows are disgusting, and the elevator in the slim hallway has a drawing of a phallus. It’s two floors, yet everything feels confined into one, and strange noises and flickering lights make the place even more frightening. What kind of place is this for Thanksgiving? One that exposes the family secrets, for sure.

Brigid (Beanie Feldstein) and Richard (Steven Yeun) are a couple who move in and invite her family from Pennsylvania up to their place for the day. Parents Deirdre and Erik, played by Jayne Houdyshell and Richard Jenkins, respectively, sister Aimee (Amy Schumer), and their dementia-suffering grandmother (June Squibb) all head over. Only Houdyshell comes from the original Broadway cast to replay her Tony-winning role. Throughout the film, they prepare for dinner and talk about what they’ve been doing; come Thanksgiving dinner and the mood begins to slide away into something more serious and family-breaking.

The Humans is a surprising film that, while not as big as August: Osage County, still has a tight ensemble with great actors to play the part as exactly as it was meant to be. It is in the title: they are just human beings with human problems and are not immortal to their faults. Feldstein and Yeun provide a special quality to their roles as an interracial couple and Schumer, who is known for her comedy, as the sister who has a medical condition while dealing with a romantic breakup. Schumer seems the odd casting choice, but she doesn’t go overboard with the quick jokes like from her famous TV show. Meanwhile, the parents are practicing Catholics while the children have lapsed.

Adapting any play into a movie is tough, especially one with Tonys attached to it, and harder when Karam takes the John Patrick Shanley (Doubt) route by also directing the movie version. But Shanley had directed movies before, Karam is making his debut here as one. While it is not perfect, Karam makes the right decisions with each shot and composite as he is able to expand on his story. Director of Photography Lol Crawley (45 Years) is able to put to each frame the expression and physical state to the deterioration of the home and the characters themselves. It’s set in one location, yet does not feel like an actual play just being filmed.

What starts as a simple melodrama with dark comedic timing turns into a family existential crisis where each character comes to a certain realization they never thought about. Everyone but Squibb’s character Momo, that is, who simply rambles randomly but her dementia is seemingly a blessing for her – and a warning towards the others.