Movie Review: The great ‘Toy Story 4’ does the impossible 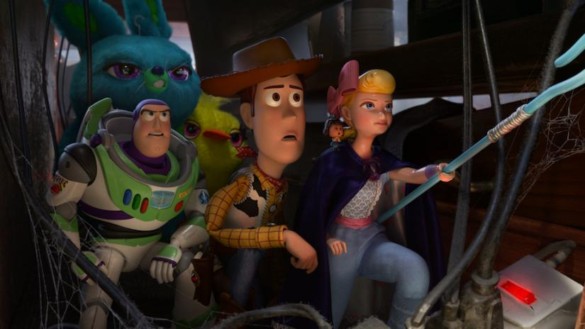 Synopsis: When a new toy called “Forky” joins Woody and the gang, a road trip alongside old and new friends reveals how big the world can be for a toy.

Nine years ago, Toy Story 3 wrapped up the 15-year saga of sentient playthings in a perfect bow. At least, that’s what we thought. The lifespan of the franchise now sits at 24 years, much to the chagrin of myself and many others. We live in an age of cheap sequels in the face of guaranteed profits. There are few more sure things than the profitability of a Toy Story film. The original film revolutionized the world of film (whether it was, overall, for better or worse might be up for debate, but the Toy Story franchise is undeniably a landmark in the history of cinema) and the sequels somehow managed to feel just as fresh. Maintaining their hot streak nine years after a beloved threequel seemed a risky proposition. I am happy to report that the risk was worthwhile. Never again will I doubt a Toy Story movie. Make 10. Make 20. Let’s see how long this can go on. Against all odds, Toy Story 4 not only justifies its existence, but it is one of the better films of 2019.

The Toy Story films have always addressed ideas of mortality and legacy, with each approaching the ideas from a unique angle. Toy Story 4 continues this pattern, while adding in quandaries regarding free will and the shifting priorities that come with aging. As I’m sure you have seen from the film’s marketing, the film revolves around a sentient spork-turned-toy, named Forky, who is brought to life by Bonnie, the new owner of our old toy friends, when she glues googly eyes on him, smacks on popsicle stick feet, and wraps around a set of pipe cleaner arms, for good measure, in a kindergarten arts and crafts class. Bonnie’s new “toy” immediately becomes her favorite, and Woody takes it upon himself to protect Forky at all costs. Through various circumstances, Woody and Forky end up separated from the rest of the gang (who are travelling with Bonnie’s family on a road trip.) The pair end up at a carnival with the long-lost Little Bo Peep, last seen 24 years ago as Woody’s love interest in the original Toy Story. On paper, the idea feels forced and out of touch with the evolution of the series. In practice, Bo Peep is a perfect vessel to add another layer to the exploration of purpose that we have gotten used to in the series.

Seeing the woman (female toy? Porcelain princess?) he thought was gone forever makes him reconsider his entire purpose. Bo Peep lives a life untethered. She has no owner whose happiness she feels obligated to nurture. This is the first time the idea of foregoing the defined purpose of these walking, talking toys has been explored. Prior to Toy Story 4, Woody’s motivations have been on tracks. With the introduction of Forky, whose entire purpose was redefined by the Frankenstein-ian attachment of googly eyes, Woody questions what his life is (and should) be about. The existential crisis goes far beyond valuing ourselves through our work, questioning the very idea of what drives us. Forky becomes an agent of chaos in the Toy Story universe, causing the biggest shake-up in the history of the series.

It should be noted, however, that the crisis is frequently brushed aside for more straightforward comedy. This is the most comedically-focused film of the series, driven by new characters like Key and Peele’s carnival prize stuffed animals and the breakaway star of the film, Duke Caboom, the Canadian toy world’s answer to Evil Knievel, perfectly voiced by Keanu Reeves. The frequent comedic asides make Toy Story 4 an utter crowd-pleaser, but the sidestepping around the existential dread of Forky prevents it from reaching the heights of its predecessors. That has much more to do with the transcendent greatness of the first three installments than the still very good Toy Story 4; the bar is insanely high. There is a more meditative quality to the original trilogy. Toy Story 4 grapples with many intensely thought-provoking themes but doesn’t dig nearly as deep. The shallow analysis creates a degree of ambiguity through which you can project your own interpretations, but it would be nice if the film tried to explore everything a little more thoroughly.

Back to the humor, though- this movie is FUNNY. As a pure comedy, it is as effective as they come, using a diverse arsenal of jokes that range from meta-commentary, to threaded gags, to drawn-out, timing reliant bits that got huge reactions from the audience.  The emphasis on humor is a bit of a tonal curveball, as the prior films, while certainly funny, were more a bit more focused on characterization and world-building. It makes Toy Story 4 a bit less memorable, overall, but it certainly accomplishes its goals. Throw in some surprising horror flairs (if you want to scare people, mannequins are always a good choice), and you have a movie that feels unfamiliar in the best way. You can feel the care that went into the revival of this beloved property.

Having just watched the prior three films, it is remarkable how far animation has come in the near-decade since the previous Toy Story film. The photorealistic environments in Toy Story 4 ground the film in ways that no previous entry was able to. The world feels far less heightened, bringing these characters closer to our reality than ever before. You can feel the felt and stitching making up the exoskeletons of the toys. This is especially an asset in a few sequences of body horror involving the removal of a voice box- chilling stuff. Light reflects off the plastic and porcelain beautifully, making for an aesthetic marvel. It’s truly a highwater mark for Pixar, visually. Their IP might be recycled, but there is no denying that the studio continues to revolutionize the art of digital animation, year after year.

It might be letting the film off easy to say that merely making me feel like Toy Story 4 needed to exist, at all, would have been enough. One of the most accomplished studios of the century should be aiming for something far higher, but I was honestly expected it to feel like a complete waste of everyone’s time. I saw very few scenarios where it would end up feeling like an endeavor worth taking on. I am beyond pleased to say that not only did they meet my expectations, they successfully changed the way that I will view delayed sequels to lucrative properties, in general. While it’s not perfect (and maybe doesn’t live up to its predecessors), it is kind of a miracle of modern filmmaking that a movie that seemed to be far beyond its expiration date managed to stay fresh after all these years. The film ends on a beautiful note and is a reminder that after 24 years, all it takes is a panning shot of these wonderful Toy Story characters and some swelling music to make me well up. It’s a testament to what might just be the greatest quadrilogy in the history of film.