The Unexpected Understanding of Tea and Sympathy 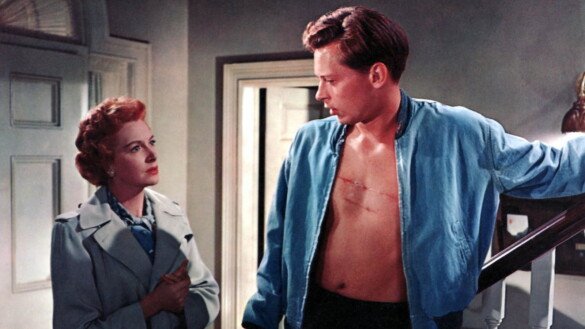 As far as its position within the queer cinematic canon, Vincent Minelli’s Tea and Sympathy, based on the play of the same name by Robert Anderson, is a hard film to pin down. Based on what I, an amateur film historian, had heard from various sources, the film was not much more than a fear-mongering, negative portrayal of homosexuality in the form of a Technicolor melodrama. Given my expectations, I was surprised to instead experience a highly sensitive, considerate reflection of post-war masculinity and, no pun intended, a sympathetic portrayal of a young man caught up in the middle of society’s conflicting expectations for men in the mid-century.

By the 1950s, the portrayal of American masculinity on film had already changed drastically since the art-form’s debut. In the earliest decades of filmdom, when cinema was still finding its footing, we think of figures such as Chaplin, Keaton, Arbuckle, Chaney; for lack of a better word: clowns. At the same time, the lines between masculinity and femininity were relatively blurred, as comedic actresses such as Mabel Normand had a great degree of creative control over their work, and could take on roles more typical of male performers.

Japanese actor Sessue Hayakawa had been one of Hollywood’s earliest sex symbols in the late 1910s, both alluring and frightening women as an unfamiliar figure of foreign masculinity. By 1922, however, anti-Japanese sentiment and unideal business dealings forced Hayakawa to leave Hollywood. The year before saw the Italian-born Rodolfo Pietro Filiberto Raffaello Guglielmi di Valentina, better known as Rudolph Valentino, in his star making role in Rex Ingram’s The Four Horsemen of the Apocalypse, in which he danced the tango and became the screen’s first “Latin Lover”. While his career would only last until his untimely death in 1926, other actors such as John Gilbert would capitalize on their dark, vaguely European features to create a feeling of the exotic for a country who’d just had its world-stage debut a decade prior. This decade also introduced the archetype known as the “Swashbuckler”; a muscular, adventurous figure known to ravage women and look for danger. It would not be out of turn to assume these characters rose in popularity due to the effects of WWI on the American psyche, now that so many men had risked their lives and seen the world at the same time.

The thrill of adventure never went away in American cinemas, as seen by the dominance of the Western throughout the early decades. While this offered audiences a glimpse of the “long-gone” American male, the stars of the 1930s retired from the adventures of the swashbucklers, instead putting on their coat-and-tails, mingling with high-society, and attracting women not with their strength, but their charm. These stars, such as Clark Gable, Robert Taylor, Fred Astaire, Frederic March, and Cary Grant, appeared on screen to audiences, many of whom were struggling through poverty due to the Great Depression, and offered an image of the aspirational, the dashing, and in some cases, the effeminate. While authentic portrayals of impoverished American life did exist at the time, many audiences went to the movies with the express pursuit of escapism, so that for ninety minutes or so, they could still believe in the American dream.

Just as America’s one-year involvement in WWI forced the stars of American cinema to change from clowns to heroes, the American presence in WWII had drastic effects on the cinematic portrayal of masculinity that can still be felt in the current cinema. Combined with triumph, was a memory of immense loss and trauma, resulting in a more complex, down-to-earth male movie star, one with a cynical look at the elite and refined. This decade saw the birth of gritty noir anti-heroes (Bogart, Mitchum, Cotten), the neo-realistic everyman (Fonda, Tracy), and the defender of the American ideal in the East and the West (Stewart, Wayne). Of course, that’s not to say that the decade’s previous stars disappeared, but they had to adapt, such as the debonair Astaire who now had to compete with the athletic Gene Kelly. The aesthete, the dandy, and the effeminate male was both not only a far cry from aspirational, but a threat that had to be dealt with. Enter the queer-coded villain.

Characters akin to the 1930s leading male now served as foils to our brutish leads, appearing as tricksters, the ultimate villain to the post-war hero. Think, for example: Joel Cairo in The Maltese Falcon, Waldo Lydecker in Laura, or Addison DeWitt in All About Eve, the latter two which used their ambiguous sexuality to entice innocent young women. For an American man who was at the cinema from the 1920s-1940s, this constantly conflicting portrayal of the  male “ideal” would naturally produce a sense of confusion in regards to one’s identity.

While directed by Vincent Minnelli, Tea and Sympathy has an undeniable “Sirkian” quality in its use of Technicolor, story, and themes. Douglas Sirk, the master of Technicolor melodramas, frequently dealt with themes of gender and subtextual homosexuality. In Tea and Sympathy, a young man in his senior year at an all-boys prep school (John Kerr) is teased and ostracized constantly by his peers for his sensitivity and fondness for typically feminine pursuits, as well as his lack of sexual interest in women. While never stated explicitly, the film heavily implies that the film’s other characters assume him, Tom, to be gay.  “I’m always falling in love with the wrong people,” he exclaims. While subtle, those in-the-know will understand this deliberate use of genderless language to imply what could not be said out-loud in a 1950s movie theater. While Tom’s father, who subscribes to the mass machismo culture, is frustrated by his son’s inability to conform, the only person who offers him any sympathy is his headmaster’s wife, Laura, played by Deborah Kerr. By the film’s end, Tom practically has a mental breakdown spurred by his classmates’ bullying, concluding with an implied sexual encounter with Laura, who pleads: “Years from now, when you talk about this – and you will – be kind.”

I first heard of Tea and Sympathy through the 1995 documentary The Celluloid Closet, which examines Hollywood’s historic portrayal of homosexuality throughout the decades. In the brief segment about the film, narrator Lilly Tomlin relays the harsh gender-expectations of the 1950s, during which the male-female binary was arguably at its most drastic: “Seeming gay was almost as bad as being gay, so a man had to watch his every step”. One of the documentary’s contributors claims that the film is about “curing homosexuality”, showcasing a scene in which Tom’s roommate teaches him how to walk “like a man”. Respectfully, I have to disagree with the contributor. That scene in particular, in which Tom tries to emulate his friend’s walk, does the exact opposite of proposing the idea of curing homosexuality, instead showing the audience how ridiculous the idea of curing a man’s nature truly is. Tom watches his friend walk “the right way” with raised eyebrows and confusion, as the audience comes to realize the unjustified intricacies of what we deem “masculine” and “feminine”.

The film is not ignorant of the issue it is portraying. Audiences both modern and contemporary would understand that the story overtly condemns Tom’s classmates while sympathizing with his unique disposition. Tom’s father expresses his paternal frustration to Tom’s headmaster and Laura: “I want to be proud of him, that’s why I had him in the first place,” exposing the expectations we place upon young men at birth. Along with John Alton’s stunning cinematography and other highly capable cinematic techniques, Tea and Sympathy is a fully realized, surprisingly complex study of era’s, the century’s, and the art-form’s complicated, often contradictory, relationship with gender.