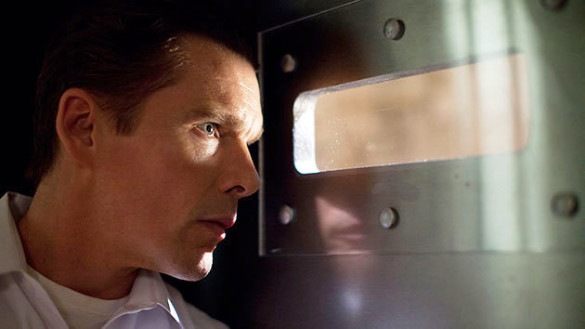 Synopsis: A family is held hostage for harboring the target of a murderous syndicate during the Purge, a 12-hour period in which any and all crime is legalized.

Given the script, I think James DeMonaco’s direction is pretty good which puts you into the house of a family that is head heavy during the annual Purge. While predictable given the genre, I love the camera work. The beginning of the film opens with a montage of street camera’s catching street violence and the chaos that the Purge causes every year. DeMonaco also uses a camera built into a remote controlled toy robot that belongs to one of the child characters which was a little different and added some creepiness to the film. DeMonaco also uses some home security camera’s to capture the craziness outside the family’s home to add some more creepyness to the film. While, it lacks creepy, it’s an interesting style choice and does show how disturbing the situation is and how people act in that environment. The best part however, is an action sequence in the third act of the film which was really well shot and a lot of fun to watch on screen. It almost feels misplaced in a film of this genre the way it’s done but for the first time you you feel for the characters and what happens to them. DeMonaco gets some good performances, especially for some characters and the score adds a lot to this film. It’s a film that borders a lot of morality issues and could have gone a million different ways. While the script is mostly weak, DeMonaco captures the trauma of this family well and throws in some creepy moments from time to time, with some unique camera work.

The script for this film lingers somewhere between The Hunger Games, Panic Room, and Scream with a unique new government that condones killing people. “The New Founding Fathers” has now taken over the good ole’ US of A and had ordained an annual Purge to destroy the crime rate with some possible underlying motivations. Some have suspected they’ve created it to erraticate the homeless and weak which leaves room for lots of moral questions. As the Purge starts, chaos unfolds and one random homeless man finds his way into our protagonists home. Soon after, a group of ruthless, “educated” gang members show up forcing Ethan Hawke’s character to make a decision on whether to give up the homeless man inside his home or put his family into further danger. To kill or not to kill, that is the question. As the story unfolds, you find out that not only is Ethan Hawke having to deal with the question of killing a random homeless man but he also has to deal with moral issues between him and his son, who doesn’t believe the Purge is right to begin with. While the film has an interesting premise, I didn’t care for how the script opens up a few story arcs and never finishes or explains them. The group of bad guys chasing after a random homeless guys seems unrealistic but it’s the twist with our family’s neighbors that is so predictable and cheesy. The consequences of the family’s choices are never fully explored and it just leaves you experiencing a night that would be horrible, but you never really experience what the even would actually be like. The big thing with this film is the same thing with every film in this genre; it’s extremely predictable and the characters do things they would never do in real life.

The performances here are pretty aren’t terrible but they weren’t stellar by any means. Ethan Hawke plays the father of our protagonist family and leads out decently well. His emotions are felt pretty well and his action sequence is pretty awesome. The best performance here is actually the mother played by Lena Headey. Her character does some really stupid, predictable stuff but her love for her family is felt really well. The direction of her character toward the end of the film is incredible and makes up for any cheesiness her character does earlier in the film. Max Burkholder and Adelaide Kane have some interesting story arcs and are descent in their performances. Surprisingly, Edwin Hodge’s character has some important moments and he does a pretty good job even in the small role. The more surprising role was the main “villain” played by Rhys Wakefield. Obviously chasing after Heath Ledger’s “Joker” performance, he brings a creepy, yet polite performance to a character leading the gang after Hodge’s character. The rest of his gang is mostly faceless and are throw away characters anyway. Overall, you experience a family’s nightmare and not so much the Purge.

Nathan Whitehead gets the nod here to score and does a pretty good job. As an assistant under my main man Steve Jablonsky, Whitehead has done some good work before. The score adds some thrilling touches and does it’s job well for a genre that gets very predictable. The tones are screeching, very stringy and mostly what you think it would be. It has a few musical elements in a few small parts and isn’t one you’d probably listen to outside the film.