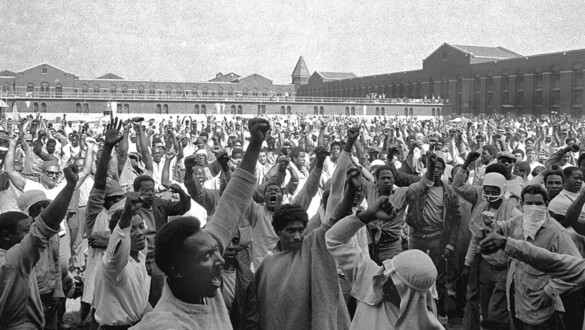 Synopsis: Stanley Nelson examines the largest prison uprising in US history, conducting dozens of new interviews with inmates, journalists, and other witnesses.

The phrase “It didn’t have to be that way” lands like a savage blow to your guts in Stanley Nelson and Traci A. Curry’s harrowing documentary Attica centered around the largest prison uprising in the history of the United States; a rebellion that ended in bloodshed.

Using interviews with ex-inmate survivors, journalists, and family members of prison guards, Attica sets the record straight and refuses to let time forget about a highly relevant event in the history of a country still fighting with racial inequity and police brutality.

The documentary drops you right at the start of the uprising, which saw 1200 inmates taking over the New York prison, hostages included. By doing this, the filmmakers grab your attention from minute one and never let you go. Gradually, the reasons for the rebellion are explained by survivors: Inhuman treatment, racism, no religious freedom, police beatings. “Fear… they ran the prison with fear,” one of them explains to the camera. Unfortunately, it’s what you would expect out of an American prison operated by white guards only, and whose inmate population was composed of around 70% Black and Brown people. The subhuman conditions, abuse, the rebellious attitude of new generations, the death of Black Panther George Jackson were all sparks that started the fire of an unavoidable conflict.

The prisoners demanded basic human treatment like showers, toilet paper, more time outside their cells, but the State didn’t like one key demand: Amnesty. In a bid for support, they requested the presence of an “Observer Committee” comprised of influential figures and civil rights activists such as Clarence Jones, William Kunstler, and John Dunne. Attica assembled a group of living members of this Committee which provide crucial and, at times bone-chilling, insight into the whole scene.

The documentary skillfully intertwines the interviews with powerful archival and surveillance footage that takes you right into the tension of the conflict while giving a glimpse into the hunger for humanity inside Attica. You see hundreds of inmates covering their faces, setting up tents, and digging a trench to use as a toilet. They raise their fists in defiance and, at one point, you manage to see the hope on their faces. However, there’s always eerie footage of armed guards watching over them from the rooftops.

Aided by Aljernon Tunsil’s excellent editing, a subtle score by Tom Phillips that smartly and slowly builds dread, and a frightening sound design, Nelson and Curry build the documentary like a timebomb. It all starts with the presentation of the white town surrounding the prison, then you hear about how people could only see the prisoners as animals — with casual racism thrown in the mix —, you learn that New York Governor Nelson D. Rockefeller was refusing to answer calls and show up to the prison. The increasing desperation of the inmates as negotiations stall and Observer Committee members talking about the somber feeling in the air are the last warnings of the bloodbath to come, which the directors don’t hesitate to show, sometimes in full color. The torture and humiliation of prisoners being dragged through excrement is a contrast to the glee of white guards leaving the prison after the assault. These are scenes that could very well belong to a concentration camp, but were in fact perpetrated on US soil by US forces by indirect mandate of the US president. “Who were the true criminals?” seems to ask Attica.

During a panel at the 2021 DXIFF symposium, Stanley Nelson explained that most of the former inmates interviewed for this film hadn’t had a chance to truly speak about their story. Nobody asked them. By giving them a voice, Attica brings a new perspective to the event and corrects the white narrative created by the failure of the media, which is steadily emphasized throughout the doc. Even though the inmates asked for specific trustworthy and objective journalists to be present during the negotiations, we learn that the rest of American coverage wasn’t interested in portraying the struggles or needs of the prisoners, rather paint them in a negative light and spread false rumors about how they were torturing hostages. Later on, we learn that these news outlets falsely reported that the death of the hostages was a product of slash-throating instead of bullets shot by white policemen assaulting the prison. This narrative is the one that permeated throughout time.

Attica is a visceral, relevant, and skillfully directed portrait of how a State failed to provide basic humanity to its citizens, turning to their most violent impulses instead; impulses pushed by prejudice and racism that cannot be and will not be forgotten by history.