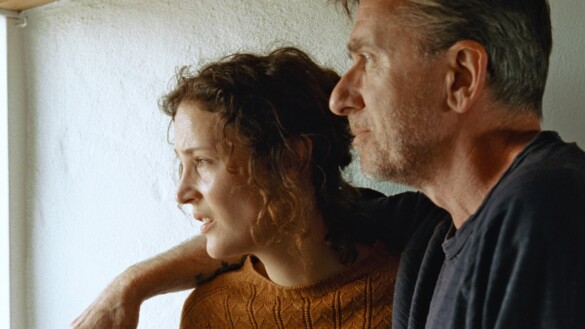 Synopsis: Two filmmakers retreat to Fårö island for the summer and hope to find inspiration where Ingmar Bergman shot his most celebrated films. As the days pass by, the lines between fantasy and reality begin to blur, and the couple is torn apart.

Even though filmmaker Chris (Vicky Krieps) travelled to Fårö Island to get the inspiration to write her latest film, she is struggling with writer’s block. This place, famously known as Ingmar Bergman’s island because of its significance in the Swedish filmmaker’s movies and private life, is now seen as a safe haven for artists that use it as a way to explore their ideas and create new pieces of art.

It seems that Tony (Tim Roth), Chris’s partner and fellow filmmaker, has found its secret. While he thrives writing his latest oeuvre, giving masterclasses around the place, and getting never-ending compliments from fans, Chris can’t go past her outline. “I’m afraid that it’s like stuff already done,” Chris tells Tony during one of her outbursts, “We spend all our lives saying the same thing.” The key, Tony says, is the perspective of who says it.

This snippet of dialogue is also the key to appreciate Mia Hansen-Løve’s filmography, one that is focused on the ordinary and the simplicity of life, and yet provokes strong reactions. In Goodbye First Love (2011), she made us suffer the despair of the first heartbreak, in Eden (2014), the uncertainty of following our passions, and in Father of My Children (2009), the suffocation of depression. Now, in Bergman Island, her most personal film to date, Hansen-Løve offers a peek into the tortured mind of an artist and the secrets and restlessness that live inside of her.

Bergman Island starts with Chris and Tony arriving at Fårö island, a secluded peninsula in Sweden that is an odyssey to arrive to. Nevertheless, the pay-off is immediate: these filmmakers start experiencing the life and context that inspired the mind behind works of art such as Through a Glass Darkly (1961), Persona (1966), and Scenes from a Marriage (1973). Being there inspires Chris to deal with Bergman’s dichotomy as an artist, man, and parent.

How is it possible that such a beautiful place – surrounded by evident peace and simplicity – could be the setting for the tortured stories created by Bergman? Could a family man have created such a body of work or is it justifiable that Bergman neglected his nine children in the name of his art? These questions follow Chris around as she faces her own inability to write. As she struggles, Tony flourishes.

While the story seems simple – just as with other Mia Hansen-Løve films – the depth of its complexity resides in the discreet changes in the looks, unspoken interactions, and reveries shared by Chris and Tony. They arrived happily to the island, but soon they start to drift apart as they find themselves in opposite sides of the creative process. In this meta-story, it is impossible not to think about Mia Hansen-Løve’s life and the way Chris and Tony reflect her own past relationship with French director, Olivier Assayas.

Divided in two storylines, Bergman Island is mysterious and hard to define. Its freedom and rejection to an easy characterization allows for the formulation of theories and subjective interpretations. Just as with Bergman’s films, this movie can be interpreted in different and contrasting ways. The possibilities are endless and any one of them can be satisfying.

Sometime in the middle, a second love story is presented: Amy (a heart-breaking Mia Wasikowska) and Joseph (an irresistibly unreadable Anders Danielsen Lie), two ex-lovers, reunite for a friend’s wedding in Fårö island. With a physical appearance and background that are eerie similar to Chris (and consequently to Mia Hansen-Løve), Amy gets entangled in a love affair with the man that broke her heart years before (this section could easily be a Goodbye, First Love sequel).

How are these two stories connected? It is for the audience to discover it and create its own conclusions. Are we seeing the present, the past or the future? What is fantasy and reality? Hansen-Løve leaves everything open to interpretation. In this regard, and considering how meta and philosophical the film is, Bergman Island flirts with Persona’s complexity and Clouds of Sils Maria’s existentialism.

Such a dense-but-disguised-as-a-simple story is highly digestible because of its technical mastery. Mia Hansen-Løve makes it look simple and natural, proving her wisdom and sensibility. The peaceful and dreamlike landscapes contrast with the torment of the lost artist. The friendly sounds contrast with Chris’s creative turmoil and Amy’s shattered illusions. Just because something looks peaceful and beautiful, it doesn’t mean that it can’t be shattering and tumultuous.

Bergman Island is the recognition of a bigger than life artist by a fellow writer; it is the examination of the creative process; and it is the use of art as a way of emotional expression. Is it valid to use past experiences to create a fictional story? Is it okay to say something that you could never say to your partner through the safety of fiction? In this story, Chris finds solace in Fårö island, but also in the writing process itself. The exact thing that causes her pain is also the one that sets her free.

Deeply personal, but ambiguous enough to offer comfort to the audience, Bergman Island is equally inventive as it is mundane. It invites us to dive into our past, fantasies, and plans to explore our buried emotions. While it is accompanied by the playful rhythm of ABBA’s The Winner Takes It All or Tina Charles’s I Love to Love it slowly breaks your heart by setting loose the freedom of your imagination.