Patton: The General That Helped Win A War And Seven Oscars 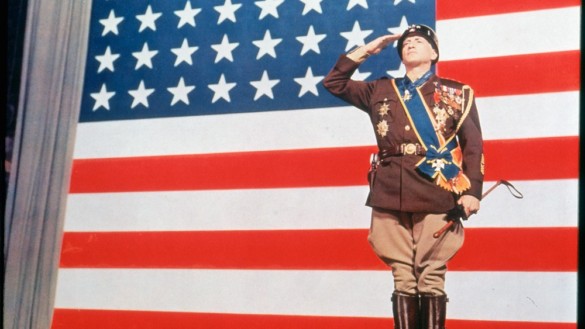 It is the 50th anniversary of an amazing biopic of a legend in war, leadership, and cantankerous behavior. With the story of General George S. Patton, leader of the Seventh Army in North Africa and Italy and of the Third Army in France and Germany, it was hard to not make his life into a movie. With the stellar George C. Scott in the titular role and Karl Malden as General Omar Bradley, director Franklin J. Schaffner cultivated the iconic character of a man who was larger than life and made his views and ambition so obvious that even the Army thought he was too much. All one has to do is watch the opening monologue of him standing in front of a massive American flag and give his legendary speech to the Third Army in 1944 before the invasion of France.

The script was written by Edmund North and Francis Ford Coppola, the latter who was about to shoot The Godfather, but Paramount had little faith in him until he and North won the Oscar for Best Original Screenplay. Patton’s family declined to help, so the script was written from multiple books about Patton, including a biography from Gen. Omar Bradley, who was still alive and consulted with the production. Some who knew Patton argued that Bradley’s input made Patton look too cartoonish (the two Generals disliked each other) and that it was a character study more than a true biopic. Most of the film was shot in Spain with some location shooting in England, Morrocco, and Belgium.

Compared to other World War II films, it is about the person and not the action upfront. It’s about the moments of genius, such as his march up from Sicily to the mainland, being the first to get to the key city of Messina, which is portrayed as a race of which side would get there first. It’s also about moments of madness, such as him slapping shell shocked soldiers which Patton considered as being cowards instead. Patton was stubborn and profane, not afraid to tell off someone as he does in the scene by calling his Soviet counterparts, “sons of bitches.” Ego is very much high in how Patton is portrayed like a wild cowboy who believed only he could muster the support for a full tackle of the Nazi plan, such as his leadership in The Battle of the Bulge. And George C. Scott could not have made it more articulate as, “Old Blood and Guts.”

It was no surprise it won 7 of its 10 Oscar nominations, including Picture, Director, Actor, and Original Screenplay. It was also no surprise that George C. Scott turned down his Oscar, having once declined his nomination for The Hustler. He stated that he hated the voting process and how studios advertised to voters, in which Scott described it as, “a goddamn meat parade.” He was in New York shooting The Hospital with his wife and watched a hockey game rather than the Oscar telecast and the Oscar was accepted by Director Schaffner. Where the statue is, no one knows. It’s possible with his estate, but it also could be with the George C. Marshall Foundation, which was given the Best Picture statue weeks after winning. But Scott would return to play the General in The Last Days of Patton in 1986, which focused on his last weeks alive following the car accident in which he suffered injuries that would be fatal.

It’s still a massively impressive film and one that raises the stature of the great General Patton and his Army. He is one of the most controversial figures in American military history but remains an icon for his defense of his men and his tenacity to boost morale for the push. Even if he rubbed people the wrong way with his vocabulary and temper, Patton’s story has been memorialized by the film and cemented George C. Scott’s status as a true American acting ace of his generation.