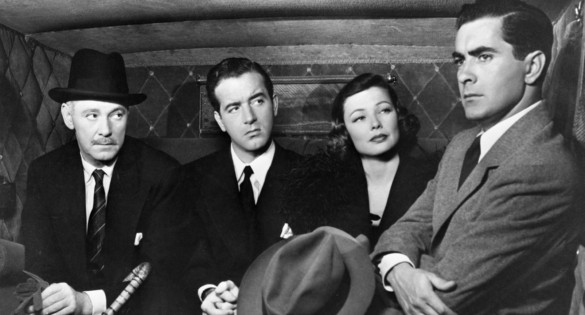 As a fifteen-year-old, I decided to read the novel The Razor’s Edge. It was published in 1944 and it was written by some guy called W. Somerset Maugham who looked awfully serious based on the images I had seen of him. At the time I was obsessed with seeming mature and wise beyond my years in an effort to get adults to take me seriously. I thought that reading classic novels would make me look like an intellectual so I used to sit around the house trying to comprehend what words like “Termagant” and “Demonym” meant. In all honesty, I didn’t have a lightbulb moment where I suddenly understood what Maugham was trying to touch on with his dark story of an enlightened young man trying to break away from two troubled women. However, reading this book did arouse my interest in the Tyrone Power film that was based on the novel.

A few years later when I became a major cinephile I suddenly became invested in Maugham’s works again as I watched films like The Razor’s Edge (1946), Being Julia (2004), The Painted Veil (2006) and Of Human Bondage (1934). I found films so much more digestible than the dense, complex novels of Maugham and I started to pick up on some of the recurring themes in his work. He loved focusing on devious women who take advantage of gullible men and he had a strong interest in people who could never quite find a place in the world no matter how hard they tried. As I watched his films I read reviews of them and I started to notice the fact that they were often criticized for not capturing the brilliance of his work. This encouraged me to go back and read books like Theatre and The Razor’s Edge which had previously seemed un-engaging. In doing this I did notice the ways in which Hollywood screenwriters had butchered a lot of the stories he wrote and I began to get angry at the fact that they had failed to bring the magic of the characters he wrote about to life.

The Razor’s Edge remains the most popular out of all of the adaptations of Maugham’s work as it was released just two years after the novel hit shelves and it was a massive box office hit as it became the sixth highest-grossing film of 1946. Of course, there had been many adaptations of Maugham’s work at this point but it does seem odd that producers thought they could take his cynical, anti-war novel about a group of self-involved, cruel people tearing one another apart and turn it into a traditional prestige picture. The novel concerns Larry Darrell, a young idealist, who returns from World War I as a changed man who turns away from the materialism of the people around him. He searches for some sense of meaning or purpose in life and finds himself attracted to Eastern philosophies and religions. His new beliefs jeopardize his relationship with the wealthy Isabel Bradley who loves him while being unwilling to give up her wealth and social position to be with him. She ends up sad and unhappy when she marries another man and watches as Darrell becomes involved with the alcoholic Sophie MacDonald who lost her family in a horrific accident. MacDonald ends up dying after spending several years living a hedonistic lifestyle but Bradley is partially responsible for her death as she had pushed her to return to her old habits. Bradley eventually admits her wrongdoings to Darrell who leaves her alone and miserable. When you think of popular films from the mid-1940s your mind probably goes to light, easily digestible family entertainment like Going My Way (1944) so it seems wild that a story this bleak fared so well with post-war audiences.

The success of the novel is perhaps less surprising as Maugham was a big name by 1944 and readers knew what they were getting themselves into with one of his books. He liked to focus on troubled people who torture themselves by not giving into their desires before sublimating them by hurting other people. In 1945 the rights to the novel were bought by 20th Century Fox for $50,000 and he also received a 20% share of the film’s net profits. The film adaptation soon became a massive production and it was made in the hopes of producing a surefire awards contender. Producer Darryl F. Zanuck was still licking his wounds after Wilson (1944) failed to win Best Picture as well as being a resounding commercial flop and he wanted his studio to finally have its moment in the sun. All of the elements of a Best Picture contender seemed to be there as the film was adapted from a critically well-received and popular novel as well as offering actors the opportunity to play alcoholics and morally pure men who do the right thing 100% of the time. All of this made the film a highly lucrative prospect but the Hays Code did exist in 1946 and it was being strictly enforced so elements of the controversial novel would have to be changed. 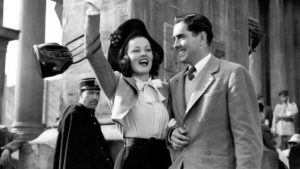 We do not know what the conversations between the censors working for the PCA and the screenwriters and producers were like but we can make assumptions. I assume the MacDonald character was a big sticking point with producers as she goes from being a wholesome, sweet young wife and mother to being a raging alcoholic who hangs out with unsavory figures. In the novel, we get more of a sense of how her difficult lifestyle is impacting her as she can’t bring herself to stop drinking and openly has sex with strangers who can offer her money. In the film, we know that she’s ‘bad’ but we don’t get any specific details. She has a drinking problem but she is never really allowed to articulate why she is drinking and her condition seems to come and go when the script requires it. Her closeness with some shady men is also downplayed in favor of having her stare up at the heroic Darrell with stars in her eyes. She seems like a flibbertigibbet with a minor drinking problem rather than a full-blown, miserable alcoholic who wants to drown out her suffering by living a hedonistic lifestyle. We also don’t get to see much of the relationship between Bradley and Darrell. In the novel, Bradley is far more open about her desire to have a sexual affair with Darrell and she brazenly throws herself at him but in the film, we mostly get her snarling when Darrell looks at other women. Some would argue that this was an attempt at subtlety but I would say that it was an effort to avoid accusations of endorsing infidelity.

There are other ways in which Zanuck seems to have compromised Maugham’s vision as he tries to turn the relationship between Bradley and Darrell into something more traditionally romantic. She comes across as a conniving but self-destructive woman in the book as she can’t quite let go of the trappings of her upper-class life but she is deeply depressed whenever Darrell isn’t around. Her attempts to get through to him have an air of desperation about them so we are sympathetic towards her but we also sense the fact that her love for him is unhealthy. She can’t handle the fact that he could love anything other than her so she wants to destroy the things that bring him comfort in life. Her actions are often irrational and she grows increasingly mad as the plot moves along. In the film, she is softened as she comes across as logical and honest when she asks Darrell to give up on his newfound spiritual beliefs so he can settle down with her and live an empty life with other rich people. She is played by the famously gorgeous Gene Tierney who is lit to the heavens in most scenes and she seems rather angelic when she really should have an obvious mean streak. Maybe this forced romance made it easier to sell the film to audience members but in softening Bradley so much I think the story loses some of its bite.

In the third act, we do start to see the disturbing elements of the novel being explored as a switch flips and Bradley starts trying to tear down her former friend. She turns into the bitch she should have been for most of the film and starts cruelly taunting MacDonald. The scenes they share do work in their own way as Tierney is convincing as somebody who enjoys wreaking havoc on people’s lives and the devilish glint in her eyes as she pushes MacDonald to drink again is unmissable. At the same time, I felt like this scene did not have the power it could have possessed. If the script had been able to develop Bradley’s growing resentment for MacDonald this scene would have had so much more power behind it. If there had been an earlier scene in which we see Bradley fully losing sympathy for MacDonald and turning her into a romantic rival it would have been much easier to track her journey. As it is I think the film expects us to do a lot of the work ourselves in the lead-up to this scene as we see Bradley shoot a few nasty looks at MacDonald but don’t fully understand the degree to which she hates this woman. 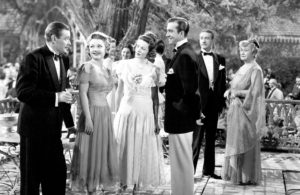 All of these changes mean that you don’t get to feel any of the visceral power of Maugham’s novel. I did find myself gasping on page 302 of the novel when Bradley starts to beg Darrell to run away with her because of all the horrors that had preceded that moment. In the film, we get a similar scene but it does not hit as hard because we can’t see why Bradley is so obsessed with this man and we don’t get why he is so freaked out by her proposal. She seems like a nice, sheltered young woman who made a big mistake once before reverting back to being normal and he doesn’t really seem to be affronted by the fact that she was involved in his wife’s death. Scenes do not flow into one another naturally and there is always the feeling that everything has been sanitized. When characters enter a bar that probably doubles as a brothel it doesn’t look very dirty and the mise-en-scène consists of a few bottles of beer that roll across the floor. Nothing about the film feels as risky and daring as the book and when we do get big, dramatic scenes they have no weight behind them so they fall flat.

With all of that said I am still fascinated by the 1980s remake of this film which starred Bill Murray. It received negative reviews and most of my friends have told me that it is not very good but I still hold out hope. I want to believe that somebody could make the writing of Maugham work on screen and with an actor as talented as Murray you would think that anything was possible. There were also less restrictions on filmmakers in the 1980s so I assume the bars that MacDonald enters will be filled with drunken louts and a few half-naked women who might just be prostitutes. Perhaps Maugham was just too brilliant for any screenwriter or director to understand him but fans like myself still think that there might be a perfect adaptation of one of his novels somewhere out there.