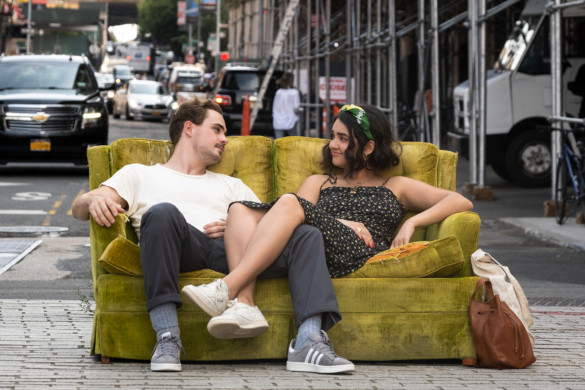 Synopsis: After a break-up, a young woman decides to start a gallery where people can leave trinkets from past relationships.

This year has been tough in general for movie releases, but the past month has been a weird one in particular. While the films we are getting now are of excellent quality, they are also mind-benders and require me to concentrate and go back to figure out what on earth I was watching. With bulky watches such as Tenet and I’m Thinking of Ending Things coming out in the past month, my brain needed a break, and I simply wanted an enjoyable and fun watch. This is when The Broken Hearts Gallery presented itself to me.

I would say that while I had a phase of loving the teen rom-coms (particularly during the time of The Fault in Our Stars), recently, I have found it tougher to get into them. Sure, there are a few gems such as Long Shot, but the type of rom-com that I like are the ones that feel fresh and take a different spin on the genre. While The Broken Hearts Gallery can fall into the tropes, it still feels refreshing and new to the genre as a whole.

What makes the film feel refreshing within the genre of the rom-com is that the central premise of the film isn’t about entering a relationship (although that is a feature of the film for sure) but dealing with the heartbreak of ending one. These romantic movies make the idea of love seem so perfect, and yet rarely is that ever the case. The idea of holding onto the past, either as a memory or as a sign that things may work out again, and that we need to let go and live in the moment is a tremendous and empowering message to anyone.

This is a film that is built around the premise of a young girl meeting a guy that just so happens to be building a hotel and has space for her to host some items as a gallery. It does feel a little fantastical and unrealistic. However, it is how the world is written in the modern world and how the story flows that things start to fit into place. It could seem unrealistic that her gallery would be able to take off, but in a world of social media, the pathway is there.

What also helps grounds the world and story are the characters, who are a bit insane and stereotypical but done in such a loving and caring manner. This is Geraldine Viswanathan’s movie, and she is captivating as the lead, Lucy. You feel every emotion that she is going through, and she makes the character come across as someone we would want to be friends with. She also has a great group of friends that she is surrounded with, written in a manner that feels empowering rather than destructive or bratty. A stand out for me has to go to Phillipa Soo, who I adored in the filmed production of Hamilton: The Musical and is equally as great here.

For a film like this to work, you have to care about the relationship between the main couple. The chemistry between Viswanathan’s Lucy and Dacre Montgomery’s Nick is so charming here, and what I appreciate is that there was a slow build-up to their story. It was not the case that they immediately saw themselves as romantic partners or that their goal was to get in a relationship together, but that their connection felt natural, and their love felt real through it all. The other thing I appreciated with how love was handled in this film was that love was not merely just romantic or between straight people. This film shows lesbian relationships and the love between friends, showing strength in all types of love, and that caring for others is essential, no matter how you show them or what their connections are.

This film may appear all cutesy and straightforward in presentation, but there is something a little bit darker and more serious than the film slowly builds up to. It is not only developed as to why certain characters act a particular way, but also adds meaning and passion behind the project and narrative of the film. While I will not even hint at what this moment or narrative is due to spoilers and wanting you to find out in the film, I appreciate Natalie Krinsky for writing this in and adding this weight and power to what could have been a fun and cute rom-com.

Whether it has just been a challenging and miserable year that has made me feel down, I was in dire need of a film like The Broken Hearts Gallery. Do I think that those who dislike the genre will be changed of their opinion with this? Probably not. However, I found the premise to be smart, the message to be empowering, and the performances to be captivating. If you are a need of a pick-me-up, this may just work for you like it did for me.