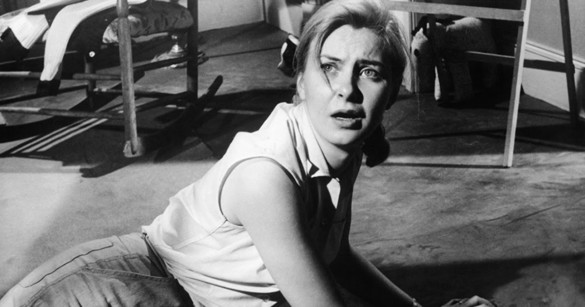 I simply adore the incredibly talented Joanne Woodward who was most popular as a movie star in the late 1950s and early 1960s. She often lamented the fact that she didn’t become a bigger star but I’m glad that she never got boxed in by the limitations of stardom as she had the freedom to appear in gritty independent films later in her career rather than settling into grande dame mode. In the minds of many, she is closely associated with her husband Paul Newman and the two did collaborate many times as he directed her to great success but their collaborations served as one phase of her long career rather than defining it. She was first and foremost a dramatic actress who appeared in serious films that weren’t necessarily made to satisfy the urges of mainstream audiences. Because of this she became prestigious in her own way and ended up earning four Academy Award nominations which cemented her status as one of the great talents of her generation. I wanted to discuss her first nominated performance which boosted her reputation as well as providing her with her only win.

In 1957 Woodward had only made two films and wasn’t necessarily a big name in the industry as Count Three and Pray (1955) and A Kiss Before Dying (1956) failed to make a major dent at the box office. She was a blonde beauty like so many other starlets at the time and looked like she was going to be permanently slotted into girlfriend roles alongside dependable leading men like Robert Wagner. She got her big break when she was cast in The Three Faces of Eve which offered her a juicy leading role. It concerned the life of housewife Eve White who suffers from multiple personality disorders and needs the help of a psychiatrist to return to acting normally. This was the sort of role that allowed an actress to go big and display a lot of mannerisms displayed during hours of practice. In other words, this was the sort of role that the Academy loved to reward actresses for as they had already recognized Joan Crawford in Possessed (1947) and Olivia de Havilland in The Snake Pit (1948).

Upon release, the film was a decent moneymaker but Woodward’s star power did hold it back and it did not become a hit on the scale of the salacious soap opera Peyton Place (1957) which featured top leading lady Lana Turner. Reviews for the film as a whole were also mixed as it’s depiction of psychology was described as “Easy and pat” by Variety. Despite this, Woodward’s performance was universally acclaimed and reviewers heaped praise on her as Bosley Crowther of the New York Times noted the fact that she played her role with “Superlative flexibility and emotional power.” Such glowing praise was rare in the 1950s and with her juicy role and the incredible commendation she received she was thrust into the awards conversation. At this point in time, I can’t help but feel that producers and her contemporaries within the industry thought that she would have a very different career. She was a young, gorgeous ingenue and she was winning awards in a decade in which Audrey Hepburn had both gone on to play glamour girls after winning awards for their star-making roles. This means that them rewarding her makes more sense as they thought that she would appear in mainstream blockbusters that would earn them money rather than turning towards independent cinema. 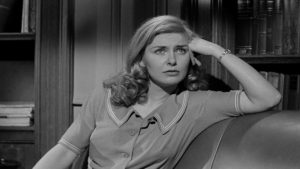 I also suspect that she might not have won if the field of potential nominees in 1957 had not been so weak. She was joined by Turner, a legendary sex symbol, who anchored Peyton Place and turned it into a success by playing the frigid mother who allowed audience members to assuage their guilt for being excited by lurid material. The nomination feels like a career achievement acknowledgment as Turner had been a reliable star since the late 1930s without receiving a nomination and Peyton Place proved to be unusually popular with the acting branch of the Academy as it picked up five acting nominations in total. She wasn’t necessarily taken seriously as she was seen as a movie star more than being a serious actress and the Academy does have a bizarre prejudice against them. Because of this she likely didn’t come close to winning as she was just a sex symbol in the eyes of those who chose to place an arbitrary distinction between movie stars and actresses. The other nominee who didn’t have a chance in hell at winning was Anna Magnani who appeared in the romantic melodrama Wild Is the Wind (1957). She built up her reputation with her work in the films of Roberto Rossellini before making a big splash in the United States with The Rose Tattoo (1955) which earned her the Academy Award for Best Actress. She was disadvantaged by the fact that she had already won just two years prior but she also refused to do press to promote the film and her performance and this made it difficult to mount a campaign in favor of her.

Woodward’s biggest competitors were Elizabeth Taylor and Deborah Kerr. Taylor appeared in the ridiculously long Gone with the Wind (1939) rip-off Raintree County (1957) which went through a tumultuous production and didn’t end up earning money because it’s budget was so high. Her nomination and the buzz that built around her had more to do with the fact that she hadn’t been nominated yet even though she had starred in several award-winning films. She made her film debut in National Velvet (1944) which earned Anne Revere the Best Supporting Actress award and from there she appeared in Best Picture nominees like Father of the Bride (1950), A Place in the Sun (1951), and Giant (1956). She still hadn’t been recognized by 1957 and despite the fact that Raintree Country wasn’t a hit with the critics her popularity with audiences and the sense that she was overdue put her in the conversation. Kerr had a similar narrative in some ways as she had been nominated three times before 1957 and was likely the runner up in both 1953 and 1956. With her role in Heaven Knows, Mr. Allison (1957) she continued her run of playing noble British ladies who struggle with temptation in the face of roguish men. This time she even played a nun who refuses to engage in an affair with a randy Robert Mitchum and in an era in which the Academy was particularly puritanical the nature of the role she played probably helped her chances. Unlike Turner, it was also easy for Kerr to be taken seriously as she had a background in British arthouse cinema and played the sort of virtuous, respectable women that the Academy admired. Reviews for Kerr and Taylor were not as good as the reviews for Woodward but they were seen as serious contenders to win the award.

Woodward did become the frontrunner however as she won both the National Board of Review award and the Golden Globe award for Best Actress as well as being nominated for the BAFTA. It appeared that critical praise and her ingenue appeal were enough to net her the prize and she attended the ceremony with Newman. It was a triumphant moment for her and it did put her on track to become one of the most respected talents of her generation but I have to admit that I don’t love her performance. It feels like it is a purely technical piece of work and I always felt like I was watching somebody ticking boxes in their mind as there was something completely cold about Woodward here. Her character has to cry out for help at several points as well as slowly finding her voice as the film goes on but I didn’t feel like I was seeing concern and self-doubt on her face. Every beat in her performance felt like it had been predetermined and even though her character is meant to be losing control I always felt like Woodward was firmly in control of everything that happened. She loosened up later on in her career and turned into somebody who could create the illusion of not acting even when she was handling big, emotional scenes. At this point in her career, she hadn’t quite put it all together yet but I am glad that she received an Academy Award at least once in her career and I would be burning with rage if she had never been rewarded for her work.