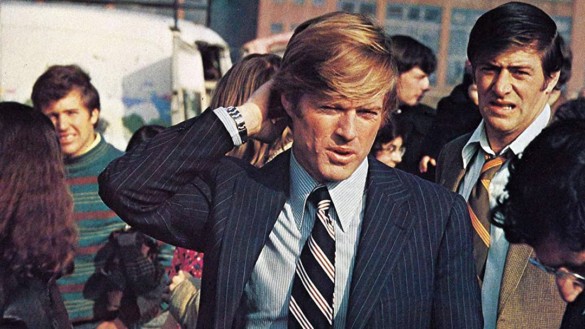 Shortly after I watched The Candidate for the second time in a month, I watched the final presidential debate between Joe Biden and Donald Trump. Though the debate in the film is certainly more watchable than the debates we’re witnessing in reality, it’s difficult not to notice some similarities. A film that poked fun at the political machine in 1972 feels scarily relevant now, right down to some of the issues that are addressed.

The Candidate, directed by Michael Ritchie, begins with the Republican primary for a U.S. senator race in California. The victor is the incumbent, Crocker Jarmon (Don Porter), a long-time holder of the position. His eventual victory in the general election is such an afterthought that there is not a single Democrat in the state willing to run against him. However, there is one person who sees the situation as an exciting opportunity. That person is Marvin Lucas (Peter Boyle), a campaign manager associated with the recently defeated challenger.

While Lucas does not expect to lead anybody to a victory in the election, he uses the circumstances to reach out to an old college friend, and our protagonist, Bill McKay (Robert Redford). McKay leads a low-key life as a small-time lawyer, but his father (Melvyn Douglas) was the state’s governor back in the day. Lucas thinks he can run a campaign that will shake up the system with McKay. Of course, the first step is getting McKay to agree to the proposition, which Lucas does by ensuring that there is no way McKay can win the election. McKay can say anything he wants to on the campaign trail, sticking to the beliefs he holds without being influenced by a campaign geared to win at all costs. There’s also a guarantee that McKay’s father will not be brought into the process.

On the surface, the idea of a famous son with no political experience whatsoever running for a major office may draw comparisons to the current sitting president. But McKay seemingly has no interest in the power that comes with being elected. In fact, he’s not even registered with a party. The campaign begins with his displays of pure honesty in his convictions. He leaves no doubt that he is pro-choice, believes in the expansion of welfare programs, and focuses his efforts on the working class. Even more surprising, when he does not know the answer to a question directed at him, he simply replies with, “I don’t know.” In short, he’s not a politician, and Redford brings immediate charm and charisma to the instantly likable character.

Of course, this all changes very quickly. The real strength of the film lies in how effectively it displays the machinations of the American political system. The film was marketed and released as a satire, indicated by tongue-in-cheek humor, overly patriotic music, and a poster that featured Redford blowing a bubble of pink gum in front of the U.S. flag. But the Oscar-winning screenplay was written by Jeremy Larner, who was an actual speechwriter at the time. As a result, the film is infused with a sense of realism in the way it displays the manipulation of McKay, and the voters, by his campaign team. Michael Ritchie also shoots the film like a documentary, including overlapping dialogue reminiscent of an Altman film. The gritty authenticity of the style adds to the real-life implications of the script.

Almost immediately, the campaign McKay is involved with becomes much different than the one he signed up for. He goes from humble interviews in his office to TV ads, publicity shoots, and coaching from a team of writers on how to answer interview questions in the future. Before we know it, he looks like a real contender in the race. As expected, this results in McKay’s very left-leaning agenda moving closer and closer to the center in an attempt to attract sponsors and weary voters.

Throughout all of this, McKay rarely displays strong opposition to the direction of the campaign. We can see how uncomfortable he is with some of the decisions being made, but his protests are fairly small. In some ways, this may come off as one of the few flaws of the film. The character that easily gives in to the domination of his political ideals by the likes of his own campaign manager seems like a far cry from the headstrong person we’re first introduced to. Granted, Peter Boyle’s performance as that manager is as thoroughly convincing as the character himself. And the film resolves this issue in Redford’s character by capturing the dizzying pace of the campaign trail and honing in on other aspects of McKay’s life.

Though the film is largely an exploration of a singular venture in American politics, it’s also a very personal character study of McKay himself. It’s not just that he is a victim to a system that gobbled up his forward-thinking ideas for the sake of being competitive. The campaign also takes a strain on his marriage, leading to a confrontation with his wife (Karen Carlson) about how they have abandoned who they truly are for the cameras and papers. He is also eventually forced to bring his father into the fold, leading to an uncomfortable reunion that hints at a distressing past between the two. Redford’s affecting performance never allows us to forget that this is an actual human being, not just a face in a TV spot.

Still, the most appealing aspect of the film is the changes that come about because of the political gambit and the prospect of winning. As we near the end of a tumultuous election cycle in 2020, perhaps the most relatable aspect of the film is its portrayal of just how performative major American politics are. This is apparent in the final act of the film, as the two candidates take part in a televised debate. McKay’s advisors nod and smile in approval as he follows the script prepared beforehand. They writhe in pain during the moment when McKay goes off-script to lay out his true concerns. It makes it clear that such political ventures are not about saying what you believe, but rather what you need to say to win the power that comes with the office. At its center, this film is about the extreme desire to win at all costs. That’s obviously true for Boyle’s sketchy campaign manager, but some moments make us wonder if it’s also become true for McKay.

The Candidate is both securely of its time while also featuring parallels to the performative aspects of the political system we continue to see today. Let it be made clear that this film should not be used to interpret the nuances this election cycle. Though it can make one question how they feel about American politics and how little they have changed throughout the years. Then again, I’m not sure what’s scarier: how minuscule those changes are, or the line that Redford delivers at the conclusion of the election: “What do we do now?”