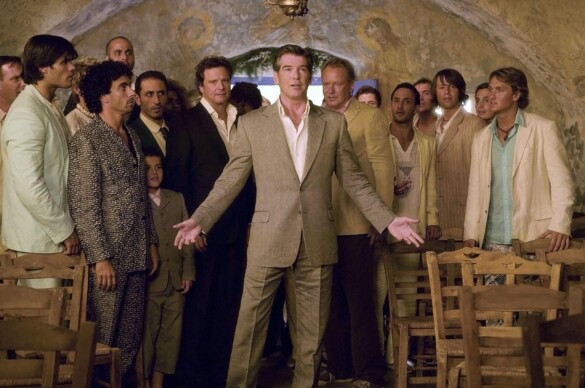 Like his tenure as 007, there are a few ho hum and uneven pictures in Pierce Brosnan’s extensive repertoire. Here’s an eclectic variety of Brosnan sans Bond – ranked from good to bad.

Unbeknownst to her mother, Meryl Streep (Kramer vs Kramer), Amanda Seyfried (Jennifer’s Body) invites her three prospective fathers to her Greek wedding in this pleasant 2008 ABBA infused romp. From “Dancing Queen” and the eponymous track to superb Greek locales and coastal spectacles, the adult fun and musical maturity remains witty and sardonic thanks to the elder ensemble. The script from playwright Catherine Johnson is thin and obvious at times – especially in the obligatory father bonding montages or blatant cues for the music – and the pace drags between set numbers. However, director Phyllida Lloyd (The Iron Lady) doesn’t wallow in the young love tug and pull. Instead, each cast member receives a scene stealing musical moment – including saucy Christine Baranski (Chicago) with “Does Your Mother Know?,” catchy Julie Walters (Harry Potter) in “Take a Chance on Me,” and the impressive, high energy Streep for “The Winner Takes It All.” While perhaps unusual choices, Colin Firth (The King’s Speech) and Stellan Skarsgard (Pirates of the Caribbean) fit the winking tunes, but sadly, it’s Pierce Brosnan that doesn’t. As opposed to the charming will they or won’t they in the days of Remington Steele, Dear 007 is terribly out of place with his painful “SOS” rendition. Fortunately, it’s a jarring but bemusing piece of an otherwise delightful escapade for audiences young and old.

Eerie camerawork, stilted slow motion, music montages, and sinister punks date this 1986 Chelsea Quinn Yarbro supernatural adaptation from John McTiernan (De Hard) with a movie of the week feeling. Fortunately, frizzy perms, limp ladies bow ties, and French flavor set off the Los Angeles hospitals, violent patients, grimy vandals, and ominous dreams. Memories between strung out doctor Lesley-Ann Downe (North and South) and bearded anthropologist Pierce Brosnan blur amid black and white photographs, dark room splicing, and evil spirits that don’t appear in the developed frame. The intercutting between our avatar and the retraced action is well paced as erroneous reflections, possessions, gender reversals, and soul snatching pursuits mount. Granted, the desert spirits aren’t super menacing and the unique Inuit myths are unclear. However the cryptic history remains intriguing thanks to the concrete jungle threats, spooky nuns, and abandoned creepiness. These freaky, foreboding shapeshifters make us wonder how many more gangs and urban nomads there could be today. How often do we pass by seemingly but not so innocuous people without really noticing them? If you overlook the eighties over the top, this mature but no less bizarre ninety minutes is an atmospheric sociological study.

Jet setting apps, tricked out cars, and futuristic homes spell doom for Pierce Brosnan and Anna Friel (Timeline) in this 2016 thriller. We’re accustomed to the on screen graphics, text messages, and screens everywhere; however, New Wave pop, green lighting, and nightclub dens contrast the luxury closets, private aviation investors, and austere glass designs. Cyber thrillers were common in the 90s after home computer technology emerged, but intriguing conversations on technology versus privacy and what we must give away to obtain each are too brief. It’s nearly impossible today to stop using the internet or cell phones, but how do you draw the line when they allow a stranger to infiltrate your home? Nuisance sprinklers, lights, and music escalate to doctored paperwork, aircraft hacks, and compromised medical records. Unfortunately, the cliché emo hipster enemy is unnecessary because it would be more frightening for Dad Brosnan to not know the origin of this technological threat affecting his business, home, and family. Authorities never following up on the digital evidence, saucy teen shower videos filmed and distributed without consent are suddenly forgotten, and contrived conveniences hamper what should be a disturbingly timely premise. Going off the grid and stealing thumb drives become an undercover race to erase that simply runs out of steam instead of providing any real fear of subversive technology.

Butterfly on a Wheel

Meticulous Pierce Brosnan abducts the daughter of not so perfect couple Maria Bello (A History of Violence) and Gerard Butler (300) in this 2007 drama escalating from mundane errands to desperate crimes and deadly consequences. Unfortunately, we’ve seen these misdirections before, and the interwoven, increasingly preposterous plot cum terrorizing deceptions feel hollow. The betrayals focus on the calculated randomness, but the supposed secrets are obvious. The double talking isn’t coy, and all this control could have been achieved without such elaborate plans – leaving the kidnapping as a non-factor rather than the emotional core. Wise viewers will surmise Bello’s character arc despite the unbelievable motivational changes before her prolonged absence on screen undoes her role reversal. Butler’s cool salesman shows his limp fish true colors without all of Brosnan’s titular efforts, and those pretentious exaggerations stymie Brosnan’s subtle, sinister desperation. He has nothing to lose, which is disturbing and strangely understandable today, but weak plot points fizzle thanks to absent police, easy chances, and missed opportunities. We suspect what caused this orchestration all along but by the end viewers no longer care who’s lying to whom. Seemingly intelligent characters are made stupid as needed, and what could have been a taut revenge tale becomes predictable and unfulfilling.

Upstate rural settings, lakeside cabins, and onscreen writing dilemmas accent the enjoyable Brosnan, Annabeth Gish (The X-Files), and Melissa George (Triangle) in this ghostly 2011 Stephen King adaptation. Unfortunately, the overlong, confusing material wavers between endearing the audience and making us mistrust the scary dreams and unexplained prophetic connections. The slow pacing takes too long to get to the supernatural shenanigans and insipid shockers thanks to unnecessary establishing scenes. Jazz era indiscretions, curses, hauntings, and spirited appeasements have been done better elsewhere, and the derivative paranormal confrontations become laughable as ghosts toss records at people and a gnarly tree attacks 007. Ironically, these hokey elements make this entertaining to watch despite the yelling at the television frustrations over unanswered questions, convenient technology, and contrived clues. Instead of a straightforward mystery peppered with King references, the most memorable thing here is the bad.