Movie Review: ‘Sonic the Hedgehog 2’ Is Full of Fun and Heart 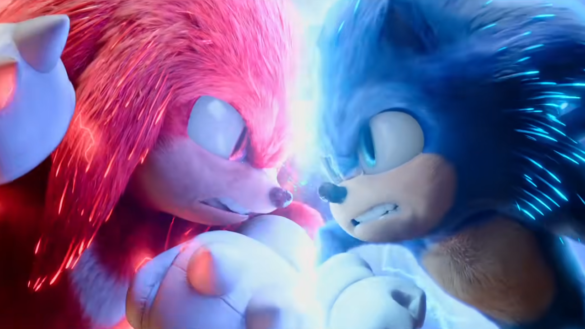 Synopsis: When the manic Dr. Robotnik returns to Earth with a new ally, Knuckles the Echidna, Sonic and his new friend Tails is all that stands in their way.

It’s likely the animators for Sonic the Hedgehog 2 spent their time working from home with printed out Twitter snark from the first reactions to the original concept of Sonic. They must have because the animation and the CGI effects for this film are truly fantastic. From the quills on Sonic himself to the fluffy looking fur on Tails to the gargantuan robot that Robotnik controls in the climax of the film, all of the graphics are superb and interact with the real elements in the film very well. With a film like this, one wonders why the filmmakers didn’t choose the completely animated route all along. There are now three CGI characters with a lot of robots and exotic locales to create, so it would have made more sense. Though, if they had, we wouldn’t have been treated to two of the film’s secret weapons.

The first of those secret weapons is Rachel (Natasha Rothwell). . She stole every scene in the first film and while she doesn’t have as much screen time here in the sequel, she is given some truly sensational moments. In one of the best scenes of the film, director Jeff Fowler and his cinematographer Brandon Trost give Rothwell the action star treatment. She cries out in anger at some government agents while speeding toward them in a golf cart. She nearly knocks them over, then hits the golf cart’s emergency brake. That’s when, in slow motion, Rachel turns the cart, steps out casually with a bottle of champagne, pops the cork and, as the golf cart impacts and shorts out some electrical equipment behind her, she takes a swig of the bottle and then tosses it aside. It’s a delightful homage and a cheerworthy moment.

The other secret weapon is of course, Jim Carrey as Robotnik. He was the standout of the first film, but here, he continues his delightfully unhinged persona with the addition of a completely new, impossible, and impossibly terrific mustache. Carrey uses his body in implausible, seemingly uncomfortable ways, and yet, he makes it look natural. Somehow, he plausibly plays his leg like a guitar. It’s been a while in a franchise tentpole to have a villain be unrepentantly and irredeemably evil. It’s so delicious to see Carrey sink his teeth into such terrifically villainous material. If only it were a better vehicle overall.

Sonic the Hedgehog 2 is a film written and produced with young audiences in mind. Though, even by those standards many of the jokes are tired and stale. There are elements that take place in the real world that do set up the larger world, but distract from the main plot. It still feels as if the writers are finding their footing in this world. They have all of the elements, the references, and the lore, but, to their detriment, they’re struggling to keep it accessible and appealing to more than just fans of the original video game franchise.

Where the film always succeeds are in the found family narrative and the superb action choreography. There’s a lot to like about Sonic the Hedgehog 2. Most of it is enough to make you ignore the poor jokes and just get lost in the world taking shape. It’s a sequel that does what a sequel is supposed to do, which is to further the story, but be a complete adventure on its own.