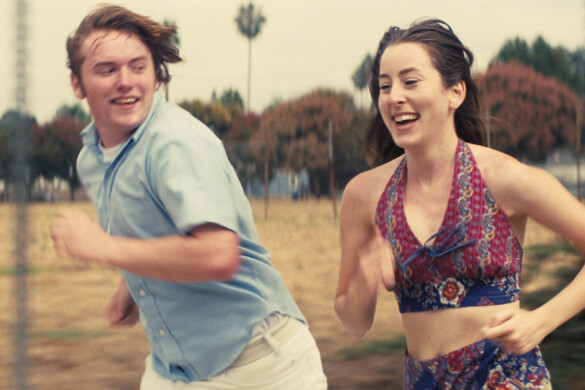 For as long as there has been a film industry, it has been a place where young women are pursued by older men. It’s far more obvious outside of the silent and black and white eras when now you can see in full color that the leading men get older and older and their co-stars get younger and younger. In the new film by Paul Thomas Anderson, there is a romantic relationship between a twenty-five year old woman and a fifteen year old boy. It’s unusual to say the least. When the internet got a hold of the information, a lot of people who have not and will not see the film have decided to have a vociferous opinion. They’re not wrong in the larger idea that adults should not date minors, yet they fail to see the nuance or the context of the relationship. Those that haven’t seen the film are lacking a perspective on the material and are assuming, as has happened in previous films, that the adult is the predator and the minor is the innocent babe in the woods.

Films have broached the idea of an adult romantically pursuing a minor, but it is almost always an older man seeking a girl. Vladimir Nabokov’s novel, Lolita, about a middle aged man longing for the teenage daughter of his landlord, has had two major adaptations. Woody Allen’s famed Manhattan has a plot that involves his middle aged author surrogate dating a teenage girl. Even the U.S. version of Leon: The Professional hints strongly at what the film’s international version makes more overt, that Leon has romantic feelings for his young ward, the not even teenaged, Matilda. There is a very big difference between these films and Licorice Pizza.

Gary, the fifteen year old, is very obviously imitating behavior he has seen in the charming men around him. He’s gotten the hint from the culture he consumes that confidence and persistence is what women like. He thinks it’s what they want from an interaction with a potential partner. However, he lacks the empathy to see how this behavior actually affects real women who are pursued this way. Gary lacks the teeth of a predator only because he’s often gotten what he wants because the women in his life know he’s not actually that man he pretends to be. He’s a scared, jealous little boy. Alana, the twenty-five year old, sees the boy behind the facade of the man.

Alana has those predatory adult men pursuing her, she knows them. Her boss spanks her as she walks by while they’re at work. A director and star of a movie she wants to act in leer at her during her screen test. Afterwards, the actor takes Alana for drinks, but ignores who she is in favor of his fantasy of her. An aggressive client of hers and Gary’s waterbed company leans over her and presses his body into hers under the guise of helping her to steer a large truck. While these men physically take advantage of Alana, Gary is never aggressive in that way and he cares for Alana the person more than Alana’s physical body.

It’s when Gary starts pressing for physical contact that Alana wonders if their friendship is worth it. If Gary touches her, he’s just like all the rest. If she gives into his entreaties for sex acts, then he will have the upper hand like all the men who are interested in her. If she lets him have her, then he will move on to his next conquest. He will become like all the rest. In her way, Alana is attempting to create a better human through denial and self assertion. Alana is molding Gary, spurring him, challenging him, testing his resolve to her. Yet, she never pushes him for anything. She never asserts herself over him. She does what she does so Gary can figure it out, so he can see who’s in front of him and not everyone else in his sight. She may not end up with Gary long term, but it feels as if she can make one less entitled lothario other women have to fend off.

The couple’s love is chaste. It isn’t sex driven, despite Gary’s urges and never at the urging of Alana, the adult in the relationship. Licorice Pizza is a coming of age for a woman who is stuck in a rut and a boy who has acted like a man before he actually had the emotional maturity to be an adult. This isn’t a film about lusting after young flesh. This isn’t predator and prey. Licorice Pizza is a film about two people who find something in one another that they can aspire to. Alana aspires to Gary’s grand ambitions, Gary aspires to have a partner like Alana in every sense of the word. It’s just that often their immaturity gets in the way of these goals. To dismiss Licorice Pizza based on the age difference and the romantic bent in the relationship between the two main characters is to be ignorant of the nuance of human entanglement.