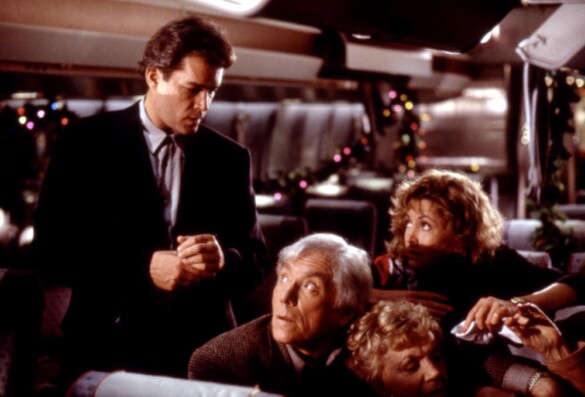 It was the year of Men in Black, Tomorrow Never Dies, and Titanic, but let’s just say 1997 started off with more of a whimper than a bang when it came to the newest event movies. The Relic was a decent creature feature released on January 10, 1997, a cheesy thrill ride that had the occasional good scare but wasn’t entirely memorable. And the other major film released that day is an almost entirely thrill-less fiasco, with two leads that lack chemistry and offer little originality to the proceedings. Starring Ray Liotta and Lauren Holly, Turbulence has a few entertaining moments that rank in the so-bad-it’s-good category, but overall the film’s narrative is just as messy and confusing today as it was twenty-five years ago.

A beloved subgenre in the 1990s by movie studios and apparently enough audiences was the claustrophobic airplane thriller, which often paired a giant star with a high-concept action plot set aboard a plane. Some examples include Wesley Snipes in Passenger 57, Kurt Russell in Executive Decision, and Harrison Ford in Air Force One. These movies could be made relatively cheaply compared to other major action films since most of the story was confined to one interior setting, and it gave audiences a chance to put themselves in the hero’s position, since most of us have been on planes and have never experienced a terrifying scenario up in the air at 40,000 feet.

Turbulence was one of the lesser films in the subgenre because the entire effort has a lack of imagination from its director and screenwriter, as well as an outrageously over-the-top performance by its lead Ray Liotta. The film marked Jonathan Brett’s only major screenplay credit (the spec script was purchased for a cool one million, so maybe he took the money and ran), and this was the final theatrical film by director Robert Butler, who got his start making middle-of-the-road Disney hokum like The Barefoot Executive, Scandalous John, and The Computer Wore Tennis Shoes. None of his earlier credits proved he could handle a high-intensity thriller like Turbulence, and so as the suspense should be growing in the film’s second half, the tension instead only ebbs and flows.

The film tells of an accused serial killer Ryan (Ray Liotta) who is transferred with another prisoner by airplane to Los Angeles to face trial. This 747 is nearly empty on Christmas Eve (as all planes are that night, am I right?), and when the other prisoner Stubbs (a deliciously creepy Brendan Gleeson) breaks free and begins a shootout with the marshals, all Hell breaks loose, most on board dying, leaving flight attendant Teri (Lauren Holly) one of the few left to go up against the deadly Ryan, not to mention land the plane.

The whole scenario is ridiculous, but with enough action and surprises and stellar performances, the film could have come off as passable entertainment. But there’s little to keep you interested in the story, large chunks of time dedicated to Ryan and Teri getting to know each other, and a conversation about her favorite movies going on forever.

The biggest problem of all is Ryan, with Liotta playing him as kind and helpful, to the point where Teri believes he might be innocent of all the crimes he was accused of, until a drastic shift is made and suddenly he’s a vengeful maniac murdering another flight attendant and coming after Teri. It’s as if he’s trying to duplicate the madness of Nicholson’s Jack Torrance in The Shining (there’s literally a scene where he tries to get inside the cockpit by swinging an axe into a door, only stopping when there’s enough of a chunk missing so he can peer through). I’m not sure how much Butler directed him, but he never seems to capture the right tone of the guy, coming across as goofy in the second half when he should instead be menacing and intimidating. We’re a long way off from Goodfellas here, that’s for sure.

Lauren Holly’s breakthrough was 1994’s Dumb and Dumber, and she rode that successful comedy’s coattails for a few years, appearing in major films like Sabrina and Any Given Sunday. Her two lead roles came in 1997, with Turbulence and another box office flop, A Smile Like Yours, co-starring Greg Kinnear. She was always better suited to quieter dramas like Beautiful Girls and not so much a high-octane thriller like Turbulence, sprinting down hallways with a bleeding forehead and searching frantically for a weapon to defend herself. She’s better than Liotta, her character at least consistent and competent and up to the task of saving the day, but there’s an unfortunate flatness to her character throughout that gives Holly little room to play.

I do like her Dirty Harry-like delivery at the end of the line, “I changed my mind,” and there’s fun to be had when she’s trying to land the plane and crashing into buildings, one of the wheels catching hold of a vehicle from an outdoor parking lot. This is still the era where many of the effects were done with models, not with CGI, and you can tell in this key sequence, when you’re able to forget about the dumb plot and lame dialogue and just enjoy the ride. I also enjoyed Gleeson’s performance in his limited amount of screen-time, playing the polar opposite of the noble retired detective Bill Hodges he would inhabit so gloriously twenty years later in the excellent series Mr. Mercedes.

Many critics at the time trashed Turbulence, Holly’s performance earned her a Razzie Award nomination, and most audiences stayed away, the film grossing a paltry eleven million on a fifty-five-million-dollar budget. I don’t think it’s that bad, as I’m a sucker for airplane thrillers even when they’re forced and tired like this one mostly is. The film might have flopped hard at the box office, but it did well enough on tape for two direct-to-video sequels to be greenlit—Turbulence 2: Fear of Flying and Turbulence 3: Heavy Metal.

I can’t imagine those movies offered anything better than the original, but at least there would be another action flick set on a plane coming later in 1997, and this one would actually be good. Yes, the better-than-average Air Force One was only a few months away.