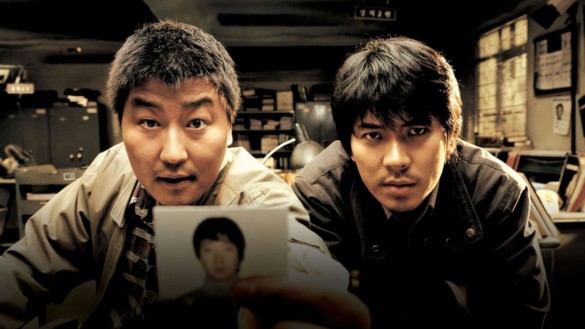 As we move into the Spring, it is time for a fresh new set of films from the Criterion Collection. For the month of April, two movies from Jean-Luc Godard and Anthony Mann have been given a fresh new release of previously installed films, while Bong Joon-ho and Olivier Assayas get another movie of theirs added. Plus, a hidden tale from Hollywood Golden Age is plucked out of obscurity for public recognition. Here’s the rundown on the April class from Criterion.

Frank Borzage’s romantic dramedy follows a married woman (Jean Arthur) who flees from her terrible husband (Colin Clive) and runs into a charming French headwaiter (Charles Boyer), who becomes unwittingly entangled in a cross-continent menage a trois with the woman’s husband, a millionaire. With the backdrop of a cruise liner that becomes the story’s motif, it is a passionate affair that, in justifiable fashion like the Titanic, it can be broken apart by an iceberg. It is one of Hollywood’s hidden unknowns despite a recognizable cast that can flip easily in tone but maintains its integrity in the fleeting moments of danger.

Anthony Mann’s Western was not successful financially upon its release, but its reputation has grown over time because it was not a traditional Western. Barbara Stanwyck plays the daughter of a cattle baron, played tyrannically well by Walter Huston in his final performance, who locks horns with her father for her right to own a piece of the estate, as well as her right to choose her husband. It’s a family drama that takes on symptoms of Shakespeare, Freud, and Dostoevsky as Stanwyck engineered to be hard-headed as her father, has to rebel from his iron-fisted ways to seek what is hers.

Godard mixed politics and comic frolic with this ode to revolutionary youth he describes as, “the children of Marx and Coca-Cola.” Starring Jean-Pierre Léaud and pop star Chantal Goya (from the yé-yé genre of the 60s), in the middle of a decade where the counterculture started to rise, a group of free-spirited people forming a ménage à quatre go around exploring the best of life in music, pop culture, sex, and political views being more radical at the time. Godard takes another experimental view of his own movie, inserting documentary, outside sub-plots, and sudden intertitles that break the rules of storytelling, but because it’s Godard, we’re not surprised and is still very watchable.

In one of his first movies, Olivier Assayas made his own behind-the-scenes calamity where the director (Jean-Pierre Léaud) doesn’t know what he wants and the egos of the crew make production hell. Meanwhile, the film’s leading lady (Maggie Cheung) is stuck wearing a latex catsuit while hiding and wondering about as a stranger in a foreign film industry that seems to make it worse on themselves. The disastrous production is Assayas’ way of self-reflection to what France’s film history has become without the notable figures being referenced who built the industry from scratch and now how it has all turned to crap.

Bong Joon-ho’s second film gave him noted recognition around the world with this brilliant crime drama lead by recurring collaborator Song Kang-ho as a police detective who struggles to solve a group of murders from one serial killer. The story is loosely based on a real-life serial killer who at the time hadn’t been captured and would only be arrested in 2019. But in its timeframe, the late-80s/early-90s, it is a masterful neo-noir that puts 2021s early dud The Little Things in the gutter. It is here that viewers who want to check out Bong’s early work can go with and pick up on that mastery, on how he tells the story scene-by-scene and how just remarkable Song Kang-ho is as an everyman in different films.