Movie Review (SXSW): ‘Tom Petty, Somewhere You Feel Free’ is a loving picture of a music genius creating his masterpiece 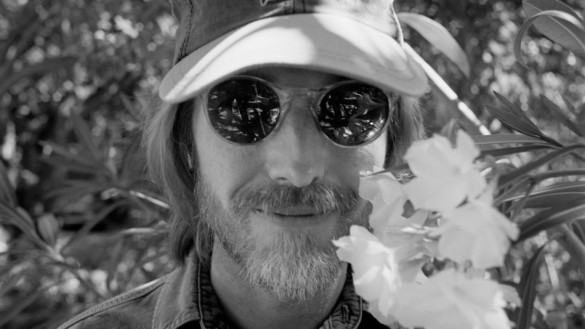 Synopsis: Drawn from a newly discovered archive of 16mm film showing Tom Petty at work on his 1994 record Wildflowers, considered by many to be his greatest album ever, Somewhere You Feel Free is an intimate view of a musical icon.

In 1994, legendary artist Tom Petty recorded Wildflowers, an album considered by many as his masterpiece. Tom Petty, Somewhere You Feel Free is the documentary that follows Petty and his collaborators through the recording process. Sometime in 2020, a collection of 16mm film – shot by Martyn Atkins between 1993 and 1995 – was recovered from the Tom Petty archive. This footage included the Wildflowers recording and the subsequent tour. Directed by filmmaker Mary Wharton, the feature presents unseen footage that works more as a love letter for the rock star and less as a comprehensive picture of the man behind the guitar and the harmonica.

The film merges old material with contemporary interviews, all tailored in the same 16mm style. We see the artists collaborating in the studio, while some of these people are presented almost thirty years later talking about their experience and about Petty himself. Rick Rubin (Wildflowers’ producer), as well as the Heartbreakers members that joined Petty in his solo effort – Mike Campbell, Ron Blair, Benmont Tench, and Steve Ferrone – reunite to reminiscence.

In this regard, it is hilarious that Petty wanted to create something separately from his band and finished recruiting three of the original Heartbreakers. For a little bit of drama, the documentary also presents a special interview with Stan Lynch, original Heartbreakers drummer, who exited the band right in the middle of these sessions because of clashes of personality with Petty.

This relationship is worthy of attention if only because it represents the exact opposite of what Petty seemed to treasure during the recording of Wildflowers. No fighting. No negotiating. Just a good environment in which artists came together and enjoyed playing and recording Petty’s songs. The film exposes over and over the positivity of the experience.

This is probably why the documentary is so enjoyable: it is a celebration of positive feelings and a loving peek into Petty’s creative process. Through the album’s lyricism and Petty’s enjoyment, Tom Petty, Somewhere You Feel Free inspires nostalgia (it hurts that he is no longer around) and stirs adoration for an artist that was a genius songwriter, bringing to life his intimate vision, while battling the pressures of fame, the lack of creative freedom with his former record company and the dissolution of his marriage.

The footage presented is casually insightful. Through jamming sessions, conversations, and scarce narrations by Petty, the audience can get a sense of the mood in the room and the creative process of those involved, with Petty in sole charge. The interviews turn out to be an important resource, although a subjectively adoring one. Nevertheless, these commentaries allow us to understand Petty’s mindset and mood.

The documentary offers a spotlight on each of the songs that made the final album (in one of the most frustrating extracts, Petty has to decide which songs will be left out because the studio refused to release a double album). We get to learn some special trivia about the songs and personal reasonings and experiences. Paper in the Wind and Wildflowers, for example, represent Petty’s feelings and personal quest for happiness and self-satisfaction as his marriage fell apart (“You belong among the wildflowers, You belong in a boat out at sea, You belong with your love on your arm, You belong somewhere you feel free”).

The documentary is not a fulfilling inspection of Petty’s life and career that spanned almost 50 years. It is specific and small in its scope. It is exclusively interested in inspecting a definitive project in a genius’s career, aided by the insights of those that knew him better and that were there during that pivotal time.

While we do not discover or understand Petty’s personality – he continues to be a mystery when the documentary is over – it awakens our curiosity and adoration for a man that seems to be going through an introspective moment, aided by a peaceful environment and a positive creative process.

This project turned out to be special because it found Petty trying to create something on his own and away from the “democratic process” that implied being part of Tom Petty and the Heartbreakers. Wildflowers would become one of the most successful Petty albums, and, according to him, the best record he ever made. The documentary reflects Tom Petty’s adoration for this time in his life consequently, transmitting a happy atmosphere through the screen. Wharton’s delicacy and sensibility allow the audience to testify a moment of creative bliss.