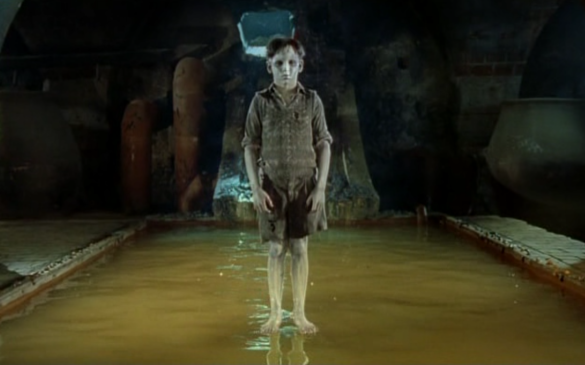 Synopsis: After Carlos, a 12-year-old whose father has died in the Spanish Civil War, arrives at an ominous boy’s orphanage he discovers the school is haunted and has many dark secrets that he must uncover.

DIRECTION
The Devil’s Backbone is Guillermo del Toro’s second Spanish-language film after Cronos, his first feature-length film. Like that film and every one of his films since, The Devil’s Backbone displays all of Del Toro’s attributes as a director: Strong visuals and camerawork, interesting storytelling with focus on characters, solid performances from actors and dark, atmospheric fantasy worlds. With this film, just the third of his career, Del Toro proves that he is and will continue to be a director to be reckoned with.

SCRIPT
In every Del Toro film, story always seems to take front and center (the way it should be!). Here, he takes what appears at first to be a typical ghost story and turns it into something more, something deeper. When Carlos first arrives at the orphanage, he sees/hears glimpses of the ghost, “the boy who sighs” as the other boys call him. But as the story unfolds, Carlos finds out that’s there so much more to what’s going on – and this is what’s so great about it is that we really have no idea where it’s going. And unlike Cronos, the payoff is actually worth the wait. While the ghost aspect is a part of the story, the main part involves the people, the boys and the workers. Carlos is new to the orphanage and the other boys aren’t really fond of him at first, while there’s sort of a love triangle going on with some of the staffers. All of this is done pretty well, giving us some solid character development and making us care about what’s going on.

PERFORMANCES
Del Toro has always proven that he can get solid performances from his actors and that’s no different with The Devil’s Backbone. The leads are all excellent, particularly Federico Luppi, Eduardo Noriega and Fernando Tielve. Luppi plays Dr. Casares, the head of the orphanage, and gives perhaps a better performance this time around than he did in Del Toro’s Cronos. Noriega plays Jacinto, the janitor, while Tielve plays Carlos, the 12-year-old boy. All of these actors bring a lot of emotion and depth to these characters and make us actually care about what is happening and what is going to happen. The rest of the boys at the orphanage also do a really good job, working nicely with Tielve.

SCORE
Javier Navarrete scored The Devil’s Backbone, and like his two previous films, Cronos and Mimic, the score isn’t very memorable but adds to the atmosphere and world that Del Toro creates. The score is very much in the background, only creeping to the forefront a few times, particularly when the ghost is around. The score serves its purpose but overall is pretty forgettable.

Movie Review: ‘A Simple Favor’ is a twisted good time

Director Paul Feig’s A Simple Favor is a chic, uptempo, thrillfest done with a Hitchcockian flair which is audiences will... Read More »

Before my screening of Snatched, Stars Goldie Hawn and Amy Schumer introduced the movie and Schumer said that... Read More »