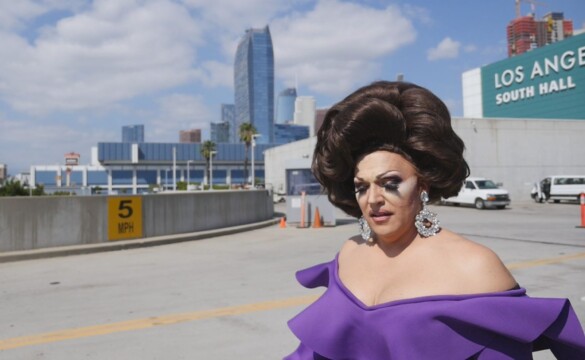 Despite its reputation for being one of the weaker seasons of RuPaul’s Drag Race, season 7 introduced some of the franchise’s most beloved queens to the world. Ginger Minj, Kennedy Davenport, Jasmine Masters, Trixie Mattel, and Katya have all gone on to fame and notoriety, while most of their fellow competitors have fallen in favor over time—they’ve also all been invited back for (at least one) All Stars. One season 7 queen who hasn’t been given the flowers she deserves, however, is Mrs. Kasha Davis, someone who finished in 11th place on her season; not due to a lack of talent but because she didn’t fit the mold. Now, director Angela Washko uses her feature documentary debut to explore the numerous ways that Mrs. Kasha Davis is remarkable and ready for a renaissance.

Told through a mix of home movies, YouTube videos, Drag Race clips, Drag Race audition tapes, and Washko’s vérité camera, Workhorse Queen follows its subject through many highs and lows. We see in the home movies and YouTube videos, a confident star who always knew who she was. “Mrs. Kasha Davis” is a character, an exaggerated mid century housewife who drinks too much and performs homemaking. Her camp sensibilities blended well with the Rochester, NY drag scene and earned her a decent amount of local success. Then, with several years of experience under her belt, the so-called “Olympics of drag” started casting. Fellow Rochester queens Pandora Boxx (season 2) and Darienne Lake (season 6) eventually made the cut, but year after year, Davis did not. Her audition tapes reveal an increasingly rawer and more intimate side of her.

As an art form, drag is an effort to break gender molds and knock down identity barriers. For years, Ed Popil twisted himself into knots trying to fit the heteronormative archetype of the apex suburban family man. Because it’s what his parents wanted (and what he thought he wanted), he married a woman and attempted to live “the ideal,” only to discover that an idyllic life is relative. In my inference, this is where Mrs. Kasha Davis comes from. The film doesn’t fully commit to psychoanalyzing Popil’s creative choices or the exact origins of his drag persona (other than inspirations from his mother), but I’d reckon Popil’s experience with performing picket fence perfection out of drag has a lot to do with his behavior in drag. Mrs. Kasha Davis, the character, is both an homage to and a critique of the suburban decadence she so deftly portrays.

So, with Mrs. Kasha Davis being a distinct and specific rendering of a very particular type of bygone womanhood—plus being a queen of a certain age—she was an excellent choice to round out the eclectic cast of RuPaul’s Drag Race season 7. But, when it comes to TV’s second-best drag reality competition program, singularity can be a double-edged sword. For a show that purports to embrace the entirety of an ever-changing and limitless art form, the judging is somehow awfully narrow, yet incredibly demanding to an almost uncompromising degree. Ironically, when it comes to advancing on Drag Race, there is a bit of a model to follow (and looking like a model is part of it). So even though Mrs. Kasha Davis is undeniably an exemplar of the show’s Charisma, Uniqueness, Nerve, and Talent rubric, she was unfortunately never destined to win…

Herein lies the crux of Mrs. Kasha Davis’ varying levels of achievement and the bedrock of Workhorse Queen. Ed Popil already had a story before entering into The Werk Room and fittingly declaring “I’m ho-ommme!” in the style of a 1950s sitcom dad. Woefully, the show wasn’t all that interested in exploring Davis’ history before asking her to sashay away—mere moments after winning that lip sync against a stymied Kandy Ho (just saying)! Cut to seven years later: Mrs. Kasha Davis has a narrative now, hunny! As Washko’s footage shows, backed up by confessionals from a supporting cast of friends and family, post-Drag Race life first made and then absolutely broke Popil. His marriage to “Mr. Davis” nearly imploded and his professional relationships in Rochester became strained as Popil really put his alter ego’s “There’s always time for a cocktail!” catchphrase to the test for a while.

But, like a beehive-clad flight attendant for Glamazonian Airways, she has been on an ascending trajectory ever since, with just a few bumps along the way. So when—yes, when—Mrs. Kasha Davis rightfully returns for an All Stars season, she can enter The Werk Room and proclaim that “There’s always time for a comeback!” because you simply cannot keep a good broad down. In addition to Davis, my French vanilla fantasy cast for this ultimate All Stars season, if I may, would include: Akashia, Jessica Wild, Carmen Carrera, DiDa Ritz, April Carrión, Shuga Cain, Jackie Cox, and Widow Von’Du. Mrs. Kasha Davis deserves to be among this hypothetical nothing-but-bangers cast of mine because Angela Washko’s film is here to make it clear that Davis’ charisma, uniqueness, nerve, and talent is boundless.