Movie Review: What Leaked from The Fifth Estate was Substance 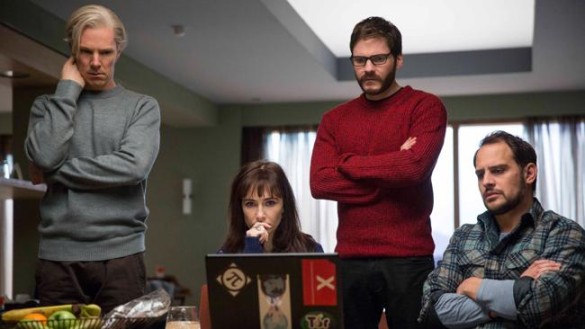 The Fifth Estate is a sharp looking adaptation of true life events that makes the picture a hot topic of discussion worldwide. Bill Condon is at the helm of this controversial look at Julian Assange and Wikileaks, the organization which infamously leaked top secret documents, videos, and other highly classified information belonging to many of the world’s governments starting back in December of ’06. Bill Condon does his best to guide us along the way, utilizing a controversial screenplay as well as his cast & crew (notably featuring Benedict Cumberbatch as Assange). Condon has already taken home an award this year for his direction of Twilight: Breaking Dawn Part II. That may sound like a good thing, but actually he was recognized as Worst Director at the Razzies. I can’t speak to that because by the time that part of the series had arrived I had already checked out, but I can say that the direction for The Fifth Estate will not net him any Razzie nominations. Condon may not always get the best material to work with, but he manages to do some interesting things here. Not being any more familiar with the material than the average audience member who will go to the theater to see this film, I never felt lost or confused, and that is an accomplishment in direction. Condon uses intertitles very effectively and we truly get a grasp on each location as its own unique aesthetic.

Based on material written in two separate books by Daniel Domscheit-Berg (Inside WikiLeaks: My Time with Julian Assange at the World’s Most Dangerous Website) and David Leigh & Luke Harding (WikiLeaks: Inside Julian Assange’s War on Secrecy), the screenplay ends up being a near-complete history of Wikileaks. Yes, the Assange character receives the most attention of any character in the script, but it is because he is the founder of Wikileaks as opposed to being a character study on the man himself. The story really reminded me a lot of The Social Network in that we are being shown the foundation of a website in a way that explores not just the “what” but the “why”. Both films feature a dictatorial, egotistical genius at their respective helm, and in both cases helps explain why the websites were so successful. The Assange character mentions that it takes two things to make something successful: a good idea and maximum commitment. The script for The Social Network had both, but The Fifth Estate, I would argue, has neither. There are some good ideas here (such as the fantasy/dream-like representation of the size and scope of the organization) but none seem correctly placed or finished. The lack of commitment to one specific area of the script makes this a paper-thin patty with a huge bun–not enough meat, but lots of breading. The amount of time Singer spends on the relationship between Daniel Berg (Daniel Bruhl) and his significant other was inexcusable and poorly thought out as it seemed like something else just pulled from The Social Network to add drama. What Singer delivers on is an average script which can keep mainstream audiences interested. What he does not deliver is anything more than that. For the cultural importance this story holds, that is not enough.

Benedict Cumberbatch is having one heck of a year, and his portrayal of Julian Assange only adds another notch to his belt. His performance as Assange was as flawless as I can imagine him giving under the circumstances of the screenplay, and credit must be given to him for doing his best to give justice to a character of current historical relevancy. Daniel Bruhl was good as Daniel Berg, but he just didn’t get a lot of interesting material to work with. His character in The Edukators was much more interesting, and I really wished I was watching that movie instead of this one for his sake (and mine). Laura Linney and Stanley Tucci played as what felt like two characters pulled straight out of Zero Dark Thirty (they were the middle-aged geopolitical experts pulling strings from Washington) and had to have one of the worst introductory scenes of any major actors I’ve seen in a film this year. The scene features them both stone-faced and is nearly laughably bad and should be lying on the cutting room floor. Overall though, the performance by our two leads makes for a mostly well-acted film.

The highlight of the film for me, the score created by Carter Burwell was edgy, slick, and again reminded me of the modern feel of The Social Network. This score is not quite up to par with that one, but it is very imaginative. I felt like I was in a Euro dance club at times (which did happen more than once in the film) and that gave me a real feeling as to where this movie took place. It never felt American to me, and I give credit to Burwell for scoring a film in a way that keeps us at a global perspective.

The Fifth Estate is not a great film. The subject matter makes it interesting, the directing and performances make it watchable, and the cultural relevance Wikileaks holds may allow it to have box office success. But as a film that seems to try to inspire and provoke, it fails miserably. The melodrama and contrived scenes involved in the script had me rolling my eyes more than once, and by the end I felt like I was listening to someone speak his opinion as opposed to feeling motivated and that the governments of the world were scared of my ability to seek out information and share it with others. This is a real shame, as I think the opportunity for a great film was there, and the tools seemed to have been as well. It just didn’t quite work.