Movie Review: ‘Ticket to Paradise’ is Like a Nice Note from Some Old Friends 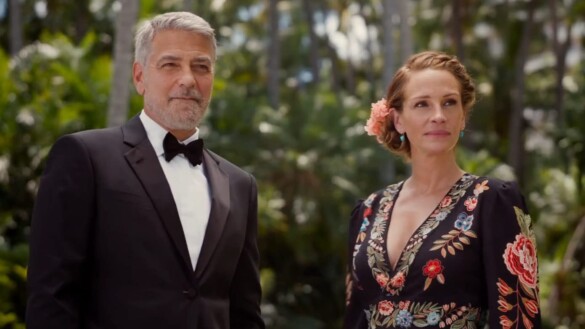 Synopsis: A divorced couple teams up and travels to Bali to stop their daughter from making the same mistake they think they made 25 years ago.

It was genuinely refreshing when the trailer for Ticket to Paradise appeared. For several years, we have been inundated with features of daunting intellectual properties clogging, fighting, and scratching for our attention. With The Lost City earlier this year, and now Ticket to Paradise, suddenly there are wide release films in which the selling point is the two lead performers and not what company logo appears on the poster. It nearly brings a tear to your eye. Sure, the theater experience will never go back to what it was, but what a concept to look at a poster and realize that this will be a self contained 90+ minute movie which expects you to know nothing about its characters, concepts, or history before you go in. It chokes you up to realize there will be movies we can go and see on a Wednesday afternoon when you call out sick because you just can’t with all the emails. Now, truly, cinema is back.

Ticket to Paradise really feels like when you run into some old friends and actually follow through on the plans you say you want to make. Those friends are a little different, their references are a little more current, they look a little older, wear their hair differently, but they’re familiar and comforting. They’re not trying something revolutionary, but they have evolved beyond their premise. They may even have a few more tricks up their sleeve than they used to.

Director Ol Parker and cinematographer Ole Bratt Birkeland have embraced the drone shot. Is a silly romantic comedy the best place to employ the drastic, dramatic zooms that a drone allows? Not really. It kind of looks silly. It also looks more than anything like they’re using drones to show the beaches, resorts, and tourist destinations of Bali. It’s like they got a special tax credit for their efforts at boosting the tourist traffic. It also might raise an eyebrow when many characters voice that the island is the most beautiful place on Earth.

The script by Parker and writer Daniel Pipski also struggles with anything but its main focus on the two couples. There is the opening sequence in which David (George Clooney) and Georgia (Julia Roberts) are in separate cities, talking with colleagues. We never see or hear of these colleagues again. In fact, Georgia might as well have been talking at a piece of wood for all that her colleague is there to do. In an egregious misuse of potential, Wren (Billie Lourd), the best friend of Lily (Kaitlyn Dever), has few scenes that actually land. She, like the two colleagues, is mostly a sounding board for more major characters to exposit at. In her other scenes she’s the extra dash of comedy that suddenly makes the scene over funny and you don’t laugh, just weakly smile until the uncomfortableness is over.

What Parker and Pipski’s script does well with, though, is that the Indonesian side of the wedding is never the butt of the joke. These characters, played by Indonesian actors, are in on the joke and funny in their own right. These kinds of comedies have often focused so much on the differences between cultures and how weird some traditions are. Ticket to Paradise skips all that and brings the parents and families together for some common ground.

What we can all agree on is that romantic comedies like this can live or die on the strengths of their leads. If the two leads aren’t already good actors, they can have a hard time selling all the emotional ups and downs a film like this requires. George Clooney and Julia Roberts are good actors. They absolutely sell every moment and emotional beat. The two of them are effortlessly charming on their own. Together they are a force that helps you push past any misgivings about the situation presented and just watch two great actors who also happen to be movie stars, who look like they’re having a lot of fun. Even the end credits bloopers, that can be insufferable in other contexts, are made all the more delightful by these two because they clearly like each other and enjoy being able to play with one another.

Ticket to Paradise is a shock of normalcy in a sea of lycra and CGI magic. It’s two of your old friends showing up with new stories and the same engrossing charm. It’s by no means perfect, but it is perfect counter programming between the capital C cinema vying for awards contention and the capital C cash grabs by the IP factories desperate for your dollars.