The Hidden Tragedy of Tony Scott’s ‘The Hunger’ 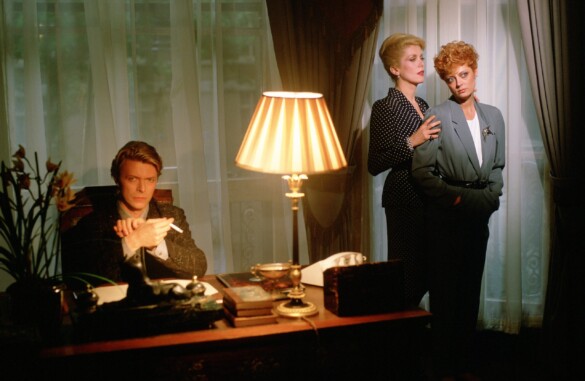 Tony Scott’s vampires in The Hunger are not bound to the typical rules of vampirism established in late 1800s fiction. There is no garlic or a crucifix in sight, they can see their reflection in mirrors, go out during the day, sleep in a king-sized bed rather than coffins, and rather than plunging their fangs into victim’s bare necks, they use ankh-shaped pendants to slash their throats and lick up the blood up at their leisure. That is the one thing that ties these beings, playing by Catherine Deneuve and David Bowie, to their mythic lore: a never-ending thirst for human blood.

The film is set in modern times, 1983 to be exact, beginning in an effortlessly cool nightclub populated by a clientele made up of new-wave punks. Peter Murphy, of the English rock-band Bauhaus, croons “Bela Lugosi’s dead…” as Miriam (Deneuve) and John (Bowie) stalk their young, hip prey. Their carnivorous conquest, as is the case in almost all modern vampire fiction, is linked directly to sex. Suddenly, things begin to change, and fast. John wakes up with gray hair and lines under his eyes that hadn’t been there the night before. 300 years after his transformation at the hands of Miriam, who hails from Ancient Egypt, John learns that his promise of eternal youth was in fact, a mere promise of eternal life. He begins to age years in hours, and the pair desperately seek out a solution. Enter Dr. Sarah Roberts (Susan Sarandon), a gerontologist aiming to decelerate the aging process through the study of primates. After a few days, John has become a wrinkled shell of what he once was, begging Miriam to kill him, which she can’t (or won’t). She lays him to rest in a coffin in the attic of their lavish New York home, among a dozen other of Miriam’s past lovers who live as skeletons trapped inside wooden boxes for all eternity.

When Sarah and Miriam meet, their relationship, with little need for persuasion, becomes sexual. Queerness and vampires are not a novel association, with Sheridan Le Fanu’s Carmilla (which predates Dracula by 26 years), portraying a young woman becoming hopeless entranced by a beautiful female vampire. Presumably, Miriam does not discriminate with the gender of her lovers, while the act takes Sarah by some surprise. The impetus of their encounter is admittedly comical, as Miriam plays Leo Delibes’ “Flower Duet” on the piano and Sarah “accidentally” spills a drop of brandy on her white t-shirt and casually undresses in front of a total stranger. Originally, Sarah was meant to be drunk during this scene to explain away her sudden sexual fluidity, but Sarandon insisted “you wouldn’t have to get drunk to bed Catherine Deneuve, I don’t care what your sexual history to that point had been.”

During this moment, when the two women are in bed together, Miriam bites Sarah’s arm and begins her transformation, claiming her as her new lover. We soon learn of just how important human blood is for the vampire (a word never actually uttered throughout the film’s runtime), as Sarah begins to suffer immensely due to her hunger. Her symptoms are clearly reminiscent of those of a drug addict. She becomes feverish, disoriented, irritable, and unable to function until her thirst is quenched. Sarandon, later discussing the film, noted that the film asks: “would you want to live forever if you were an addict?”. Aside from the frequent link between vampirism and sexuality (queer or otherwise), vampire films typically link the creatures to some other cause celèbre. While the explicit metaphor for vampirism in The Hunger may be drug addiction, there is another latent, likely unintentional meaning I can’t help but see hidden within the film’s tragedy.

The novel on which The Hunger is based was released in 1981 by Whitley Streiber, the year the CDC first published a written report on what would later be known as AIDS. Over the next two years, significant action was taken among medical researchers and gay rights activists to determine a cause of the illnesses plaguing queer communities. At this time, it was known among those affected, but remained largely unspoken among the general public. Realistically, I don’t believe this would have been on the minds of the makers of The Hunger, including its director Tony Scott. However, one can easily watch this film and notice eerie, devastating parallels between its story and what was happening in those tight-knit communities across the country.

The AIDS crisis started in confusion. Doctors and nurses were seeing previously healthy young men with symptoms more typical of men three times their age. Purple lesions, pneumonia, and rapid weight loss soon led to death at alarming rates. Photographs of that era show men one would never guess to be in the early decades of their life, as skeletal shells of themselves lying motionless in their hospital beds, surrounded by mourning family, or all too often, utterly alone. This was the image that came to mind as John began to fall apart. “I’m a young man. Do you understand?” he pleads to Dr. Roberts as his hands show rapidly developing liver spots. Adding to the tragedy is that we, that is the real life audience, never saw Bowie get to this point in real life. His death at 69 was a shock, and considered rather young for a man whose legacy seems to define time and space. Miriam, like so many family members and partners of AIDS victims in the 1980s, watches her loved-one age right in front of her eyes, and she can do nothing to help him. Even after John is (for all intents and purposes) dead, he lingers in her mind, and she holds onto what little she has of him and her past lovers. She is constantly surrounded by the memory of death, as became all too familiar amongst the gay community at this time. While the film is considered to exist within the queer cinematic canon due to the relationship between Miriam and Sarah, it could easily gain such distinction as a portrait of a woman devastated over the untimely loss of her lover concurrent with the AIDS epidemic.

The Hunger is undeniably stylish and sexy. From a chic shadowy night-club, to Miriam’s massive brown-stone somewhere in the Upper East Side, to the effortless Parisian fashion worn by Deneuve, to Sarandon’s cropped haircut, to Bowie just being Bowie. It even shares some stylistic cues with Scott’s brother Ridley’s sci-fi masterpiece Blade Runner, portraying a city in an almost purgatorial state. The plot, unfortunately, loses some of its elegance in its final act as Miriam’s reign comes to an end in a storm of walking skeletons. The ending, which Sarandon has disavowed, is intentionally ambiguous as to leave room for a (nonexistent) sequel, but ultimately leads to weak character and plot resolution. Still, it is a worthy watch for this haunted time of year, especially for lovers of gothic horror, new-wave music, and above all, sexy, queer, piano-playing vampires.