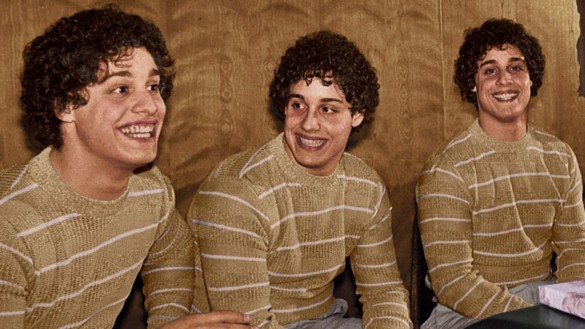 Director: Tim Wardle
Synopsis: In 1980 New York, three young men who were all adopted discover that they are triplets who were separated at birth. They describe their lives, and what they’ve discovered about why they were separated.

I never had any siblings but the thought of having one has always crossed my mind. What if someone that looked like me, talked like me, laughed like me walked into the room? How would I feel? What would I do? How would my life change? These are just some of the question at the heart of director Tim Wardle’s new documentary Three Identical Strangers. I will say up front, that if you have not read anything about this story or seen the trailer for this movie, try to go in as blind as possible. This review will be spoiler free because it is very hard to talk about this story without ruining some of the surprises within the film. I will do my best to not give too much away but this movie has more twist and turns than any documentary I have seen in some time and plays more like a class warfare thriller.

The film follows Bobby, Eddy and David, three men that find out, in the summer of 1981 at the age of nineteen, that when they were babies, they were separated at birth, by reason that I will not get into. It was a story that swept the nation, one that movies couldn’t have even had made up. Bobby and Eddy found each other through a mutual friend and David found them by looking at a picture of them together in the paper. This is way before social media, so the odds of something like this happening were crazy low yet they found each. The boys become overnight celebrities based on their story and they are on the cover of newspapers and on every talk show telling everyone about this amazing story. And while them finding each other and reconnecting after all those years would be enough of a great story and good movie, there is more to this story than meets the eye, and thus is when the film splits into two part.

The first part focuses on the boy and their upbringing, who their parents were and what kind of lives they lived as kids. It also shows their relationship after their story broke, and how they become close, moved in together, started a business and grew into each other’s lives. While this is going on, the other story unfolds, with the boy’s parents, journalists and the filmmakers uncovering why the boys were separated at birth, and why it took nineteen years and a lucky encounter at college to find each other. The film then blends the two stories together, the mystery of the separation with the story of the three boys and the toll all of the revelations you hear about in the film have on their lives. And while you are learning about their situation, you start to find out about other siblings and their stories, thus giving an even bigger scope to this film than just three boys.

The editing in the film is so meticulous, that you never know if something you saw earlier in the film is a piece of the puzzle that you will need for later on. Wardle’s direction mixes old stock footage, reenactments and interviews nicely enough but his direction isn’t as good as the story he is telling and the overall message of the film, which is that of coming together through the worst of times for your family. Though these men’s lives will forever be change by events and decisions totally out of their control, they aren’t using it as an excuse, they are using their story to help other within their situation and find answers for all. Three Identical Strangers may be a story of mystery, tragedy and regret but it also one of hope, forgiveness and love, no matter who or how you were raised.