Movie Review: Netflix’s ‘How It Ends’ is a long road trip with not much to see 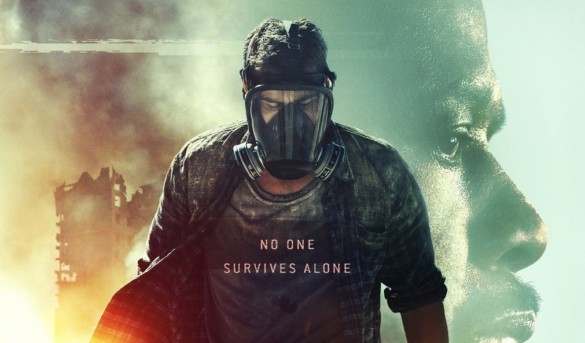 Synopsis: When a mysterious disaster turns the country into a war zone, a young lawyer heads west with his future father-in-law to find his pregnant fiancée.

Early on Netflix surprised me with a number of their releases that actually ended up being fairly good films, enough so that I had that pleasant feeling of satisfaction after each viewing. ARQ and I Don’t Feel At Home In This World Anymore are two I can name off the top and I could pull out a list of their amazing original series and comedy specials that have kept me occupied on those lazy Sundays. Netflix had my attention and time and time again I found myself researching their upcoming releases and willing to give them a fair watch even when early reviews were shaky. However, more recently that feeling of satisfaction has been lost and I have witnessed a decline in the entertainment value of their original films and releases. I am not sure what the cause is but there has been some definite oversight in their quality assurance department, which brings me to How It Ends.

It begins so much like any other world ending apocalyptic film that you can check off the boxes of what to expect. Power outages, bizarre weather, cellular failure, traffic jams and human chaos. The audience witnesses the beginning of the end through budding attorney Will Younger played by Theo James who actually does a decent job of emoting through a film with not much dialogue. After learning that his girlfriend Samantha (Kat Graham) is pregnant with their baby boy Will sees her off to a flight for Seattle and then attempts but fails to ask her father, Tom Sutherland, for her hand in marriage. Tom, played by Forest Whitaker, is a hard-nosed vet who, for reasons unknown to us, clearly hasn’t taken a liking to Will. Whitaker never fails to bring a strong performance and this is no different. I could not stand Tom which is more a compliment on Whitaker’s acting prowess than the writing. The next morning Will and Samantha are on a video call when the mysterious event takes place and after getting some strange interference and troubling sounds Samantha’s line goes dead with her last foreboding words being, “Will, something’s wrong.” This shoots our heroes, Tom and Will, off on a long cross-country journey to find Samantha, this excursion being the real meat of the film.

The essential problem with How It Ends is that it starts with a common scenario that we have seen in several films of this genre, surrounds it in mystery but falls flat by leaving its characters with nothing really to do and in this regard it offers nothing fresh or new to say. Will and Tom spend an incredibly large portion of the film driving to Seattle to find Samantha while having random encounters with law enforcement, criminals and other survivors. But there is nothing significant about any of these interactions. With the exception of a young auto mechanic named Ricki (Grace Dove) none of the people they encounter have any depth or purpose. Each experience feels just as insignificant as the previous and none offer to the audience any glimpse into the mystery surrounding this world altering event. In the first act of the film with each encounter you perk up and ready yourself for a brief glimpse into the films direction but unfortunately none is given. 30 minutes in I found myself doing a time check and was disappointed to see how far along I was with nothing really to show for it. Even the relationship between Tom and Will, which in the beginning of the story seemed to have some complexity, is never really expanded on. This could have been a vital part of the story and would have given the audience something to latch on to but instead their relationship is never really explored which leaves the characters themselves feeling like empty vessels going through the motions.

Lastly the final act, plainly speaking, is frustrating and leaves the audience hanging to dry. The last half hour takes a slight curve in a direction that wasn’t expected and almost feels as if was written by a different author. It doesn’t flow with the rest of the films tone and much like everything else in the story it never really evolves past what we see on the surface. If anything it generates more questions and provides no answers, all as the film is preparing to close.

Overall there aren’t many positive things to say about this new Netflix release. The actors handle their roles well and effectively deliver their lines. The cinematography can be stylish at times and the film uses an interesting color palette to give a gritty and desolate tone. And now and then you get some beautiful shots of landscapes as the camera pans over rolling hills, tranquil open fields and shoreline vistas but this can only keep your attention so long. Outside of these distractions the film drags and takes you along for a ride that becomes predictable and uninteresting very quickly and eventually settles on an ending that feels less like a conclusion and more like a shrug of “We’re out of ideas so lets just roll credits.” As much as I enjoy post apocalyptic films and was looking forward to this viewing How It Ends is not a film I can recommend. If you have some free time and you find yourself scrolling around Netflix I would keep my distance, maybe re-watch Stranger Things instead.

Movie Review: ‘The Truth’ confronts the truth about family and memories

Hirokazu Koreeda is a filmmaker whose always been interested in the truth about humanity. Whether it be about... Read More »