Movie Review: The Wolf of Wall Street Is In Top Form 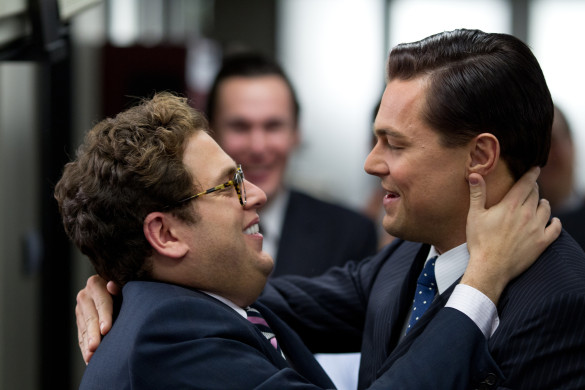 Synopsis: Based on the true story of Jordan Belfort, from his rise to a wealthy stockbroker living the high life to his fall involving crime, corruption and the federal government.

DIRECTION
Martin Scorsese is in top form in The Wolf of Wall Street, which re-tells the story of Jordan Belfort, who scammed his way to the top on Wall Street in the 1990’s. The movie is very meta and only from the perspective of Belfort, which Scorsese uses tremendously well to tell the story. There are many party scenes that display drug use and infidelity on a level that only these type of characters can provide, and many of them are shot really well. Scorsese uses a lot of slow motion to capture the richness these characters live in and the kind of lifestyle that defines these characters. There are just as many office “meetings” that are depicted in a similar fashion that reveal the same things about what’s going on. This film is about style. The story is fairly simple and Scoreses doesn’t focus on the numbers much. It’s about the extravagant parties, the wild chaos and the pride that eventually ruined these guys and it’s evident that’s what Scorsese was going for. And because of that, The Wolf of Wall Street is entertaining and is absolutely gripping. The big knock, and this is no surprise, is the length of the film. You got to give Scorsese for wanting to give depth, and in some cases, 180 minutes in necessary, but not here. Many of the scenes are the same, abrasive partying with different props that don’t add anything to the story or the characters. Overall though, Scorsese is great and it’s a film that is sure to entertain you, despite the despicable characters.

SCRIPT
The story follows the real-life story of Jordan Belfort (Leonardo DiCaprio), who defrauded all of his clients in a massive securities scheme, among many other things. It’s a story we’ve all seen before, meaning, this film is about style. It’s the “how” he got there that matters and, boy, it’s a doozy. As mentioned, it’s all from Belfort’s perspective so we never see any consequences for anyone else and only Belfort speaks to the audience. In the beginning, Belfort seemed happy with his wife and in a humble place. That is, until he learns how to be a penny stock broker and how that brings him millions. This brings us a drug-induced coma that features many orgies and hangovers that is hard to keep count of after awhile. The film is important in the way that it shines light on a problem that seems to be a constant nag and seems to be something we continue to hear in the news all the time still. It also depicts how pride and selfish choices always lead to negative consequences, regardless of how much money you have. There is little to like about the characters with almost zero redemption as well. But the script is highly entertaining, especially given the characters we have to deal with. Overall though, there’s not much new here in terms of content. It’s all about whether or not you like the style it has.

MOVIE REVIEW: The Secret Life of Walter Mitty is a great adventure!

PERFORMANCES
Leonardo DiCaprio is in top form as Belfort and absolutely captivates you in his performance. It takes a certain skill to bring us a character that has almost no likablity to him, at least morally, but still make it as engaging as it was. Sure, the rich lifestyle can make anyone envious, but there’s much more going on beneath the surface. DiCaprio brings all of that out, layer by layer, as the film progresses and we see one party scene after another. Depending on how you sit on the fence though, you’ll either love him more or hate him more. Either way, DiCaprio nails hit. Johan Hill is also on his “A” game. This is arguably a better performance than his Oscar nominated performance in Money Ball. The chemistry he has with DiCaprio is crucial and leads to many great scenes in the film with the two. Margot Robbie is amazing good and is crucial DiCaprio’s character. She plays his wife and the fallout between them matters on many levels and she plays it gorgeously. There are many, many other fantastic supporting roles as well including Jon Favreau, Rob Reiner, and Kyle Chandler. But holy Lord, when Matthew McConaughey is on screen, he is absolutely magnetic and hilarious. He’s not there much but still has a nice punch (or beat to the chest).

SCORE
There is no original score here but a pretty good soundtrack that includes tracks from Jimmy Castor, 7Horse, The Cannonball Adderley Quintet among several others as well. Many of the music choices were solid and added some nice touches to the film. However, they aren’t going to necessarily going to elevate the scenes that much. The camera work and performances do that enough on their own, and while some of the songs were really great, most of them are nothing more than good backdrop music. For Scorsese, this makes sense though.

FINAL THOUGHTS
The Wolf of Wall Street is one of the year’s best movies for sure, although it’s sure to alienate some people. The film doesn’t offer anything new in terms of story or content but it makes up for it in entertaining characters, despite them being morally ignorant. It’s about style. And what Scorsese, DiCaprio and Hill bring to the table has tons of it. In the end, you will end up not liking their choices but it showcases a problem that many people have and delivers a final product that answers the age old question: does money really solve your problems? As you could guess, it only adds to it. But the meta-style works and it’s a film that will surly entertain you.