Movie Review: ‘The Truth’ confronts the truth about family and memories 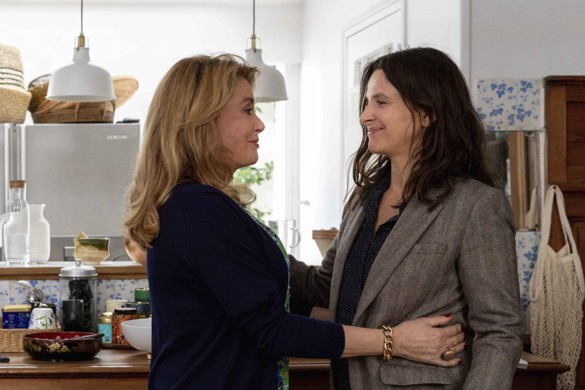 Synopsis: A stormy reunion between scriptwriter Lumir with her famous mother and actress, Fabienne, against the backdrop of Fabienne’s autobiographic book and her latest role in a Sci-Fi picture as a mother who never grows old.

Hirokazu Koreeda is a filmmaker whose always been interested in the truth about humanity. Whether it be about family, memories, how our past effects us in the present, the things that define us as people, whatever the case may be, he’s always examining the fundamental truth of our day to day lives. So, it’s apt that his latest film is simply called The Truth.

But JD, how does this differ from his previous films? Well, I’m glad you asked. For one, this is Koreeda’s first non-Japanese film. It’s spoken in French and English, and it stars legends Catherine Deneuve, Juliette Binoche, and Ethan Hawke. That in and of itself separates this film from the rest of Koreeda’s filmography.

Secondly, it’s Koreeda, in a somewhat meta way at times, exploring the film industry. The Truth is a movie about the movies. Well, a specific movie. A sci-fi film even. Which couldn’t be further from what has defined Koreeda’s own career. The Truth is centered on the relationship between Lumir (Binoche) and her mother Fabienne (Deneuve), an older actress who recently published a book about her acting career. The problem, though, is that Fabienne has seemingly manufactured certain events involving Lumir. “I won’t tell the naked truth, it’s not interesting,” Fabienne rebuttables at one point. It becomes clear early on that the two have a wedge between them.

A plight that becomes further highlighted when Fabienne begins shooting this sci-fi film that she’s been cast in. The movie is about a mother/wife who decides to live in outer space (aging is reduced drastically in zero gravity environments) as she’s been diagnosed with cancer. However, she does come home every seven years to see her daughter and husband. This, of course, leads to emotional conflict as the daughter becomes distant from her mother, despite her deep love for her. Sure, that’s an obvious metaphor for Fabienne and Lumir, but in the hands of Koreeda it’s poignantly effective. Especially thanks to Deneuve and Binoche, who offer captivating performances and tap into those emotional nuances effortlessly.

But it’s not just time and distance that The Truth is interested in as it relates to familial relationships. Koreeda is equally fascinated with memories and questioning if they can be trusted. From scene to scene, characters offer up memories that effect them deeply, only for the film to then question the validity of those memories. “You liked your mother’s acting as a child,” Luc (Alain Libolt) tells Lumir at one point. “I don’t remember that,” replies Lumir. Of course it’s ironic as Luc is also recalling that from his own memory. So, whose memory do we trust in that moment? What is the truth in that one sentiment alone? That’s just one example. The film is littered with textured sequences that similarly provoke the raw way in which we cling to memory and emotion.

I, obviously, don’t want to give anything away, but it’s quite breathtaking in how all of that culminates in the final scenes. There’s so much about love, heartbreak, brokenness, running from the truth, re-connection and forgiveness that threads together in such provocative ways.

Y’all, Ethan Hawke is in this film. If you’re a fan of Koreeda and Hawke like I am, this was truly a treat. Hank ultimately has a small role, but an intriguing one. He’s the husband of Lumir and a small time TV actor, which lent itself to some funny meta jokes about his abilities to act. He does tether to The Truth’s larger themes, given one scene he has with Lumir that reveal’s his true character, but mostly Hank is there to offer some welcomed levity to the film.

All in all, The Truth is everything that we typically love about Koreeda. Its ideas on the truth, why we’re afraid of it, how we can embrace it again, is nothing short of sublime. Perhaps the film’s metaphors and parallel storylines are obvious at times, but when conjured together in Koreeda’s calm rigorousness, it makes for a riveting experience. As usual, Koreeda doesn’t do anything flashy with his direction. It’s pragmatic and shot with assiduous diligence. In short, it’s about his characters. What they are experiencing and how they’re evolving. Not only will you be able to handle The Truth, but you’ll be wanting more by the time the credits roll.