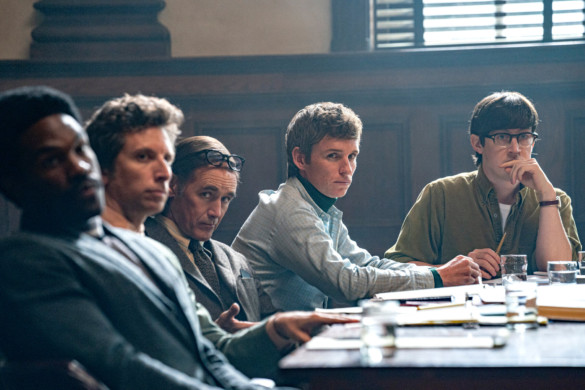 Synopsis: The film is based on the infamous 1969 trial of seven defendants charged by the federal government with conspiracy and more arising from Chicago’s countercultural protests at the 1968 Democratic National Convention. The trial transfixed the nation and sparked a conversation about mayhem intended to undermine the U.S. government.

I am a sucker for a passion project. When directors promote their finished films, they usually tell us how long it took to get to the big or small screen and all the trials and tribulations it took to get it made. It’s curious for this reviewer to see why they wanted to keep pushing this to get made and get this released for audiences to see around the world. With Aaron Sorkin’s latest The Trial of the Chicago 7, the writer-director has been saying that he wrote the screenplay all the way back 2007 when Steven Spielberg asked him to write about this subject. For whatever reason, we never got the Speilberg version of the film, and as time has gone on, many never thought this movie would get made. But now, in a year of social injustice and protest around the country, this is the perfect time to release The Trial of the Chicago 7 due to how relevant the subject matter is.

The story follows the trial of eight defendants charged by the United States government with conspiracy to incite riots at the 1968 Democratic National Convention. We go back and forth from the proceeding in the trial to the actual events at the ‘riots.’ The reason these men were put on trial wasn’t because of the demonstration they caused, but because of the message they were spreading across the country. Therefore, President Nixon and his Attorney General used Tom Hayden (Eddie Redmayne), Abbie Hoffman (Sacha Baron Cohen), Jerry Rubin (Jeremy Strong), Rennie Davis (Alex Sharpe), David Dellinger (John Carroll Lynch), Lee Weiner (Noah Robbins), John Froines (Daniel Flaherty), and Bobby Seale (Yahya Abdul-Mateen II) as examples of what it is like when you cross your government and upset the statuesque.

It’s a disturbing trial because the fix is in from the moment they step into the courtroom, with a judge (Frank Langella) clearly siding against them, given how he treats their witnesses and evidence by throwing it out left and right. At the same time, objections are sustained by any member of the eight men’s legal team. This shows that no matter how noble or brave or smart your ideas will be, the powerful will stop at nothing to silence you. These men were victims of a paranoid administration, much like the one occupying the White House right now. But what do the powerful have to be afraid of, well everything. Being questioned on every basic level idea they stand for by individuals that are just smarter than them and can call them out on their nonsense chaps the weak-minded’s heart to the point they seek vengeance. And this trial, and the time spent in jail by any member of the defendants, is the icing on a cake of unchecked power and corruption by those involved.

Sorkin, known for doing political projects like Charlie Wilson’s War, The American President, and the television show The West Wing, is right at home with this story. This movie is about the powerful taking on the powerless, and he shines a light on the wrongfully treated men on trial. He also gets us the best performances of most of these actors’ careers, especially Mark Rylance, as William Kunstler, the lead member of the defense counsel. We feel Kunstler’s frustrations throughout The Trial of the Chicago 7, mostly because he is just like the audience; he wants justice for these young men and also doesn’t want to see their lives ruined in a game of political warfare. It’s a miraculous performance that’s also matched by stellar work from Baron Cohen, Redmayne, Strong, Lynch, and Abdul-Mateen II.

But beyond the stellar acting and Sorkin’s impeccable screenplay, it’s his direction that feels like it has stepped up big time for this project. While he did a decent job behind the camera with Molly’s Game, this is where he excels as a director. He really makes you feel the intenseness of the riots, the claustrophobia of everyone crammed together in the park, the brutality of the cops on these young Americans. Mixing in real footage into what he shot makes this feel like a documentary at some times while also shocking the audience by showing what our government is capable of.

The Trial of the Chicago 7 will get criticized for being too old school, or that this is lesser Sorkin, or that it’s too safe of a film to win Oscars, or whatever. But for me, it’s a film we need right now to show the world just how dangerous unchecked power is and how an individual’s ideas are worth fighting for, not locking away. The Trial of the Chicago 7 is Aaron Sorkin at his finest, and I hope the next project he does has as much passion and heart in it as this does.