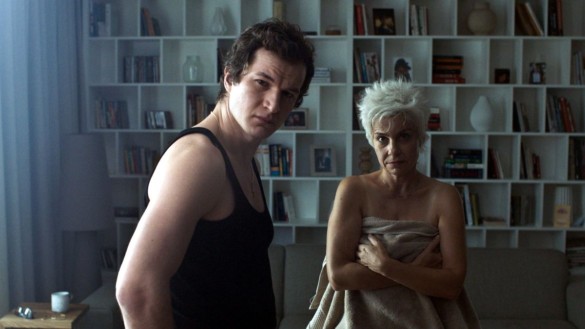 Synopsis: While working as a masseur in a gated community in Poland, Zhenia, a Russian-speaking immigrant from the East unexpectedly builds a cult following

It’s the time of year where contenders for the next Oscars begin to emerge, whether it be actors, scripts, or even scores. One category that is often the subject of excitement is the International Film category, which is currently held by last year’s Best Picture winner Parasite. With a handful of strong films across the world already screened in this unprecedented and unpredictable year, another has arrived. Never Gonna Snow Again, which has been selected as the Polish entry (notoriously a country that has a high level of success) is a hypnotic, mesmerizing experience, and one that is sure to win over audiences across the globe.

The story follows Zhenia, a masseur and immigrant who begins work in a protected neighborhood in Poland secured by gates. His clients range from a mother to a cancer patient, to a woman obsessed with bulldogs. It’s a colorful range of characters who weave in and out of the film depending on who Zhenia spending time with. Never Gonna Snow Again is classified as a comedy of sorts, and that’s thanks to the characters that Zhenia encounters, some completely outlandish. Particular highlights in the ensemble include Maja Ostaszewska, the first client we see of Zhenia in her home, and Lukasz Simlat as a cancer-stricken man who enjoys the time he spends with Zhenia, even if it’s obvious his wife has fallen for the irresistible masseur.

Zhenia’s back story is also a fascinating one. Born in Chernobyl, it appears he has been gifted with special powers thanks to the disaster, with a flashback scene even indicating his ability to move objects. It’s a mystery that continues to unravel itself throughout the film, as we explore more of his exceptional past.

For these characters, most of whom rich and wealthy enough to live in such a secure community, their source of happiness becomes Zhenia, so much so that some begin to grow jealous when they see him with anybody else that isn’t them. They live in fear that perhaps he won’t want to dedicate his time to them anymore, with a few encounters see clients seeking reassurance. “You look 35,” “Don’t you usually say 28,” says one of Zhenia’s older clients, a small example of the attention to details that these characters remember. They know Zhenia doesn’t really mean it when he compliments them, but just hearing his words is enough satisfaction.

Alec Utgoff’s performance is extraordinary, somehow creating a character that although doesn’t speak all that much, oozes charisma and likeability. Zhenia is a popular character within the film, one that’s heavily relied on to complete the other characters and fulfill their happiness. It’s therefore important that Utgoff can reflect this to the audience too and he does so. He’s found himself in small roles in the past such as Netflix’s Stranger Things as Alexei, but after this performance, he’s no doubt going to find himself as a leading man going forward.

From the opening moments of Never Gonna Snow Again, it’s obvious that it’s going to be a gorgeous watch. Co-director Michał Englert serves as cinematographer and captures every small detail exquisitely, especially the film’s most tender moments.  The scenes set in a forest – whenever a client is asleep or in one of Zhenia’s trances – are beautifully shot, with an eerie vibe especially when it’s the turn of a former army veteran. A character we only see aggressively arguing with people in the street, he suddenly feels a lot more vulnerable in the woods, dressed in army uniform. It’s a haunting reminder that our pasts shape who we become – and for this character especially, he is defined by his past experiences and occupation.

It’s not common for a film to be working with two directors, but Malgorzata Szumowska and Englert have been such long time collaborators that they work and balance each other extremely well. While Szumowska is known for her films such as The Other Lamb, Englert has worked as her DP, so the transition to co-director is a natural one. We should all be excited about their future, especially if they can continue to create the spellbinding scenes that they do here.

There are a couple of occurrences throughout that don’t make complete sense – particularly on a first viewing – which does affect the film a little. While the lingering questions create a sense of intrigue in your head, others remain to frustrate as they don’t fit what we think we know. If the aforementioned forest is a metaphorical one where characters are seen when in a trance from Zhenia, how is it that Gucci’s bulldogs happen upon it? Is it a real place anyway, but if so does that not remove the beauty of those shots? The film also sticks around with clients a little too long on a couple of occasions, with no real destination, but this isn’t enough to detract too much from the quality overall. By the film’s conclusion, the time spent watching these characters develop a relationship with Zhenia becomes worth it, with a poetic closing few notes that round off Zhenia’s character arc perfectly.

Polish cinema has been undeniable in recent years, particularly with the works of Pawel Pawlikowski. Ida and Cold War were two of the best films of the last decade, and the work from duel directors Szumowska and Englert here already provides a platform for Polish cinema to grow even bigger in the coming years. Never Gonna Snow Again is mesmerizing and hypnotic and deserves your time to fully experience it. It features some of the year’s most beautiful looking shots, and Utgoff’s character and performance will stick with you long after the credits.