Movie Review: ‘Night Of The Kings’ Doesn’t Have the Magic to Make it Special 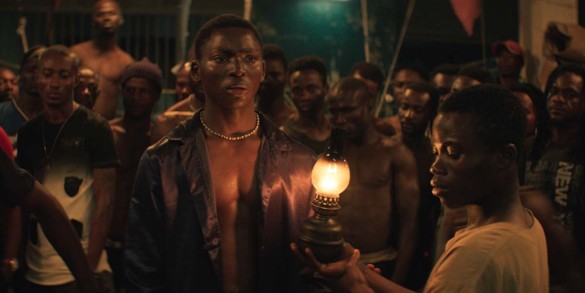 Synopsis: A young pickpocket (Bakary Koné) is sent to the MACA prison in Abidjan. To survive, he will have to compel the other prisoners with his storytelling.

In Philippe Lacôte’s Ivory Coast prison drama, the institution called MACA (which is a real-life notorious prison) becomes the new home of a young man (Koné Bakary) serving time for robbery and quickly learns his place in the prison. Given the nickname Roman, his job is to survive one whole night while the moon is red by becoming a storyteller to the rest, making them from the realms of his own life. From the beginning, you can tell Roman is unprepared as he is immediately thrown into the fire and must adapt quickly under the threat of death. MACA is not a place where the behavior isn’t as dangerous as those Andy Dufrane dealt with in The Shawshank Redemption. Instead, prisoners actually run the whole place in a tribal state where protocols of a village in the wild are the name of the game.

The stories are a mix of African folklore and recent events from the Ivory Coast’s rough past, all told on a soapbox as Roman nervously paddles through to gain respect and retain his life. The inmates watch with anticipation of what surprises this young man has in store while in actuality he improvises. And the film, Lacôte’s sophomore effort, does feel like an entire improvised story where it’s on the actors to give life into every word being breathed out. The scenes in the prison tend to have much of a sound stage feel when it shouldn’t have that mood, but the exterior flashback scenes capture the scenes on the beaches and in the dangerous shantytowns with the full vigor of the Ivory Coast’s past.

The atmosphere is one of fascination because of how very far it is to Western senses on prisons which is a shame that the backgrounds of the other main prisoners weren’t told more. While MACA is a tradition, it isn’t given much explanation and leaves a few questions on just how this all started and the meaning of the names. Even with the slam poet-like movements that heighten every word from Roman, you don’t necessarily grasp where he’s going with it and how the climax can bowl over so suddenly. While it does raise eyebrows into another area of African cinema, Kings does not have the magic it should deliver.