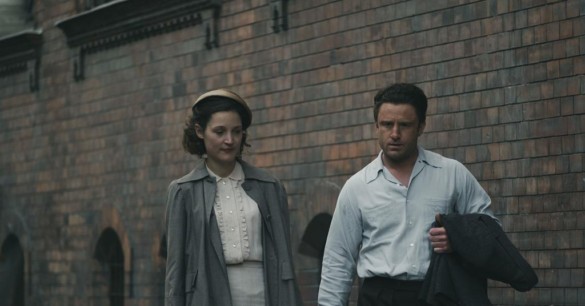 When someone hears that actor Ben Foster lost and then gained back 60 pounds to play a boxer in a biopic, it’s impossible to not think of Robert DeNiro and his Oscar-winning performance in Raging Bull forty-one years ago. But The Survivor, directed by Barry Levinson (Rain Man), in which Foster plays a Jewish man who survived Auschwitz by boxing other Jews, is a very different movie than Raging Bull, despite having a similarly transformative performance at its center.

The Survivor tells the true story of Harry Haft, a middling pro boxer in New York in the late ‘40s whose biggest claim to fame—and promotional draw—is that he survived Auschwitz. Nobody knows exactly how he survived because nobody has ever asked until a journalist, played by Peter Sarsgaard, shows up, looking to tell Haft’s story. Harry had been searching for any information about Leah, the girlfriend that he was separated from during the war, so he does the profile, hoping the publicity might reach her, if she’s still alive. But telling his story is not easy. As we learn from flashbacks, Harry was forced by a sadistic Nazi officer, played by Billy Magnusson, to fight other camp inmates to the death—most often other Jews—for the entertainment of the German officers. As long as Harry kept winning, he would live.

As soon as Harry’s story gets published, his local Jewish community views him as a traitor and shuns him, but Harry seems unaffected by the scorn, as his own guilt has already caused his own crippling inner shame. The only thing Harry really cares about is finding Leah and, when the article doesn’t work, he tries to think of something he can do for even more publicity, and that would be to fight the most famous boxer on the planet, Rocky Marciano. Even though he would be overmatched, his team is able to secure the bout, and the film then becomes a boxing movie, Rocky-esque training sequence included.

Levinson is a gifted, Oscar-winning director, but he allows The Survivor to tell far too broad of a story. The screenplay, by Justine Juel Gillmer, hits on a few too many beats, with far too discordant tones. Because of its wide scope of story and emotions it needs to cover, the film ends up being overly thin on content, choosing instead to skim through significant moments in Harry’s life, never delving too deeply into any emotional moments, making the film seem more like a highlight reel than a character study.

The most impactful moments of the film are the flashbacks to Auschwitz, which are shot in shadowy black-and-white (eerily reminiscent of Schindler’s List) and show a gaunt, near-death Harry living his nightmare, tortured by the decisions he makes, even though he really has no choice.

The Survivor tries to affect a conversation about the blurry line between complicity and survival, attempting to address the moral conundrum that many faced during the Holocaust—how far would you go to survive—but it is never really able to connect, as the film allows itself to get too distracted by other elements.

By far the biggest distraction of all is Foster himself. The monumentally impressive transformation that he makes in order to play this part is staggering, reminding one not just of DeNiro, but also of Christian Bale in The Fighter, Michael Fassbender in Hunger, and Matthew McConaughey in Dallas Buyers Club, all actors who committed to weight loss for roles so intensely, they were hardly recognizable and, in three of the four cases, were rewarded by the Academy for their dedication. Considering that Foster has been one of the most underrated actors in Hollywood for years, delivering great performances time and time again, most notably in 3:10 to Yuma, Hell or High Water and 2018’s Leave No Trace, which many believed should have been his first Oscar nomination, there’s no other actor more deserving of the opportunity. And there’s little chance that the Academy can overlook his performance here, as its degree of difficulty is high, as is the overall effort Foster puts into developing his character, from his accent to his gait, to specific mannerisms that all allow him to truly inhabit the role and deliver an impressive, hard to ignore performance.

But the problem with The Survivor, in the end, is that it is hard to see anything but the performance. Even though Foster is not as famous as those other actors and the average audience member might not be aware of how unrecognizable Foster is in the opening frame of the film, the staggering difference in the flashbacks is unmistakable, and it’s difficult for the audience to be focused on anything else. It’s too bad, because Foster does give the performance of his career, one that will undoubtedly be recognized by critics and his peers, deservedly so, but there is just not enough of a film around him to engage with it as a whole.

In the end, The Survivor falls into too many traps and tropes of the many genres it’s attempting to inhabit, from its standard biopic structure to its boxing movie ambitions to its Holocaust horrors, there is more effort put into taking the audience through moments in time, rather than allowing us to sit in any of them. It’s clear that Levinson wanted to make the most of Foster’s talents by letting him show a wide range of emotions and scenes—even showing Haft’s dry comic wit—but showcasing a performance can sometimes be to the detriment of the overall film, and The Survivor certainly suffers that fate.

But, even so, there is no denying this is a film worth seeing, for Foster’s performance is a staggering achievement. As for the rest of it, though, there’s not much you haven’t seen before, and, sadly, not much that will make much of an impression.