Movie Review: The Nice Guys stumble their way into hilarity 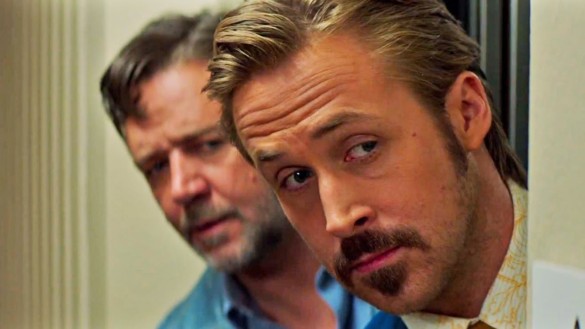 DIRECTION
Shane Black has certainly cultivated his own following over the years, which started with his Lethal Weapon connections, then picked up steam with the cult-hit Kiss Kiss Bang Bang and finally going mainstream with Iron Man 3 back in 2013. The way Black conjures unique characters in crazy situations with clever plot developments is quite impressive, so it’s no surprise he’s been able to find an audience. He’s able to use simple tactics that make for a fun, movie-going experience and The Nice Guys is no different. From a direction standpoint, Black’s biggest victory are the performances he gets from Ryan Gosling and Russell Crowe, who carry (almost) everything in this film. Black uses some great editing techniques to deliver some humor and his camera work at time amplifies the chaos of the story, but it’s mostly Gosling and Crowe who make those elements engaging. Still, you have to credit Black as a director for, not only gathering those performances, but taking advantage of them by being deliberate with how he pursued those characters. There are moments where Black will set up a certain notion before pulling the rug out from under you. The narrative may be a little overwritten but Black is purposeful in his direction and he makes certain themes feel visceral, and simply hysterical, by being as intentional as he is in this film.

SCRIPT
Shane Black the director is a treat in The Nice Guys but as a writer, he and co-writer Anthony Bagarozzi do stumble a bit. The Holland March (Gosling) and Jackson Healy (Crowe) characters are compelling in their own right and their scenes together are a riot. And as mentioned above, Black and Bagarozzi are deliberate in their approach to the individual characters. March is a private investigator but he’s somewhat of a mess and everything he does seems to go wrong. Yet, he also has moments where he showcases he’s very capable of being a good P.I. We see several scenes where you think March has fallen down the rabbit hole and climbed out of it before Black undercuts your expectations and we see March is still in the hole. Healy is more of the straight-man here but he also has a few surprises along the way.

Now, the irony in all of that, while Black and Bagarozzi are deliberate with the March and Healy characters, the film overall feels too calculated. The screenplay pays attention to the details in parts but loses clarity on the whole. As a result, the characters are fascinating but the overall narrative never knows what it wants it to be. And while The Nice Guys is meant to be a set-up for fun banter between March and Healy, the aesthetic of the film isn’t structured like Paul Thomas Anderson’s Inherent Vice for example, where the disjointedness of that narrative is purposefully all over the place to symbolize a drug-fueled state of mind. The plot does have it’s purpose in The Nice Guys and therefore it’s lack of clarity isn’t well earned.

Additionally, there’s exposition and a few major developments that are lazily written and become extensively contrived, halting any momentum the film does build. There’s especially a big mishap with a certain character near the third act where this character makes a sudden left turn that has zero explanation. Some may argue that none of that matters but the film’s lack of clarity does hinder the overall experience. The Nice Guys goes out of it’s way to set up a mystery but then decides it doesn’t care to answer it fully, which will leave some audiences frustrated.

THEMES
The screenplay may be a bit messy but thematically there’s some interesting notions here about parenting, the effects of sex and violence on children and how that effects parent/kid relationships. However, the heart of the film is centered around these ideas of innocence and virtue in a world lacking those convictions, which ultimately ties beautifully with those aforementioned notions. The opening scene of the film see’s a young boy witness a car crash, who then proceeds to the crash to find a naked woman lying on the ground. He takes an action that opens up the idea of virtue in a moment where his world was not innocent. This through line is carried robustly by Holly March (Angourie Rice), the daugther of Holland, who is the moral compass of The Nice Guys. Continually throughout the film, she finds herself in situations of indecency, violence and even L.A. smog (beautiful symbolism), yet she yearns for that virtue and innocence that no one else seems to care about. Black wonderfully juxtaposes those realities and ties them in perfectly to the progression of the (Holland) March and Healy characters.

PERFORMANCES
It goes without saying but Gosling and Crowe are great in this film. Gosling’s physical comedy and charming attitude is quite impeccable and how that rubs up against Crowe’s intimidating but sympathetic presence is amazing. As great as they are, one could argue that Rice is even better. Narratively, Holly may stifle some of the film’s momentum and she is put in situations that are somewhat eye-roll worthy but Rice’s performance is stellar and the way she carries the film’s themes is impressive for her age. On the flip side of that coin, Kim Basinger gives a rather bad performance and the use of her character is wasted. Keith David and Matt Bomer are cartoon characters but given the film’s second half chaos, they somewhat work here.

SCORE / SOUNDTRACK
David Buckley and John Ottman get the nod to score here and while overall it’s nothing too memorable, it does fit the 1970’s aesthetic quite well. The soundtrack is the real winner here, featuring hits from the The Temptations, KISS, Earth, Wind & Fire, Bee Gees and more. The soundtrack and the score do work well together and helps engage the audience into the world Black is creating.

FINAL THOUGHTS
Let’s be clear. Yes, the screenplay has it’s flaws and some of the performances aren’t great, but the film overall is still entertaining. It’s maybe a disappointment if you’re a big fan of Shane Black but the witty dialogue and alluring characters make up for wherever the film is a letdown. There are some affecting scenes between Holly and Holland, as well as Jackson, that crystalize the film’s main themes and motives in satisfying fashion. The nods to Chinatown are quite apparent but effective in homaging the classic. In fact, our good friend Josh Larsen said it perfectly in a tweet, where he said The Nice Guys is like Chinatown after it’s had a few drinks. That is a perfect summation of The Nice Guys because while the film narratively and aestetically does nod it’s head toward Chinatown, it stumbles around, slurs it’s speech and acts completely random at times. Like a good friend who’s drunk and doing silly things, you just can’t help but laugh at them.